March Mother Gray and the Long Run for Life

“She relied upon one power to guide her: the power of the Holy Spirit. She revealed it to be more effective than all the political strategy this world could formulate,” Marjorie Dannenfelser, president of the Susan B. Anthony List said in tribute to Nellie Gray, founder of the March for Life, who died on Monday at age 88. What a beautiful thing to be able to say about a person! And the spirits Gray lifted, witness she inspired, and the healing she made possible throughout the last 40 years of legal abortion does speak to a power beyond and yet in us. 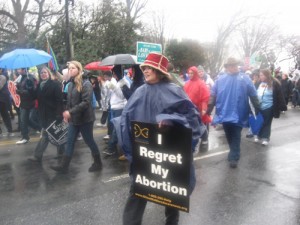 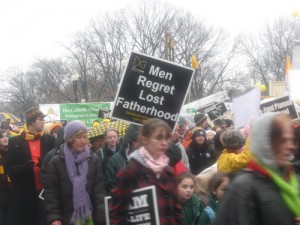 Pat Castle is a LtCol medical support squadron commander at Ellsworth Air Force Base in South Dakota who co-founded LIFE Runners (LIFE here = Living In Faith Exchange), a group of marathoners who got together one day to put their marathoning to use for the cause of defending and protecting innocent human life. (Full disclosure, I’m on the advisory board.) As president of LIFE Runners, which also e-mails daily devotions written by group members and friends, Castle became friends with Nellie Gray, the founder of the March for Life, just in the last year. Castle spoke at the most recent March for Life and was talking with Gray about a run before the March marking the 40th anniversary of the Supreme Court’s Roe v. Wade decision. He talks about the encouragement she gave him.

KJL: Why are Nellie Gray and the March for Life important?

CASTLE: Nellie Gray was an exceptional pro-life champion who rightfully stood for no exceptions regarding abortion. Her March for Life is a needed anchor in our culture where the value of life is eroding. Nellie was a living saint who understood the infinite value of life. The National LIFE Runners Team follows her lead here.

KJL: When did you first connect with Nellie Gray?

CASTLE: On Nov. 30, 2011, Anne Carmichael from the Vitae Foundation asked Nellie to consider inviting me to speak at the 2012 March for Life. By Dec. 1, I had an hour phone visit with Nellie, who believed God brought us all together. I called her “Ms. Gray” twice… each time she said, “I’m Nellie.” She told me that she was strongly Catholic, a World War II veteran, with 30 years of government civilian service, and a retired lawyer. She mentioned that the leadership of the March for Life is largely Catholic and includes many veterans and Knights of Columbus. I shared that the LIFE Runners are led by five Knights. She told me that her focus is Roe’s defeat, unity, and youth. I explained that LIFE Runners are focused on all three, too. I shared that we are rooted in prayer and devotion, and LIFE Runners is our “into the streets” action arm, like the March for Life). She liked the story behind how our jersey “REMEMBER The Unborn” came about at the Holocaust Museum before I ran the 2009 Boston Marathon.

I described how the LIFE Runners travel across the nation and pull together pro-life Christians from many different apostolates. She was really excited about the LIFE Runners A-Cross the Country Relay for Pro-Life being led by Jeff Grabosky and planned for Spring 2013. She liked that we are working with Students for Life (Youth). Nellie was considering LIFE Runners and three other grassroots projects for speaking at the Rally and asked me to call her back in two weeks.

Even if I didn’t wind up speaking at the March rally, the insights from Nelly were invaluable, a great grace.

Nellie did extend an invitation for me to speak for ten minutes at a mini-rally across from the White House on Jan. 22.

I saw Nellie for the last time in June. We talked about doing a 5k walk/run for Life the morning of the March for Life this coming January – she had already requested the Washington Monument area for us for 7-9 AM. This was the last of many holy visits with her … I miss her encouraging voice. Her inspiration and prayers will help us all continue to and speak up. She lived as LIFE Runners seek to, to stand for life “in Christ.”

KJL: Was there anything that surprised you as you got to know her?

CASTLE: I hadn’t known about her military experience and her deep connections with the Knights. She lived the mottos of the military – “Aim High”; “Be all you can be”; Non sibi sed patriae; “always faithful.”

KJL: How do you hope history remembers Nellie Gray?

KJL: How will you honor her legacy?

CASTLE: Give credit where credit is due. I am praying for the repose of the soul of Nellie Gray, and will ask for her intercessory prayers often while running for the unborn. 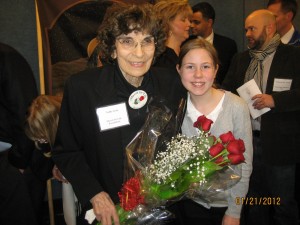 Nellie Gray and Pat’s daughter, Paige, at the Law of Life Summit, where Nellie was honored two nights before 2012 March for Life (Pat Castle emceed).

August 19, 2012 Getting Real
Recent Comments
0 | Leave a Comment
Browse Our Archives
get the latest from
Catholic
Sign up for our newsletter
POPULAR AT PATHEOS Catholic
1

Catholic
March for Life Is a Marathon
Kathryn Lopez