‘God Help Us If We Start Giving Government Officials the Right to Dictate Our Conscience’: Colson on Religious Liberty

As the Obama administration forces the likes of Hobby Lobby and Frank O’Brien into making choices Americans should not have to be making, a reminder from Chuck Colson, founder of Prison Fellowship, commenting on the HHS Mandate on National Review Online before he died earlier this year:

This is a huge religious-liberty question. It isn’t about contraceptives or even abortifacients. It’s about whether the United States government can limit the free exercise of religion by telling us which of our beliefs are entitled to conscience exemptions. It would be one thing if this came through the courts; still another thing if it were passed by Congress. But this edict is handed down by unelected government bureaucrats.

We cannot for one moment allow government bureaucrats to dictate the parameters of church doctrine. As a Christian, I believe our doctrine comes from the very clear and authoritative word of Scripture. It has been tested and practiced over the years; it has withstood the challenges. This, in our opinion, is God’s truth.

As one of the three co-authors of the Manhattan Declaration, I helped write those words at the end of the document: that we will render ungrudgingly to Caesar what is Caesar’s, but we will never under any circumstances render to Caesar what is God’s.

We wrote the Manhattan Declaration, now signed by 525,000 people, not as a petition but as a covenant. We have covenanted with one another to engage in civil disobedience if the government attempts to compromise what our founders believed was the most essential liberty to be protected: freedom of religion, freedom of conscience. That’s why it is often called “the first freedom.” If this edict stands, all freedoms will be in peril.

This is a momentous issue. There have been other threats to religious liberty by legislation and sometimes by court order — but never at the whim of an unelected government official.

God help us if we start giving government officials the right to dictate our conscience.

Catholic
Religion is Okay, As Long as It Don’t...
Kathryn Lopez 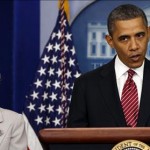 Catholic
Do You Know About Frank O'Brien?
Kathryn Lopez