Today is the feast of the Assumption of the Virgin Mary. Here's Dürer's portrayal of it http://t.co/2FhMuyEgN4 pic.twitter.com/OVrWopJqbu

3. From the Office of Readings for Dominicans today, from a homily by Saint John Damascene:

Once indeed God ejected the mortals and first parents of the human race from the paradise of Eden, when they had drunk deeply from the wine of disobedience and had become so affected by the hangover of sin through the intoxication of that transgression which led to the sleepiness of the mind’s eye. Now, however, shall not paradise receive her who repelled the onslaught of all sin, producing the seed of obedience to God and Father, and bringing forth life for all races of mortal men? How can death devour this truly blessed woman, who gave birth to the whole person of the Word of God through union with God? How can hell receive her? When Christ, who is the way and the truth, said Where I am, there will my servant be also, why would there not be a dwelling for his own mother with him with an even greater justification? It is well said that precious in the sight of the Lord God of Hosts is the death of his saints: but even more precious is the passing of the Mother of God from this life.

Then Adam and Eve, the founders of our race, exclaimed with a loud voice in great rejoicing: “Blessed are you, O daughter, who bore for us the penalties of the commands that had been broken. When you had gained a mortal body from us, you gave birth to a covering of immortality for us. You repaid us so that it might be well with us, since you received birth from our loins. From beyond the grave you have called us back to our ancient seat: we closed paradise for ourselves, but you made open the way of the tree of life. Through our actions sadness came forth from happiness; through you even more joyful things have returned from sorrow. In what possible way could you be acceptable to death, O Immaculate one? You are the bridge of life and the ladder to heaven: you are a boat over the sea of death reaching to immortality.”

But the woman herself, as she did not shrink from the truth, said: “Into your hands, my Son, I commend my spirit. Receive this soul which is dear to you, which you have preserved free from any sin. I hand over my body, not to the earth, but to you. Take me to yourself, that where you are, you, the child of my womb, so there I also may be your companion. I am hastening to you, who have often come to me on this side of that long distance.”

When she had said this, she heard in reply: “Come to my rest, my blessed Mother: arise, come, my beloved, most blessed among all women. Behold, the winter is ended. You are all fair, my beloved, and there is no spot of stain found in you: the odor of your ointments are more precious than all other aromas.”

#Mary’s life shows that God accomplishes great deeds through those who are the most humble. @Pontifex #Assumption pic.twitter.com/wXxsn8oNHg

Mary’s Assumption, the Pope said, does not concern Mary alone. Each of us is profoundly touched by this mystery, which reminds us of the end that awaits us. Our life is not a senseless wandering, but a pilgrimage that leads to the house of the Father, who waits for us with love. As we pass through this life, God shows us “a sign of consolation and sure hope,” the Blessed Virgin Mary, full of grace, who is blessed because she believed the word of the Lord. As members of the Church, the Pope said, “we are destined to share the glory of our Mother because, thanks to God, we too believe in the sacrifice of Christ on the Cross and, through Baptism, we are inserted into this mystery of salvation.”

Church of the Assumption of the Blessed Virgin Mary of @ArchPhilly in Wayne, PA pic.twitter.com/xQ8wjXiCK9

No hint of death’s pungent decay touches Mary. She is the first fruits of the hope for all humanity. #Assumption pic.twitter.com/MsGQWt5nmN

The Mother of God gave herself over to the will and purposes of God and in doing so, she is a model and exemplar of what it means to be a disciple of the Lord Jesus.
The way of a disciple is about giving ourselves over to the will and purposes of God. In doing this, we imitate Christ, who shows the humanity in its perfection is radically obedient to God.
Obedience to God is an act of trust. The Mother of God trusted in God, accepting the totality of her life’s experiences as imbued with the power and presence of God. Her trust was steadfast, even in the face of circumstances that were devastating and difficult, even in the face of death. The Mother of God trusted that God, who did not abandon her Son to the power of Death, would also not abandon her. This fidelity manifested itself in a life-giving fruitfulness that the power of death could not overcome.
May the Mother of God intercede on our behalf. May her witness of obedience inspire us to offer our own lives to Christ in acts of humility and love. May the Assumption of the Mother of God give us hope, that though this earth and all things in it pass away, God remains faithful, and in Christ, he will draw us through death so that we can she fully in the promises of his resurrection.

Remember who we are and where we belong #homilytweet #Assumption pic.twitter.com/syjS2RKEJA

She is our queen, a beacon of her Son, our Lord, Jesus Christ #homilytweet #Assumption pic.twitter.com/Px4ofH3lY0

13. I confess, I loved, loved, loved diagramming sentences in Mrs. Gertrude Gunset’s freshman English class at Dominican Academy and am very tempted to try to diagram this from the Office of Readings today:

Hence, the august Mother of God, mysteriously united from all eternity with Jesus Christ in one and the same decree of predestination, immaculate in her conception, a virgin inviolate in her divine motherhood, the wholehearted companion of the divine Redeemer who won complete victory over sin and its consequences, gained, at last the supreme crown of her privileges—to be preserved immune from the corruption of the tomb, and, like her Son, when death had been conquered, to be carried up body and soul to the exalted glory of heaven, there to sit in splendor at the right hand of her Son, the immortal King of the ages.

Heav'n with transcendant joys her entrance graced, next to his throne her Son his Mother placed. #Assumption #Ordinariate

Shrine of the Assumption in the parish Church of Saint John XXIII in Sotto il Monte. pic.twitter.com/Auto9zCxQe

On Saturday, day of the Assumption, Catholic churches in Europe will ring their bells in support of persecuted Christians. #ChristianBells

Mary, Woman clothed with the sun, help us to fix our gaze on Christ amid the inevitable sufferings and problems of everyday life.
Help us not to be afraid of following him to the very end, even when the cross seems unbearably heavy. Make us understand that this alone is the way which leads to the heights of eternal salvation.
And from heaven, where you shine forth as Queen and Mother of mercy, watch over each one of your children.
Guide them to love, adore and serve Jesus, the blessed fruit of your womb, O clement, O loving, O sweet Virgin Mary! 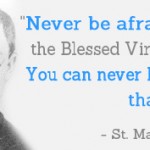 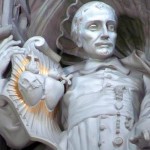 Extra Quotes from My Interview with...
On the Catholic Beat
Related posts from Kathryn Lopez 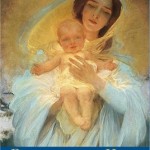 Catholic
Is This the Song of Our Lives?
Kathryn Lopez