1. Dominican Fr. Junipero talks about him:

We prayed for an increase of vocations to the priesthood through the intercession of Bl Junipero Serra at Mass today pic.twitter.com/YhshGaGt5a

Today we remember one of those witnesses who testified to the joy of the Gospel in these lands, Father Junípero Serra. He was the embodiment of “a Church which goes forth”, a Church which sets out to bring everywhere the reconciling tenderness of God. Junípero Serra left his native land and its way of life. He was excited about blazing trails, going forth to meet many people, learning and valuing their particular customs and ways of life. He learned how to bring to birth and nurture God’s life in the faces of everyone he met; he made them his brothers and sisters. Junípero sought to defend the dignity of the native community, to protect it from those who had mistreated and abused it. Mistreatment and wrongs which today still trouble us, especially because of the hurt which they cause in the lives of many people.

Father Serra had a motto which inspired his life and work, not just a saying, but above all a reality which shaped the way he lived: siempre adelante! Keep moving forward! For him, this was the way to continue experiencing the joy of the Gospel, to keep his heart from growing numb, from being anesthetized. He kept moving forward, because the Lord was waiting. He kept going, because his brothers and sisters were waiting. He kept going forward to the end of his life. Today, like him, may we be able to say: Forward! Let’s keep moving forward!

May a powerful gust of holiness sweep through all the Americas during the coming Extraordinary Jubilee of Mercy! Confident in Jesus’ promise, which we heard today in the Gospel, we ask God for this special outpouring of the Holy Spirit. There was so much holiness, so much holiness planted in America!

9. From one of his existing sermons, translated by Rose Marie Beebe in the book Junípero Serra: California, Indians, and the Transformation of a Missionary:

First, the Lord calls us by speaking to us in the vast interior spaces of our heart. He does this so that we can put aside our affection for fleeting things and give all our heart to the Lord himself. He speaks to us with a great, sweet, and gentle tone with which a father might address his favorite child.

ALSO: My cover essay for a new magazine published by the Archdiocese of Los Angeles on Saint Serra as a founding father of the U.S. and what that means for us.

Serra as Saint for the Jubilee of Mercy.

From last July: “Why Is Pope Francis Canonizing Junípero Serra?” 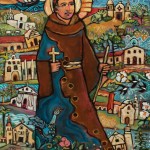 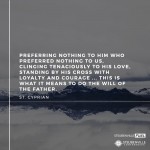