“Expect Surprises”: Archbishop of Canterbury’s Remarkable Interview at the World Council of Churches

The Archbishop of Canterbury has hinted that we should expect “a few surprises” in terms of ecumenical relations between the Anglican Communion and the Roman Catholic Church.

Archbishop Justin Welby, the Archbishop of Canterbury and head of the Anglican Communion, is in Busan, South Korea, attending the 10th Assembly of the World Council of Churches.  In his address to the Assembly, he noted that the WCC Assembly really reflects the depth and breadth of God’s great Church; and he called members to recommit themselves to the task of restoring full, visible, sacramental unity to the Body of Christ.  “We must be one,” he said, “so that the gospel we preach is not denied by the way we live our separate lives.”

In an extraordinary interview with Philippa Hitchen of Vatican Radio, Archbishop Welby also spoke with conviction about the importance of Christian unity, and expressed his hope that the participating churches will work fervently on the important doctrinal and dogmatic differences between them

“…in the context of churches and ecclesial communities that say no sacrifice is too great to be obedient to the call of Christ that we may be one.”

“Perhaps,” the Anglican Archbishop mused, “we need to reimagine what it means to look like the church and to surrender some of the things that give us our sense of identity in the cause of Christ.”

Archbishop Welby is primate of the 80 million member Anglican Communion, which is the third largest Christian denomination in the world, after the Roman Catholic Church and the Eastern Orthodox Churches.  However, his opinion is not binding for others in the Anglican Communion; there is no single “Anglican Church” with universal juridical authority, as each national or regional church has full autonomy.

Both Archbishop Welby and Pope Francis assumed their leadership roles in their respective churches in March 2013; and the two met for the first time in June.  From the start, they seem to have established a friendship of respect and common concerns.

Recently, Archbishop Welby spoke of the spiritual gift of the Catholic sacrament of reconciliation, and encouraged members of his flock to “Do like the Catholics, and go to confession.” 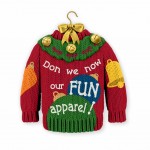 November 1, 2013
The Hallmark Ornament Kerfuffle: There’s No Way to Win in the PC Wars
Next Post

November 5, 2013 Apostolic Nunciature in Damascus Is Bombed; No Casualties
Recent Comments
17 Comments | Leave a Comment
Browse Our Archives
get the latest from
Catholic
Sign up for our newsletter
POPULAR AT PATHEOS Catholic
1