On May 8, the Leadership Council of Women Religious (LCWR) issued a statement on their April 30 meeting with the Congregation for the Doctrine of the Faith.

The statement is significant in that it’s a hopeful sign that the organization has heard the concerns expressed by Rome and may, in fact, be ready to listen–valuing its canonical status which has been conferred by the Holy See more than it values its autonomy.

Because it’s so important a document, I’m permitting the Sisters to represent themselves, reprinting it below in its entirety.

First, the background.  I outlined the problem in my May 4 post.

On April 30, leaders from the LCWR, the Leadership Council of Women Religious, were called on the carpet by the Congregation for the Doctrine of the Faith.

CDF Prefect Cardinal Gerhard Müller, in explaining Vatican concerns regarding the organization which claims to represent 80% of women religious in the U.S., reiterated the trio of problems cited in the Vatican’s Assessment of the group.  Those concerns centered around the speakers at the LCWR Assemblies; the policies of corporate dissent on issues like women’s ordination; and the prevalence of radical feminist themes incompatible with the Catholic faith in some of the programs and presentations sponsored by the LCWR.

Cardinal Müller expressed concern that despite Vatican efforts to bring the group into alliance with Catholic teaching, the LCWR had bypassed the rigorous pre-approval process put in place by the CDF and had announced that it would award its highest honor to Sr. Elizabeth Johnson, a theologian whose work has been found by the USCCB Committee on Doctrine to contain “misrepresentations, ambiguities, and errors that bear upon the faith of the Catholic Church as found in Sacred Scripture, and as it is authentically taught by the Church’s universal magisterium.”

While the CDF had focused specifically on Johnson’s most recent work, The Quest for the Living God, her earlier works have also been problematic.  For example, She Who Is: The Mystery of God in Feminist Theological Discourse embraces “the feminine God”, rejecting the Trinitarian formula revealed by Christ in Scripture, in which God is Father.

Sociologist Anne Hendershott, writing in Crisis Magazine, is harsh in her characterization of the problem with the U.S. nuns, whom she describes as “intractable”:

Like recalcitrant teenagers, taunting their teachers with their latest refusal to submit to authority, the Leadership Conference of Women Religious—an organization that represents more than 80 percent of the more than 50,000 Catholic women religious in the United States—has finally been publicly rebuked by the Vatican.  After several decades of trying to persuade the intractable women religious to comply with the teachings of the Catholic Church, Cardinal Gerhard Muller, head of the Vatican’s Congregation for the Doctrine of the Faith, issued a strong statement on April 30, 2014, demanding that the group return to the “ecclesial center of faith in Christ Jesus the Lord.”

Hendershott continues, explaining why this single action, awarding their highest honor to Sr. Elizabeth Johnson, is evidence of the continuing dissent within the LCWR:

“The choice of Sr. Johnson as honoree was clearly calculated to demonstrate the LCWR’s contempt for the teaching authority of the bishops….  Honoring Sister Elizabeth Johnson—a theologian who has devoted her career to denouncing as a “tool of patriarchal oppression” the traditional masculine language for God, including God the Father, Son, and Holy Spirit—was itself a statement of resistance.”

And Anne has a stern recommendation:

Perhaps it is finally time to stop cajoling and flattering the dissident women religious.  While well meaning, the constant accolades given to these women for their many sacrifices on behalf of the Church is misplaced.

As evidence of this flattery, Hendershott cites a 2013 speech by Archbishop Carlo Vigano, the Vatican’s apostolic nuncio to the United States, in which he told the annual gathering of the LCWR in Orlando,

“the Holy Father… is most thankful to you for all the good you have done throughout the years…. By the sacrifice of your own lives you have been deeply touching other people’s lives, bringing hope and healing, helping to form minds and hearts in the image of Jesus.”

Likewise, Archbishop Sartain,  the apostolic delegate charged by the Vatican with helping to bring the LCWR back into communion with the Church, tried to build collaboration by heaping on praise, telling the 2013 annual Assembly that he was there as “your brother and friend.”  Archbishop Sartain ended his remarks by claiming a closeness in his relationship which has been disproven by the LCWR’s recent actions:

“…we have developed a wonderful respect for each other and, yes, I would say a friendship with one another.”

One wonders if he didn’t at some point sit back and think, “Well, THAT didn’t work!”

[Silver Spring, MD] Over the past several days, there has been much public commentary on the opening remarks of Cardinal Gerhard Müller, Prefect of the Congregation for the Doctrine of the Faith, to the presidency of the Leadership Conference of Women Religious (LCWR) at their annual meeting April 30, 2014.  In a public statement after the promulgation of the Cardinal’s beginning remarks, in separate releases, both Archbishop J. Peter Sartain, archbishop delegate overseeing the implementation of the CDF mandate, and the LCWR presidency affirmed the accuracy of the Cardinal’s remarks and commented on the positive conversation that followed. For LCWR, this conversation was constructive in its frankness and lack of ambiguity. It was not an easy discussion, but its openness and spirit of inquiry created a space for authentic dialogue and discernment.

The meeting with CDF must be viewed within the context of LCWR’s entire visit to Vatican dicasteries.  In our first visit on April 27 to the Pontifical Council for Social Communications, Monsignor Paul Tigue, Secretary, shared that Pope Francis insists upon creating, as part of the New Evangelization, a culture of encounter, marked by dialogue and discernment. We experienced this culture of encounter in every Vatican office we visited in the Curia, an encounter marked by genuine interaction and mutual respect.

We also experienced the Church Universal as we learned about the many international meetings the Holy Father has convened and is planning to convene, addressing global issues like the economy, environment, family life, hunger, poverty, water, violence, human trafficking, and the desire to engage all people – the young, the old, the rich, the poor in communion, working together for the common good of the planet. We felt the energy flowing from these initiatives which are not new for the Vatican but have a renewed sense of urgency and possibility.

In our meetings at CDF, LCWR was saddened to learn that impressions of the organization in the past decades have become institutionalized in the Vatican, and these institutionalized perceptions have led to judgments and ultimately to the doctrinal assessment. During the meeting it became evident that despite maximum efforts through the years, communication has broken down and as a result, mistrust has developed.  What created an opening toward dialogue in this meeting was hearing first-hand the way the CDF perceives LCWR. We do not recognize ourselves in the doctrinal assessment of the conference and realize that, despite that fact, our attempts to clarify misperceptions have led to deeper misunderstandings. This is a very complex matter, yet LCWR was heartened by the attempt of both CDF and LCWR to find a way through that honors the integrity and mission of both offices.

Passion for all that the Church can be deepens our commitment to stay at the table and talk through differences. We want to be part of the universal Church rooted in the Gospel, a Church that hears the cry of the poor and is united in its response. At the same time, we cannot call for peace-making in Syria, the Middle East, in South Sudan, unless we too sit at tables with people who hold varying views and work patiently and consistently for a genuine meeting of minds and hearts.

In some ways, for LCWR, nothing has changed. We are still under the mandate and still tasked with the difficult work of exploring the meaning and application of key theological, spiritual, social, moral, and ethical concepts together as a conference and in dialogue with the Vatican officials. This work is fraught with tension and misunderstanding.  Yet, this is the work of leaders in all walks of life in these times of massive change in the world.

At our meeting with the CDF officials, we experienced a movement toward honest and authentic conversation on some of the matters that lie at the heart of our faith and our vocation. We have come to believe that the continuation of such conversation may be one of the most critical endeavors we, as leaders, can pursue for the sake of the world, the Church, and religious life.

No interviews will be given at this time.

May 8, 2014
Take the Jonathan Swift Challenge: How Else Can We Utilize the Corpses of Babies?
Next Post 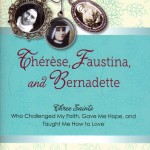 Catholic
Ordinariate of the Chair of St. Peter Just...
Seasons of Grace
TRENDING AT PATHEOS Catholic