Ordinariate of the Chair of St. Peter Just Got Its First Bishop 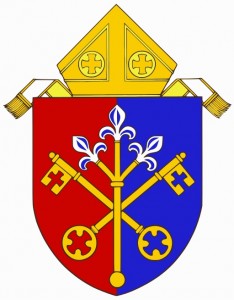 Just announced: Pope Francis has appointed Monsignor Steven J. Lopes to be the first bishop of the Personal Ordinariate of the Chair of St. Peter.

The Ordinariate is a structure equivalent to a diocese, but serves Roman Catholics who were nurtured in the Anglican tradition.  The Ordinariate provides a path for groups of Anglicans to become fully Roman Catholic, while retaining elements of their worship traditions and spiritual heritage in their union with the Holy Roman Church. At present the Ordinariate, which is headquartered in Houston, Texas, has more than 40 Roman Catholic parishes and communities across the United States and Canada and is served by 70 ordained Roman Catholic priests and deacons.

Bishop-elect Lopes was ordained to the priesthood in 2001, and he has served since 2005 as an official of the Vatican’s Congregation for the Doctrine of the Faith. He will be ordained a bishop on February 2, 2016 in Houston.

The appointment of Bishop-elect Lopes precedes next week’s implementation of the Ordinariate’s new missal. According to a press release from the Personal Ordinariate:

Bishop Lopes’ appointment comes just five days before the Ordinariate begins using Divine Worship: The Missal, a new book of liturgical texts for the celebration of Mass in the Personal Ordinariates around the globe. The texts were approved by the Vatican for use beginning the first Sunday of Advent, Nov. 29, 2015.

Bishop-elect Lopes was directly involved in developing these texts for worship; since 2011, he has served as the executive coordinator of the Vatican commission, Anglicanae Traditiones, which produced the new texts.

The new missal is a milestone in the life of the Ordinariate, since the Ordinariate’s mission is particularly expressed through the reverence and beauty of its worship, which shares the treasury of the Anglican liturgical and musical traditions with the wider Catholic community.

There are three Personal Ordinariates in existence:

Bishop-elect Lopes is a Catholic priest of the Archdiocese of San Francisco, and spent the first years of his priesthood as associate pastor at two parishes: St. Patrick Catholic Church in San Francisco, and St. Anselm Catholic Church in Ross, California. He attended Catholic schools in California, including the St. Ignatius Institute at the University of San Francisco. He earned licentiate and doctoral degrees in sacred theology at the Pontifical Gregorian University in Rome.

Bishop-elect Lopes will be introduced at a press conference later today in Houston.