A Pencil in God’s Hand: Mother Teresa’s Story Comes to the Big Screen

Anjezë (Agnes) Gonxhe Bojaxhiu was only twelve years old when she first felt the call to become a missionary to India. At the age of 18 she joined the Sisters of Loreto, with the hope of serving in missionary work. For fifteen years, she lived in a convent in Darjeeling and Calcutta, teaching school to local girls.

Then, while traveling by train from Calcutta to Darjeeling for her annual retreat, she experienced what she called her “call within a call.” Later repeating the message she heard from God, she wrote in her diary,

“Our Lord wants me to be a free nun covered with the poverty of the cross.

She explained that Divine call, saying,

“I was to leave the convent and help the poor while living among them. It was an order. To fail would have been to break the faith.” 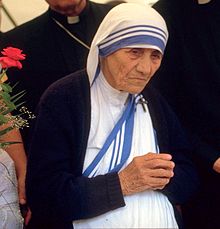 She eventually petitioned Rome for permission to begin a new religious order, which she called the “Missionaries of Charity.” She became known as Mother Teresa, and she and her new community sought to serve

“…the hungry, the naked, the homeless, the crippled,

the blind, the lepers, all those people who feel unwanted, unloved, uncared for throughout society, people that have become a burden to the society and are shunned by everyone.”

This week, the Holy See quelled rumors first published in Italy’s Catholic newspaper Vatican Insider that Mother Teresa would be canonized (named a saint) on September 4, 2016, during the upcoming Jubilee Year of Mercy. Fr Ciro Benedettini, vice director at the Holy See Press Office, denied the reports, clarifying that since the investigation into her life (the cause for canonization) is still ongoing, announcing the date for canonization is purely speculative. 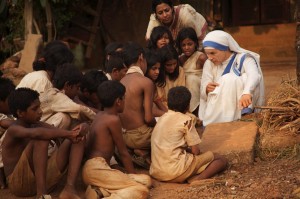 Mother Teresa’s story is told in THE LETTERS, a new film written and directed by William Riead, scheduled to open in theaters on December 4, 2016.

Not a documentary, THE LETTERS is a love story of sorts–a telling of Mother Teresa’s unfaltering love for Christ, and for the “poorest of the poor” that He entrusted to her care.

In the starring role, four-time BAFTA Award nominee, British actress Juliet Stevenson accurately conveys Mother Teresa’s commitment and strength, and yet reveals something of her loneliness and her deep personal desolation–what came to be called her “dark night.”

If you’ve not heard Mother Teresa’s story before–or if you have, and you want to experience its poignancy and be inspired by her selfless abandonment of riches and an easy life in order to do God’s will–you’ll want to see THE LETTERS.

For more on The Letters visit the Patheos Movie Club here.