Pope Francis Finally Gets His Pizza! 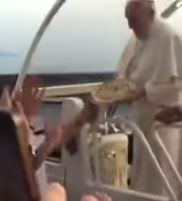 A few weeks ago, in an interview with the Mexican broadcaster Televisa, Pope Francis expressed his wish that he could wander incognito onto the streets of Rome and get a pizza.  “The only thing I’d like to do,” he said,

“…is to be able to go out one day without anyone recognizing me and go get a pizza.”

Well, he finally got his wish!  On his visit this week to the Italian city of Naples, a custom-made pizza was delivered to him in the Popemobile by Enzo Cacialli, co-owner of Pizzeria Don Ernesto.  The white and yellow pizza featured yellow cherry tomatoes and buffalo mozzarella.

A YouTube video shows Cacialli waiting until the last minute, then climbing over a barrier and handing Pope Francis the pizza as his vehicle sped past. The Pope graciously accepted and said, “Thank you.”

March 23, 2015 Appreciating Mary in a New Way
Recent Comments
0 | Leave a Comment
Browse Our Archives
get the latest from
Catholic
Sign up for our newsletter
POPULAR AT PATHEOS Catholic
1