Redeemed by Grace: Another Abortion Worker Comes Over to the Side of Truth

Redeemed by Grace: Another Abortion Worker Comes Over to the Side of Truth April 26, 2015 Kathy Schiffer

Through the years, I’ve met several people who have worked in the abortion industry, and who have then experienced a dramatic conversion and joined pro-life forces: 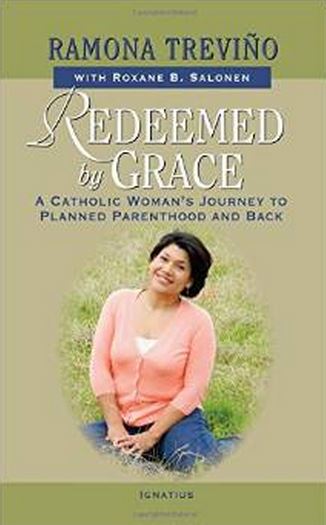 The newest name on that list of dramatic transformations is Ramona Treviño.

She’s not a convert to Catholicism–No, Ramona was Catholic even during the years she worked for Planned Parenthood, even while she referred young women for abortion.  And while that may seem puzzling, she was not the only Catholic who hadn’t fully understood the seriousness of abortion, which takes the life of a child created in the image of God.

In her new book Redeemed By Grace, Ramona tells the fascinating story of her exodus from Planned Parenthood and her new life as a pro-life advocate and Catholic speaker.

In the early chapters, the reader could sense her confusion.  As manager of a Planned Parenthood clinic in Sherman, Texas, Ramona had the responsibility of referring women for abortions.  How could she reconcile her work with her faith in God and her pro-life views?

The internal conflict grew greater until finally, in 2011, she could no longer refer women for abortions or offer false assurances of risk-free sex.  She had to step away.  The peace and assurance she felt, and the warm support of pro-lifers who showered her with the love of Christ, made it easier to take that leap of faith and leave a financially secure position for an unknown future.

I loved reading Ramona’s story.  There were a few things, though, that touched my heart in a special way:

First, the Radio Connection:  Ramona’s journey home to her Catholic faith is a familiar one, yet it’s unique.  I was especially touched to know that she had been accompanied on her journey by Catholic radio–listening to her car each day as she drove to and from the clinic.  I worked for a number of years at Ave Maria Radio; and I knew some of the talented and holy staff at Guadalupe Radio, the Catholic network that reached out to Ramona on her car radio in Texas.  At the radio station, we frequently heard stories of people whose lives had been changed after listening to Catholic radio; but Ramona’s story was a heartwarming reminder of the power of the microphone.

And second, the warmth of the pro-life demonstrators:  I know from my work on the board of Mother And Unborn Baby Care, a local crisis pregnancy center here in Michigan, that pro-life people are truly good.  I’ve seen volunteers accomplish so much with such limited resources, and expect nothing in return.  Ramona was understandably nervous about facing these people, who were so opposed to the work she had been doing that they prayed outside her clinic for lives to be spared.  Yet when she finally crossed the threshold and approached the people who had been her enemies, she found them to be friendly, forgiving, and quick to offer assistance to help her find a new job.

Catholic
The Christmas Plains: A Sentimental Classic from Joseph...
Seasons of Grace
TRENDING AT PATHEOS Catholic