Lean into it, Witch: A Squid, Hekate Einalian and Magick

There are times when the point of my witchery is to accept things as they are rather than trying to change them. I learned this lesson from Hekate Einalian, a squid, and a dear friend’s cancer.  Hekate as Einalian is Queen of the Sea. Through Her wisdom, I’ve learned that leaning into the raging waves of life is a lot easier than fighting against them.  There are times when we need to conjure up faith rather than try to change fate.

A big part of my practice of Modern Hekatean Witchcraft is exploring what a virtuous life means to me. A lot of the time, this requires a very active sort of witchcraft that is designed to change circumstances and outcomes. However, sometimes the most radical thing I can do is to accept things as they are. 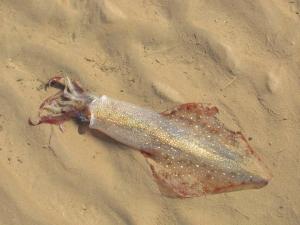 Us vs. the Squid

A few years ago, a dear friend was diagnosed with terminal lung cancer. Before she began her treatment journey, we decided to get away from it all. We set out for an adventure along the Minas Basin here in Nova Scotia, along with another friend who was, admittedly, the ring leader of this initiative.

While we were meandering along the shore of beautiful Scott’s Bay, our fearless leader noticed a beached squid in the mud along a tidal brook. After investigation, the two of us decided that the squid was alive (not sure how we did that) and that it needed to be returned to the sea. We somehow – just the two of us because our friend with cancer was too busy laughing at us to help – got the squid into the water.

Pleased with ourselves for returning one of Hekate’s creatures to the ocean, we watched it swim away. For about fifty feet. Then it appeared to intentionally beach itself again. My laughing friend, Joyce, found this even funnier. “It doesn’t want to be saved. Leave it alone you two!” she said between bouts of hysterics. We would-be squid saviors looked at each other, shrugged and agreed. The squid didn’t want to be saved. It had leaned into the inevitable.

As my brave friend progressed in her cancer journey she leaned into it. While she tolerated our healing circles, advice and inedible-but-supposedly-cancer-curing soup, she quietly went about radically accepting the fate she shared with that squid. To be honest, we found the soup hidden in her freezer. She was doing terminal cancer her way. If she didn’t want to eat the soup, she wasn’t going to.

I struggled mightily with her approach. I wanted her to rage against her cancer like I was. She wasn’t doing enough! We had to cure her! What Joyce knew, and I didn’t, was that sometimes we must accept life as is. If she had to have terminal cancer, then she was going to enjoy what was left of her life and that didn’t include nasty soup. It did include lots of laughter, good times, and doing whatever she felt like. Because she had leaned into it, she was free to make the most of the cancer instead of using her depleting energy fighting against it.

Bailing out of the Cancer Boat

At the time, I couldn’t handle her approach. I eventually moved away and used this distance as a means of psychologically separating myself from her.  I couldn’t sit in Joyce’s boat riding the cancer waves alongside her. Looking back I wish I had been able to deal with my own resistance to her cancer so that I could have spent more time with her. When I received word that she was near death, I went out back and lit a big fire to help her transition. I left it raging so I could go inside to check on her status. By the time I got inside, the fire had inexplicably gone out. 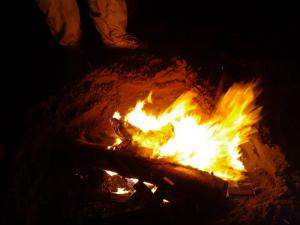 The Fiery Gift of Acceptance

As I looked out the window, I felt her pass through the veil and collapsed into tears. A few minutes later I learned that she had died at the time the fire went out. I believe that she gave me some of her acceptance when she left this life. As we planned her memorial service, I decided to leave my romantic partner. I had been fighting so hard to save something – our relationship – that was long dead. What would Joyce do? I asked myself. She would lean into it. She would leave. Some things can’t be saved. My dream of a perfect blended family was dead.

During the next few weeks, I was doubly grieving. It was a difficult time. One day I escaped the turmoil and drove out to Prospect, looking for this trail someone had mentioned to me. Immediately I felt so at home in the village, but I could not find that trail. On the wharf, I thought to myself that I belonged her. I have always loved the ocean – I come from a long line of fisherman – but had never even thought about living right on the coast even though I routinely hiked and did witchery on the shores of Nova Scotia. Here, a voice whispered to me, this is where you will find peace. I believe Hekate Einalian was that voice.

The next year and a half of my life was turbulent. Although I had leaned into ending that relationship, I hadn’t accepted other things at all. I spent a lot of time hiking along that trail I couldn’t find the first time, trying to sort myself out. I expanded my devotion of Hekate to include Her as Einalian, which means “of the Ocean.” I found solace in the waves while the storm of my life rage around me. As Queen of Land, Sea and Sky I had to put my trust in Hekate for only She could help me out of the mess I was in. More importantly, I had to trust that I already had everything I needed to fix my life, but before I could do that I slowly began to accept my life as it was. I learned to lean into it. 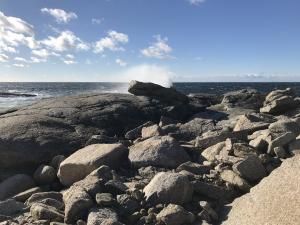 But, here’s the thing – magick is about creating energy with an intention to bring about a desired outcome. I succumbed to temptation during this time, engaging in magick designed to bring about a quick resolution to my woes. It either didn’t work or it backfired gloriously. Even when I’m doing the wrong thing, I’m still a very effective witch.

Instead of trusting Hekate’s wisdom, I was attempting to manipulate things – people, situations, the weather – even though I had no business doing so. That doesn’t sound much like leaning into it, right? Sometimes the witchery needs to be about helping us accept the inevitable rather than to effect change. We need to conjure up faith rather than try to change fate.

Sometimes you’ve got to lean into it, witch.

PS – I live in that little fishing village. Through what can only be interpreted as divine intervention, I found out through word of mouth about a house here. I recently bought a house just about the road from the rental. It took some time. I had some things to learn. Especially acceptance. Now, I live surrounded by the splendor of Hekate Einalian.

PPS – The day for expressing devotion to Hekate as Queen of the Sea is the eighth day after the full moon. 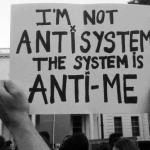 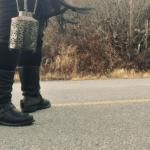 December 28, 2017 Confessions of an Outlaw Witch
Browse Our Archives
Follow Us! 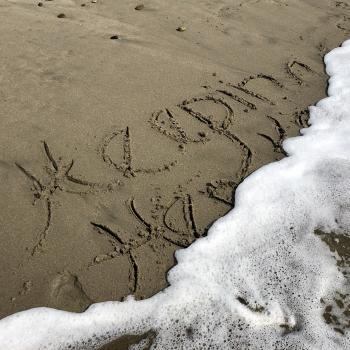