Last week I embarked on a nine week journey exploring balance using Modern Hekatean Witchcraft. In this installment, I contemplate the meanings of “dark” and “light” in all areas of my life, including motherhood and witchery. 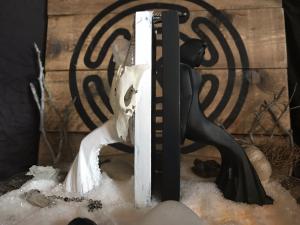 The Duality of Dark and Light

Last week, I introduced an exploration into balance using the Modern Hekatean Witchcraft perspective. This week, I turn my attention to the duality of dark/light. To learn more about the balance exploration project, you should read my introductory post.

I chose dark/light as one of the themes for this exploration because I am interested in how this duality plays out in every aspect of my life. I’ve written before about my preference for hanging out in the underworld and about my new commitment to being a day walker.

My goal now that I’m committed to be in the light (besides never forgetting my sunglasses) is to swing the pendulum of my life towards balancing all that dark with the light.

As I was contemplating what the duality of dark/light means to me, my eyes were drawn to a painting that’s near my desk.

The Dark and Light of Motherhood 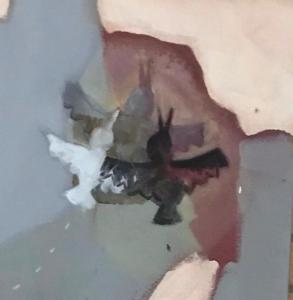 For me, the three birds symbolize myself and my two sons. I’m the big grey bird and they are the smaller ones. I am the mixture of light and dark, while one of the is light and the other dark. This reflects our personalities, as well. I am definitely a mixture of both colors, in all their various meanings and implications.

Blackbird by The Beatles

This song describes my oldest son well. He had a difficult time growing up mainly because he was in a horrible accident on his eighth birthday that led him through years of recovery, including too many surgeries too count (13, actually) including a transplant. He went deep into the underworld during his teen years. To top it off, his father was a rather difficult person, to say the least. Him and I went through hell together both with his recovery and in escaping from our rather horrible life with his dad. I promised him that we’d get out. I’ve kept my word. We live a very comfortable and safe existence these days.

It’s funny because the Beatles song means so much to me in terms of my relationship with my oldest son, but he doesn’t care for the band at all. My younger son, however, is a huge fan of them. He not only has different musical tastes than his big bro, he’s also different in just about every other way conceivable. Unlike my little white bird, my older son looks the part of his gypsy-dark Irish genes, while the other one is blue-eyed, fair and freckled. His life has been much lighter, too. His most dramatic personal injury story is the time he fell into a wooden planter and “split his head open, and the wood stuck out like a unicorn horn.” Not really. He didn’t even get stitches!

Then there’s me. A former long-term resident of Grey Street:

This used to be my theme song. I felt grey – broken, unsettled, and empty. Every day I give thanks that I don’t feel that way anymore. As for my boys, their purity of color has blended somewhat, too. No longer do I feel grey, and they aren’t so black and white. I think we’re a mixture of each color, rather than a blend into grey.

I’m Dark and Light, Not Grey

I love the color grey, but I hated being that color. I prefer being both dark and light. Over the arc of my life, I have spent a lot of time in the dark side of things, now I am more into the bearable lightness of being (if you haven’t read The Unbearable Lightness of Being you really should).

Magick is the same way for me. There is dark and there is light. Both exist. We can try to mix them together into grey, or we can just let them be as is – equally important aspects of ourselves, our personal witchery, and magick itself. When I mixed things together into a very grey, it massively sucked. I think balance is not in the mixing, but in holding quantities of both dark and light inside of me. Don’t shake the container that is you, let both dark and light exist in their natural state. Being grey is probably the worst possible way to be. It’s certainly not balance.

Let’s take a few moments to talk about “dark” and “light” magick and the balance of the two. I’ve never adopted a perspective of one or the other. I think magick is all things. It’s certainly not grey, but rather a combination of light and dark. Some people perceive what they call “light” magick to be positive and uplifting while “dark” magick is depressing and creepy. Folks on the dark magick side of the house practice going deeper into their own personal darkness and working with underworld energy. They often perceive practitioners of light magick – sometimes known as lightworkers – as head-in-the-clouds fluffy bunnies. In truth, self-identified practitioners of either approach are usually more complex than common stereotypes.

Furthermore, there can be confusion about the definitions of dark and light magick. Dark magick that is destructive in focus can be viewed as harmful, while light magick that is about manifesting dreams is seen as helpful. Neither is true. There are times when destructive dark energy is necessary in witchcraft, just like it is in our lives and the natural world. When I’ve needed to remove a horrible person from my life and my mundane efforts were either failing or I wanted to boost them, I turned to underworld magick and called upon Hekate Chthonia (Hekate of the Underworld). That is destructive in intention, not about the person but about destroying their connection with me.

The Problem with Light Magick

It is completely untrue that light magick is always beneficial. I’ve had it up to here with the “I can manifest anything with love and light” crew. No, you can’t. That belief is probably preventing you from manifesting anything at all. Dark magick is not always harmful, and light magick is not always beneficial. Either can be either. It’s all about intention. Moreover, it’s about knowing which type of energy – underworld or upper world – is required in any given situation. We can access either current.

Magick is about accessing these currents. Envision the metaphysical energy source as a mixture of black (dark) and white (light) rather than a blending into grey. To clarify, I am using “dark” to refer to underworld energy and “light” as a reference to the upper world.  Dark energy is dense and heavy, while upper world is lighter and refined. Moreover, underworld energy is the land of emotions, while upper world energy is the realm of intellect. They are types of energy, not moralistic approaches. As humans, we walk in the middle world, the color of which is red to represent the life force of all living things. You could say that in magick, when black and white come together they make red. Not coincidentally, these three colors are strongly associated not only with witchcraft, but with Hekate.

Hekate: The Dark and Light Mother of All

Hekate as The Dark Mother is commonly held outside of the world of her devotees. As a devotee, I know she is so much more than Her underworld aspects. In fact, I did an analysis of her many epithets using my handy spreadsheet. I used the codes of “dark,” “light,” and “neither.” Out of all the ancient epithets on my list, I coded 20% as “dark,” 24% as “light,” and the remaining 56% were “neutral.” According to the date, Hekate is more Soteira (Savior) than Nekyia (Mistress of Corpses).  If you’re interested in how I defined these terms, get in touch with me. If you want to know more about Hekate’s many epithets, read this.

My point is that the ancients saw Hekate as more than a dark goddess just like modern devotees do. She embodies both light and dark, like magick and every one of us. By studying all of Hekate’s epithets, I have learned that balance is not holding equal amounts of the same thing, or about the midpoint on a continuum between two opposites. It’s about being all things, respecting them and figuring out where I am most comfortable.

In order to determine where I am most comfortable – my definition of balance – it’s been necessary for me to go beyond my previous limits. It can be tempting to stay within our comfort zone, regardless of whether we are in the dark or the light when it comes to our mindset and magick. Finding balance requires getting up from our metaphysical comfy chair so we can go on an adventure towards the other end of the spectrum. Only through exploring both our internal dark and light attributes and experiences can we develop further. The same goes for magick, wandering towards the opposite end of where we are most at home can result in expanding our metaphysical understanding and our witchy skillset.

I’ve been writing lots about my own journey out of the underworld. I’m still quite new to being a day walker – my relationship with my angelic spirit guide is in its infancy. Although I don’t see fuzzy hearts and unicorns in my magickal future, I am keeping an open mind. Maybe there is more to life and magick than Grey Street. 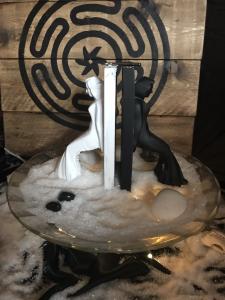 The Dark and Light Altar and Journey

As part of my balance project, I created an altar representing darkness and lightness. For the altar cloth I used black silk and I cast a salt circle around the base to give a magickal protective boost while I contemplated the areas of darkness and lightness in my own life. I used the two figures as symbols of the dualities within myself and in magick. I then focused on opening up to the currents of the two within me and in the external energy source. For me, that includes Hekate. Seeing dark and light in this way helped me to find balance within myself, more importantly, I could see that the arc of my own life and that of the universe is long and that the balance of all things plays out over long periods of time. 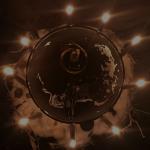 January 15, 2018
Deeper into the Deipnon: Honoring Hekate on the Dark Moon
Next Post 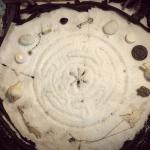 Life Is Good – A Pagan...
John Beckett
Related posts from Keeping Her Keys 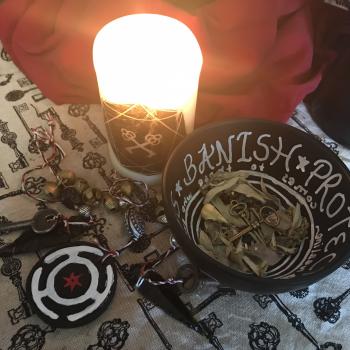 Pagan
Leaning Into Hekate's Crossroads During COVID-19
Keeping Her Keys