President Trump the deal maker is worried, and he should be. Two federal judges ruled against him this week, requiring that banks, other financial institutions, and Trump’s accounting firm must furnish Congress with his tax returns and other financial information upon its request. Trump will appeal, but most experts say he will lose. Then U.S. District Court Judge Amit Mehta ruled that Trump’s argument of executive privilege against the Congressional subpoena to require his White House lawyer Don Mc Gahn to testify before Congress is invalid. Trump is in big trouble, and it looked like it yesterday. 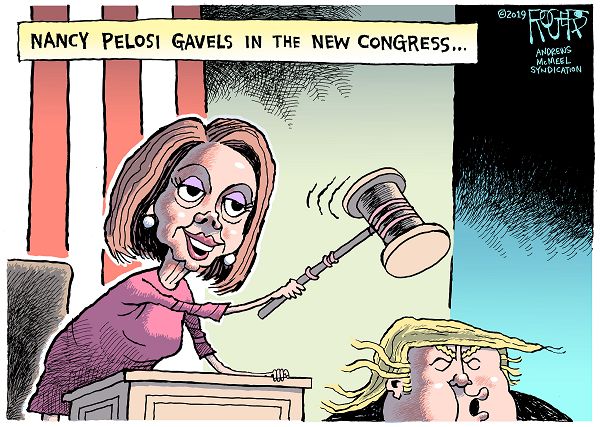 House Speaker Nancy Pelosi (D-CA) held a Democratic caucus meeting and then met with President Trump to discuss the nation’s infrastructure. But before doing so, she emerged from the caucus saying to the media that President Trump is conducting “a coverup.” That obviously irked Trump enormously. He took the podium at their meeting and said he would no longer work with Democrats unless they ended the several committee investigations of him in the House. That isn’t going to happen, and he knows it.

Then the president, who brags about being such a great dealmaker, quit and stormed out of the Oval Office into the Rose Garden. He then complained to the press that the affair was “a take-down attempt of the president of the United States.” He soon added quickly, “I don’t do coverups.” Ha! Some people who know this man say his whole life has been a coverup. Just ask David Pecker, that is, if he’ll tell fully about his long-time relationship with Donald Trump. Pecker and Cohen were Trump’s go-to coverup guys.

Later that day, Pelosi said to the press that she “prays of the president of the United States.” Nancy Pelosi is a Catholic Christian. I believe she was quite sincere in saying that. She also explained concerning Trump’s abrupt ending of the meeting, “For some reason, maybe it was a lack of confidence … he just took a pass.”

President Trump regularly blasts his political enemies by giving them original and derogatory nicknames. Crooked Hilary (Clinton), Pocahontas (Elizabeth Warren), and Sleep Joe (Biden) are the more prominent ones. But he has curiously refrained from doing so with Nancy Pelosi. It looks pretty obvious why that is. He’s afraid of her. He should be. She’s smarter than him, and she acts very adult whereas Trump so often acts like a child bully in the playground. Trump has met his match in Nancy Pelosi. He should nickname her “the Polite Iron Lady.”

May 25, 2019 Is Donald Trump a Psychopath?
Recent Comments
0 | Leave a Comment
"Trumpty Dumpty promised a Wall (paid for by Mexico)Trumpty Dumpty had a Great Fall (audited ..."
Steve Kellerman Trump: The Snake Oil Salesman
"When I heard they had shipped the ballots to MONTANA (!) I thought there goes ..."
47scooter Trump: The Snake Oil Salesman
"I don't think it's going to matter, sadly. Those still in Trump's camp are fact-immune, ..."
Illithid Pelosi Rightly Rejects Jordan for Committee ..."
"Speaker, Nancy Pelosi is a strong woman with six grown children and numerous grandchildren of ..."
Judgeforyourself37 Pelosi Rightly Rejects Jordan for Committee ..."
Browse Our Archives
get the latest from
Kermit Zarley Blog
Sign up for our newsletter
POPULAR AT PATHEOS Progressive Christian
1