The Middle East is the center of Islam. Founded by Mohammed in the seventh century, Islam originated in Medina and then Mecca in Saudi Arabia. When Mohammed died, in 632 AD, he had not designated a successor. So, his fellow Muslims debated about who should be the leader of their religion.

The majority of Muslims said Mohammed’s successor should be his close friend Abu Bakr. In fact, he then formed the first Islamic caliphate. His followers became known as Sunnis. This word originates from the Arabic word sunna, meaning “tradition.”

But a smaller group of Muslims insisted that Islamic leadership should be kept within Mohammed’s family. So, they said Mohammed’s successor should be Ali. He was Mohammed’s cousin and the husband of Mohammed’s only surviving child–his daughter Fatimah. These Muslims therefore became known as Shiites or Shias due to the Arabic expression Shiat Ali, meaning “the Party of Ali.”

Thus began the division in Islam between the sects of Sunni and Shiite/Shia which continues to this day. This division, which has been both religious and political. Oftentimes, Sunni and Shiite got along peacefully. But in the late twentieth century, their conflict amped up considerably.

Today, 85% of Muslims in the world are Sunni, and nearly 15% are Shiite. Ironically, most Muslims in the world live outside the Middle East. The largest Muslim population is in Indonesia. Thus, Islam had spread eastward to a great degree and somewhat into Northern Africa.

Iran is almost totally Shiite. Iraq, Syria, and Lebanon, which are located directly west of Iran, are mostly Shiite as well. Those four countries make up the entire northern portion of the Middle East, unless Afghanistan is considered in the Middle East (most authorities don’t). Afghanistan–where the U.S. is still conducting it longest war ever, which is against the anti-governmental Taliban, Muslim sect–is located adjacent to Iran on its east side.

Just about all of the southern states of the Middle East are strongly Shiite. Yemen, however, is located on the west side of Saudi Arabia, about 55% Sunni and 45% Shiite.

So, the Middle East is almost entirely Muslim; yet it is divided between two religious sects of Islam, and these sects are located in the north and south, respectively.

U.S. President Donald Trump and the leadership of Saudi Arabia, especially its Crown Prince Mohammad bin Salman, have taken a liking to each other. It is partly because Trump focuses on helping the U.S. economically. Thus, he likens to Saudi Arabia because all of its oil reserves and wealth.

And when Trump campaigned for the U.S. presidency in 2016, he declared that the agreement with Iran not to develop nuclear weapons was financially detrimental to the U.S. He therefore said that if he became president, he would withdraw the U.S. from this agreement. Over a year ago, he made that announcement. But it cannot happen until 2021 according to a U.S. promise in the agreement. Furthermore, Trump has become extremely anti-Iran, partly because of Saudi Arabia but also because of Israel.

Iran became an Islamic theocracy, the only one in the Middle East, in 1979. Since then, Israel and Iran have had a long-running war of words in which Iran has threatened to destroy Israel. But the same conflict has been increasing between Iran and Saudi Arabia, with Iran being almost totally Shiite and Saudi Arabia almost totally Sunni. 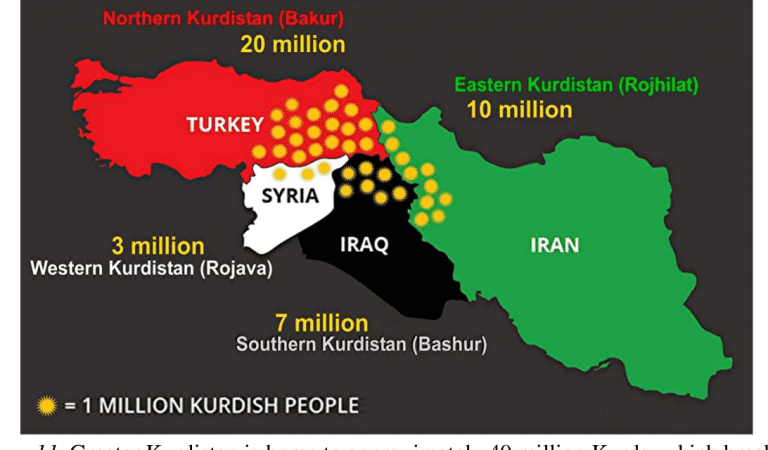 Early this week, President Trump announced that he was withdrawing U.S. troops from northern Syria. They had been deployed there to aid especially the Kurds who had helped the U.S. and Europe in fighting off ISIS–the radical and extremely violent Muslim group that has been trying to forcibly reestablish the old Islamic caliphate in the Middle East. Trump had phoned Turkey’s Muslim President Erdogen about this situation with the Kurds and our troops in northern Syria. (Syria has had an ongoing civil war since 2011.) As soon as Trump got off the phone, without considering his advisors, he did what Erdogen wanted and announced this withdrawal, which has now happened. And Erdogen already has sent Turkish troops into Syria to begin an ethnic cleansing of Kurds.

Turkey deems Kurds as “terrorists.” This is because Kurds have always wanted to have their own state, referred to as Kurdistan, which they have never had in modern times. (Kurds believe they should have gotten their own state when the Allied Powers divided up the Middle East, which had been the Ottoman Empire, following WWI into what were called “mandates,” most of which later became nations.) Kurds live today in four corners of four countries: northeastern Syria, southwestern Turkey, northern Iraq, and far eastern Iran.

This decision by Trump is very much to the liking of Russia’s President Vladimir Putin, to whom Trump has a strange liking, and Iran. It will enable Russia to have a stronger influence in the Middle East and open shipping lanes from Russia to the Mediterranean Sea. And this U.S. withdrawal will allow Iran to further develop its close association with Iraq, Syria, and Lebanon. This latter seems to contradict Trump’s constant criticism of this Iraqi influence, which he calls terrorism.

But this decision by Trump, to remove U.S. troops from Syria in providing protection for Kurds, has greatly angered many congressional members of President Trump’s political party–the Republican Party. It is strange that Trump would do this when he is now under investigation for impeachment in the House of Representatives by the Democrats. If ever he needs Republican support, it is now since evidence appears almost daily that Trump has committed acts that may be “crimes and misdemeanors,” for which the Constitution says he may be impeached.

Furthermore, yesterday, President Trump announced that he was sending U.S. military troops into Saudi Arabia to help protect it against further incursions from Iran and its surrogates that occurred recently. That is, Saudi Arabia is engulfed in a ward with neighboring Yemen, and weeks ago drones attacked and destroyed significant oil refineries in Saudi Arabia, temporarily knocking out half of its production.

Thus, U.S. President Donald Trump may have done more this week to further divide the Middle East politically than anything that has occurred there in modern times.

October 10, 2019
NBA Wake Up! This Is America, Land of the Free, Not Communism
Next Post

October 13, 2019 Should There Be No Impeaching of the President?
Recent Comments
0 | Leave a Comment
"¡Hay que ser en pendejo para escribir tanta mierda!"
Luis A Pérez The South’s Confederacy Has a New ..."
"He is."
Danusha Diane Goska Donald Trump’s Uncle John
"P.S. Liking your own posts is pathetic"
Mr. Annoying The Bible Says Trump Is a ..."
"Not ready to confront the GOP's selling out, are you?That's okay, we all knew your ..."
Mr. Annoying Evangelicals’ Trump Strategy Has Backfired
Browse Our Archives
Follow Us!