Today, U.S. Senator Lindsey Graham called on President Donald Trump to demand of China’s President Jinping Xi to “crack down” on their “wet markets” where exotic, wild animals, both live and their carcasses, are sold. It reportedly is an $85 billion annual industry. They are used for both human consumption and in traditional Chinese Medicine. This coronavirus, called COVID-19, that the world is now suffering as a pandemic, is believed to have originated from bats sold at the Huanan Seafood Wholesale Market in Wuhan, China. 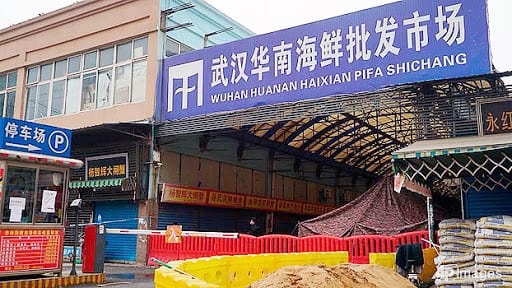 One of the main reasons bats are used in Chinese Medicine is that it is thought they can heal human, sexual diseases. I maintain that there may be a connection between such viral pandemics caused by pathogens “jumping” from such animals to humans and the Mosaic food laws in the Bible, which forbids eating bats deemed “unclean.”

Linsey Graham also said today, “Sixteen percent of all deaths in the world are [from] infectious diseases, and about 60% of them come from animal to human transmission. People eat cats and dogs throughout the world as part of their diet. We need to change that. It’s the 21st century.”

Graham also said, “What I would tell President Trump is to call President Xi and say, ‘Listen, you just reopened the wet market in Wuhan where we believe this all cam from. Crack down on exotic animals in these wet markets where they contaminate the food supply and human beings. Bats carry [contagions]; stop eating bats.”

The Jews eating kosher is based upon dietary laws in Leviticus 11 and Deuteronomy 14 in their Bible (Old Testament) and the Talmud. These food laws in the Bible were given by God to Moses, who then gave them to his Hebrew people. Animals are categorized into “clean” and “unclean.” Only clean animals are suitable for human consumption, and unclean animals are not. The sole rule for determining this for land animals is that clean animals must have cloven hoofs and chew the cud (Lev 11.3; Deut 14.6), which includes cows, sheep, goats, deer, etc., all which are named as clean in these two biblical texts. “Bats” are included among those named animals that are “unclean” (Lev 11.19; Deut 14.18).

Not only are unclean animals forbidden for human consumption, it is forbidden to touch them or their dead carcasses. If a Hebrew/Jew does so, or his/her clothing does so, that person must depart from the community, wash his/her body thoroughly, and not return to community until evening, meaning some hours later (Lev 11.24-25). This, to me, suggests there is something about the unclean animals themselves that makes them “unclean.” What is it? I think it is the fact, which medical research has proved, that these animals such as bats carry lots of pathogens that can infect people.

But way back there in antiquity, Moses and the Hebrews surely did not understand this. And the Bible gives no explanation about why God distinguishes these two categories of clean and unclean animals. It only says that the Israelites must keep these dietary laws because they are a “holy” people, meaning set apart unto Yahweh their God. He explains, “it is you the LORD [=Yahweh] has chosen out of all the peoples on earth to be his people, his treasured possession” (Deut 14.2).

Even before God gave these dietary laws to the Israelites, and right after they crossed the Red (Reed?) Sea to escape Egyptian Pharaoh’s armies, God said to them, “I will not bring upon you any of the diseases that I brought upon the Egyptians; for I am the LORD who heals you” (Exodus 15.26). Perhaps one of the ways God prevented diseases coming upon the Israelites was by means of the dietary laws he later gave them.

March 29, 2020
Trump Has Dropped the Ball about this Coronavirus
Next Post

April 4, 2020 CORVID-19: Part 5: Did Trump's Tariff War Cause China to Reject U.S. Help for COVID-19?
Recent Comments
0 | Leave a Comment
"I'm no expert about Muhammed. I have written several posts on my blog about Islamic ..."
kzarley The Billionaires Battle for Space
"Hi Mr. Zarley, I’m Frank and I’m a huge fan. I know this is off ..."
Frank The Billionaires Battle for Space
"Does it hurt?Having your heart so full of hate and bitterness toward those with whom ..."
ArchKnight Some Republican Lawmakers Are Reminding Me ..."
"I would disagree. The governments in Seattle and Portland and Minneapolis were fairly elected. BLM ..."
ArchKnight Some Republican Lawmakers Are Reminding Me ..."
Browse Our Archives
get the latest from
Kermit Zarley Blog
Sign up for our newsletter
POPULAR AT PATHEOS Progressive Christian
1