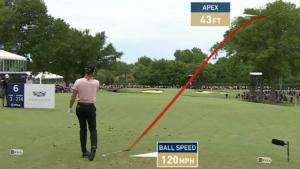 Justin Thomas won the PGA Championship yesterday–one of the four major tournaments in world professional golf–and he did it by coming from seven strokes behind starting that last round. But the really crazy thing about it was that he COLD SHANKED his ball on the 218-yard, par-three, sixth hole with his mid-iron, and the ball, of course, was TEED UP! It teed him off so badly that he released the club near the end of his follow-through, with the club slamming on the ground just as his ball was in mid-flight, heading right into the trees and traveling only 108 yards. He later said of that shot and his score on that hole, “Best bogey I’ve ever made in my life.”

Thomas had no idea at that point that he had a chance to win that tournament. Mito Pereira had been holding a three-stroke lead on the field during much of the round. But Thomas made four birdies his last ten holes to get into the playoff and beat Will Zalantoris.

As for Pereira, with a one-stroke lead as he hit his drive on the last, 18th hole, the dramatically chopped-off finish looked like he must have shanked his ball, which you can’t do. (Irons have a hosel that can cause a shank, but metalwoods do not.) The result was that his ball ended up in the creek, and he finished that hole with a double-bogey to lose by one stroke. He could have said of it, “Worst double bogey I’ve ever made in my life.” He did say that he wished he could take that shot over again, like a mulligan.

The last time I shanked a ball was in college! No joke. For most good golfers, shanking a ball is something they never forget. Some golfers even have nightmares about shanking their golf ball.

My most common nightmare about golf is not about shanking but that I’m late to my tee time and get assessed a two-stroke penalty. Worse than that is my common nightmare of driving my car to the golf course at a PGA Tour tournament, getting lost, and arriving at the course to MISS my tee time and be disqualified. (When you’re late to the tee, you are assessed a two-stroke penalty; but if you’re more than five minutes late, you’re disqualified. However, they may have changed that rule.) You’d think that to have such nightmares, I must have had this experience in real life. Not so.

Rocky Thompson, my close friend on the PGA Tour, used to occasionally have a repeated nightmare in which he also got lost while driving his car to make his tee time. He stopped at a gas station to ask how to get to the golf course, and he was told, “You can’t get there from here.”

One of the questions golfers often ask a PGA Tour pro like me is, “Did you ever play golf on the Tour with any of the great players like Arnold Palmer or Jack Nicklaus?” I have to explain to them that if you had a long career on the PGA Tour as I did, you played with all of the great players many times.

But IMO, it is a lot easier to sky a driver with those shallow, persimmon-wood, club heads we used to play with than to totally shank an iron, especially one teed up. I really don’t think I ever saw a pro on the Tour shank an iron shot with the ball teed up. I wonder what Jack would have said about Justin’s shank.

But I don’t think Justin Thomas will ever have nightmares about that shank since he won the tournament. Heh, it might even be one of his best dreams.

May 22, 2022
Justin Thomas Wins His Second PGA Championship
Next Post

May 24, 2022 Sergiy Kyslytsya Has the Best Line This Year
Recent Comments
0 | Leave a Comment
"I don't subscribe to historical interpretations like you are doing. History is full of failed ..."
kzarley Is Donald Trump “Unfit for this ..."
"One of the heads of the first beast had an apparently mortal wound. I always ..."
Hayal Meir Talmid Is Donald Trump “Unfit for this ..."
"The Neo-Nazi (Harlot of Babylon) Timeline:• First they ignored "All Men are Created Equal".• Then ..."
The Zephyr 🇺🇲 <---> 🇺🇦 Boebert Says She’s “tired of this ..."
"TЯA☭tor-TЯ卐m₽ committed the most serious crime anyone can commit against his or her own country.He ..."
The Zephyr 🇺🇲 <---> 🇺🇦 Should the Justice Department Prosecute Trump?
Browse Our Archives
Related posts from Kermit Zarley Blog