First Sunday After Epiphany, Year A

A couple of days ago I announced that I am beginning a year-long journey through the Revised Common Lectionary. You can click here for an in-depth exploration of what the RCL is, but in short, that is what churchy types call the three-year cycle (A, B and C) of scripture that many pastors in churches of multiple denominations follow as they prepare their sermons each week. We entered Year A at the beginning of Advent. I have been preparing for this project since I have entered seminary over a decade ago (and maybe since I received my first sweet little bible from my paw paw over 40 years ago) and yet I am a tad terrified by the prospect of the work involved and what might happen on the journey.

And so it begins.

I was asked yesterday if I plan to focus solely on the Gospel reading each week or will I be addressing all four assigned texts. Yes.

Okay, I suppose it depends on the nature of the texts, but it is my intent to explore all four texts, especially because my gut instinct is to avoid the troubling texts and prescribed readings that seem to make no damn sense when reading the Gospel message. Also, I worry about the inclination to read Hebrew scripture through the lens of the Gospel because they stand on their own AND they are part of the entire narrative. Sigh, this is gonna get messy before it starts to look like anything appetizing.

I’m filled with more questions than answers, which is a good thing since I believe questions are holy while certitude is specious at best. I think the best way to get started on this journey is to invite you into my process and see what happens.

As I began work on the texts for Sunday, January 8, I felt a little like Buddy the Elf having just  passed through the seven levels of the Candy Cane forest, through the sea of swirly twirly gum drops, and then walked smack dab into the beginning of Jesus’ ministry. The Christmas decorations are not even put away, Epiphany is coming to a close and on Sunday we’ll have gone from child Jesus being showered with gifts (and narrowly escaping the slaughter of innocents) to Jesus being submerged in the Jordan by the bug-eating zealot, John.

Before reading the assigned texts, I quickly jotted down the ideas and questions about the Gospel lesson that popped into my head when I thought about baptism.

John the Baptist, the Essenes

Sacraments – The good in them (participating in holy rites that connect us to God and one another), and the misuse of them (creating rituals that codify who’s in and who’s out )

“baptism” narratives in other religions

And finally, if baptism is about cleansing, renewal and rebirth, as many of us have been taught, of what was Jesus being cleansed?

After this initial brainstorming, I slowed down and read each text and wrote brief summaries of just the texts as they were assigned then I started digging in.

The reading from Isiah is a prophecy about a servant sent by God, endowed with God’s spirit and commissioned to “bring forth justice to the nations.” The servant leader will be humble, not attention seeking. The servant will be gentle and protect the vulnerable, not brutal. The servant will not rest until justice is realized. Justice here is spelled out as giving sight to the blind and releasing the prisoner.

Where I get excited about this text is the nature of God’s justice according to the prophet. When Jesus states the nature of his ministry, it is Isaiah’s words he echoes “The Spirit of the Lord is on me, because he has anointed me to proclaim good news to the poor. He has sent me to proclaim freedom for the prisoners and recovery of sight for the blind, to set the oppressed free.” (Luke 4:18)

This is a psalm of praise recognizing the power of God. God’s power is depicted in a poetic set of theophanies witnessed in the natural world – waters, whirlwinds, fire and earthquakes.

This imagery is a powerful companion to the the experience of God’s presence at Jesus’ baptism,

Since this is often read on Baptism of Our Lord Sunday as a confession of faith text, and because of where ended up with the baptism arrive,  it is important to send a little extra time exploring what sort of faith Peter is confessing. Hang in there with me, okay?

Read out of context, this text can be immediately frustrating because Peter first says God shows no partiality, except that God is partial to those who fear God and do what is right to God.

He goes on to boast, um say, that Jesus appeared after his death and resurrection, not to everyone, but just to those who were hanging out with him before he was executed. Partial  not partial – what gives, Peter? Seemingly self negating, we have to zoom out and figure out in what context Peter is saying these things.

So let’s back up and see where Peter is and what he’s up to right before he says this.

Chapter 10 of Acts is a really big deal as we grapple with the universality of God’s grace. In a nutshell, up until this point, the followers of The Way were Jewish. Gentiles were considered “unclean”. Chapter 10 opens when a faithful Gentile named Cornelius has a vision of an angel telling him to send for the disciple Peter. Meanwhile and elsewhere, Peter had a whack-a-doo dream about a sheet lowering from the sky full of animals of all sorts and a voice commanding him to eat “unclean food.” When he awoke he was befuddled as hell. Not too long after, he winds up going to Cornelius’ home where is he met by the whole famn damily of Gentiles when Peter suddenly realizes that the dream he had was a vision from God telling him that there is no such thing as unclean food and realizes that really means that there is no such thing as unclean humans. None. Cornelius’ crew is filled with the Holy Spirit, speaking in tongues and by the end of the chapter they are all splashing around in the baptismal waters.

Now where was I, oh, partiality…It is in the middle of this chapter where Peter proclaims God shows no partiality and that God’s blessings are not bound by borders or man made purity laws but to those who do right in God’s eyes.

So what is right in God’s eyes? Well according to the words of the prophets and the deeds of Jesus, I’m gonna go out on a limb and say – justice for the least of these.

Wow, y’all. There’s A LOT going on here. Really, a whole Sunday could be devoted to this reading, but reading it alongside Jesus’ baptism has been more powerful than I have previously experienced. So let’s head on down to the river with Jesus and John.

The baptism scene occurs in Matthew in the chapter right after the description of the holy family fleeing the massacre of innocents to live as refugees in Egypt and eventually returning to settle in Nazareth. Context is everything.

So Jesus comes to camel-hair-wearing, locust eating John the baptizer, who had just rebuked the Pharisees, calling them a brood of vipers. In a very brief, but pointed scene, John says he is the one who should be baptized by Jesus, not the other way around. Jesus insists that it is the proper order of things that John should baptize him. Upon emerging from the submersion, the heavens are open and a dove descends (much like at the receding of The Flood) and a voice from heaven pronounces “This is my Son, the Beloved, with whom I am well pleased.” (there’s that theophany)

Baptism is understood in many ways; a ritual cleansing, a sacred rite that signals one’s inclusion in a community, a transformation (metanoia) from one way of life (sin) to another way of life (righteousness). An act that reconciles us with God. It is a move from separation to unity.

So with just these ideas in hand, there are lots of great questions to ask around the baptism of Jesus – and the more questions we ask, the better.

Did Jesus need to be cleansed of sin?

Why did Jesus submit to John?

Into what community was Jesus entering?

With what was Jesus unified.

First let’s look at sin and do so through a very specific lens. Drawing again on the philosopher, theologian and preacher Paul Tillich…

“Do we realize that sin does not mean an immoral act, that “sin” should never be used in the plural, and that not our sins, but rather our sin is the great, all-pervading problem of our life? Do we still know that it is arrogant and erroneous to divide men by calling some “sinners” and others “righteous”? For by way of such a division, we can usually discover that we ourselves do not quite belong to the “sinner,” since we have avoided heavy sins, have made some progress in the control of this or that sin, and have been even even humble enough not to call ourselves righteous…

…this kind of thinking and feeling about sin is far removed from what the great religious tradition, both within and outside the Bible, has meant when it speaks of sin…

So, if sin is a state of separation, and prior to the Incarnation of Jesus, God was outside of creation, separate from it and if baptism signals a unification, then when Jesus was baptized, the Spirit of God was, how did the prophet say it? – “put upon him” and creation was fully reconciled with God. God is unified with God’s creation in a new way in Jesus. God and creation are no longer separate. Holiness of Jesus = wholeness of creator with creation.

And when we emerge from the waters of baptism, we are unified with all parts of our created self; unified with the human community and unified with God.
We are no longer a human race searching for ourselves while cowering before a God outside of creation, nor must we cower before the powers and principalities of this world (religious or political), we are beautiful children of God, unified with God and all of creation, with whom God is pleased. 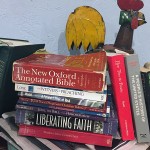 January 10, 2017 This I Believe
Browse Our Archives
get the latest from
Kimberly Knight
Sign up for our newsletter
POPULAR AT PATHEOS Progressive Christian
1 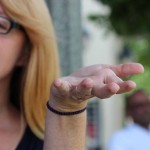 What Is Sin?
Sin is such an emotionally laden term. It is often...
view all Progressive Christian blogs
Copyright 2008-2021, Patheos. All rights reserved.