Done being Gay and Christian in America

Some of y’all may know that in July I will be moving with my new wife to the Netherlands. The inspiration for this leap across the pond bloomed one traumatic night in November when the changing of the guard ushered in the new regime of madness under which we now find ourselves.

See, Betsy has lived and worked abroad before, nearly a decade in Singapore and Budapest, and we had been planning to eventually move to Europe together, so on that devastating night, she began reaching out to former colleagues to see if there were any faculty openings for which she’d be qualified to apply. Apparently, the answer was yes. So, after nearly four months of interviews at a school in The Hague (her last interview happened to be on Inauguration Day) and nearly just as many sleep deprived nights waiting for an answer, the universe handed us a big fat YES! We are beyond excited to be making this leap together!

Although our own country has made immense progress (thanks to the tireless work of activists of all stripes and a previous administration that led with hope rather than fear) the US seems to be in serious retrograde where haters are celebrating their ignorance in unprecedented style! So, in less than 90 days we will be living and working in a culture not dominated by sexually stunted, willfully ignorant, fear-mongering religion.

I can hardly wrap my head around what it’s going to be like to no longer have to convince the government that we deserve the same portion of legal rights and protections as any other person. We’re moving to the first country to legalize same-sex marriage back in 2001. We won’t have to walk through our days deciding where it is okay to just be authentically and fully ourselves without fear of reprisal, professional termination or even violence. In the span of a few months and a 6-hour flight, we will go from abominations unworthy of basic human dignity to just a middle age married couple just trying to love one another, our friends & family and our work as best as we know how.

And as I’ve been peeking over the horizon to see the twinkling dawn of this new reality, I realize how far from American religiosity I have already come and how wonderful it will be to no longer beg for crumbs from the table of the American protestant church.

So, after a lot of thinkin’, praying’ and talking thing over with my wife (I do so like writing that), I have come to the conclusion that’s it’s time for a change. After this post, and maybe a flurry of Flashback Fridays, my blog will begin the transition from conversations about being gay and Christian in America to musings about being an expat in Holland trying her dead level best not to start an international incident while ordering a cup of coffee and a tompouce.

See, I’ve been saying (with varying degrees of grace and fury) the same damn thing in the 263 posts I have published over the past few years. So before I begin the transition of my blog from one sort of rambling hot mess to another, let me remind you of a few critical things. I’ve even created this here handy-dandy PDF that you can print out and hang on the fridge or use to line the bird cage.

You are loved by God.

You are created to experience love.

Living into how you were created to experience love is not sin.

The bible is not God.

The church is not God.

You do not have to be part of ANY community where you are asked to live a lie.

There are some radically inclusive people of faith. If you don’t know any, PM me on Facebook.

There are some radically inclusive Christian congregations. If you don’t know any, PM me on Facebook.

Your sacred worth and civil rights are non-negotiable.

There is no such thing as A homosexual lifestyle.

It is okay to love Jesus and cuss a little.

So, that’s about it for now, friends. Be on the lookout for the new blog called “WTH!? Welcome to Holland…” where I’ll share my many adventures in trying not to be too obnoxious while looking for thin places in new spaces abroad. 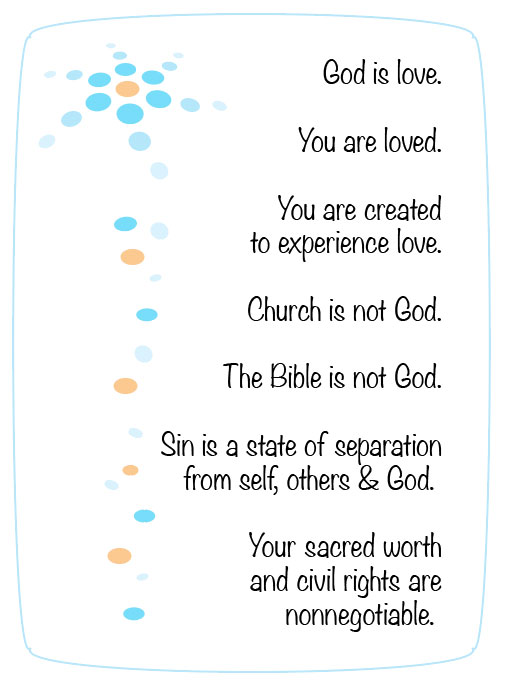 April 24, 2017 I was wrong, Trump is the right president for America.
Browse Our Archives
Related posts from Kimberly Knight

Communion is for Everyone
Or else it's for no one. Communion is for everyone. The presence...
view all Progressive Christian blogs
Copyright 2008-2021, Patheos. All rights reserved.