My Heart Broke Into a Million Pieces When I Heard Their Stories, Says Dr. KP Yohannan Metropolitan

Last week, I had the privilege to visit the girls’ home and boys’ home that Gospel for Asia supports in Delhi, India. The children who live here, most of whom are orphans, were brought in after being rescued from living on the street. They are cared for physically as well as emotionally and spiritually. Whenever possible, the social workers try to find their parents and reunite them. For those who are orphans, the children’s home becomes their permanent home and family.

I was so grateful to see the bright eyes and happy faces of these children, singing songs and excited to have guests in their home. But as I heard about some of the things these precious children have suffered through, I was deeply saddened at their plight, and my heart just broke into a million pieces. They were such unbelievable circumstances for anyone to walk through; it was hard to imagine these little ones having to go through so much, some at just two or three years old.

There was one story in particular of a little girl that struck me so hard. She’s a sweet, cute little girl who’s doing so well there in the home. At three years old, this precious child was invited by a man she had met to have a piece of chocolate at his house. She didn’t think twice about it. As she had no father, and her mother was an alcoholic, this little girl was practically an orphan. She lived on the streets under a railway station in Delhi. Stricken by poverty, and with no one to care for her, she might have seen a sort of father in that man. But that wasn’t the case at all.

She was brutally raped, abandoned and left bleeding. Some passerby who noticed her crying notified the police. Through the government Child Welfare Committee (CWC), she ended up at the beautiful home we have for abandoned children like her. Just recently, we found out her mother had died on the streets, so it’s hard to know what would have happened to her if she hadn’t been brought to the girls’ home.

And hers is just one story: there are many more with sad stories among the 50 or so children in our girls’ home. As I spent the day visiting the girls’ and boys’ homes, I was reminded about the 100,000 or more runaway children who are still on the streets of Delhi alone. And then there are the hundreds of thousands of young girls who are sold into prostitution from Nepal to India, the vast majority of these kids ending up infected with AIDS. In South Sudan, according to a recent article from Reuters , “more than 1.1 million children under five . . . are forecast to be malnourished in 2018 including nearly 300,000 ‘at a heightened risk of death.’” And according to UNICEF, there are nearly 2.5 million children among Syria’s refugees.

November 20, is Universal Children’s Day. It’s been 58 years since the UN General Assembly adopted the Declaration of the Rights of the Child—rights which included education, nutrition, medical care, relief and protection against neglect, cruelty and trafficking. And even with all that’s been done since then, there is obviously so much yet to do in order to provide even the most basic human rights to each child.

When we hear of the needs and suffering of children around the world, we must take action in whatever way God shows us. It is in praying and going, giving and sharing in the pain, that we live out the Christ of the Gospels. Theology without a broken heart, tears and action has no meaning. In the Gospel of St. Matthew chapter nine, we read about Jesus’ compassion on the suffering multitudes. Today, we have the opportunity to be in this world as Jesus would be. When I think about the suffering and plight of so many in the world around us, I realize what an opportunity God has given us to be an answer in this generation.

I might not be able to make a difference in the lives of all the precious children who are struggling without their basic needs, but I know I have made a difference for the little girl I saw last week. Now she stays in a good home, eats hygienic food, attends a good school and plays in a safe environment. Looking at her, you wouldn’t even know all that she has gone through—she looks like any other young girl, laughing and smiling. And gratefully, this is also the story for all of her friends in the girls’ home.

Then I think of Gospel for Asia’s Bridge of Hope Program, which is providing hope and practical help to tens of thousands of children suffering in poverty and hopelessness. By God’s grace, the children in this program are getting healthy food daily and regular medical checkups. They receive help with their education so they can one day get a good job and afford sufficient food, decent clothing, medical supplies and other necessities of life for themselves and for their families. It is one of my greatest joys to know that today, more than 82,000 precious children are enrolled in the program and are being loved and cared for.

Maybe one of these days, the little ones in the children’s homes and in Bridge of Hope will grow up to become doctors, engineers or teachers. Wherever their lives may lead, my prayer is that they will grow up knowing God’s love for them and become strong, upstanding citizens, who will be able to serve and lead in their communities.

As we look at the needs in the world around us, let us respond with a heart of compassion. We are to let the life of the Living God flow through us, being Him for the sake of a world in need, especially for these helpless children.

For one way to help bring hope to children in need, learn more about GFA’s Bridge of Hope Program. 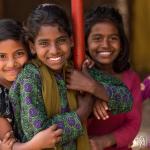 November 19, 2017
I Was Glad When PM Narendra Modi Began His Swachh Bharat Campaign
Next Post 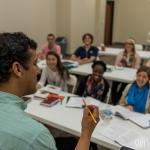 November 22, 2017 Something Incredible Happens in Our Hearts When We Stop to Say, “Lord, I Thank You.”
Recent Comments
5 Comments | Leave a Comment
Browse Our Archives
get the latest from
Living in the Light of Eternity
Sign up for our newsletter
POPULAR AT PATHEOS Evangelical
1

7 Good Bible Verses For Our...
Christian Crier
Related posts from Living in the Light of Eternity