Love and Righteousness: The Lectionary for the Fourteenth Sunday after Pentecost

Love and Righteousness: The Lectionary for the Fourteenth Sunday after Pentecost August 23, 2015 Eric Smith

What It’s About: These verses are standard Song of Solomon: the lover and the beloved exchanging compliments and articulating longings. And it’s pretty compelling; while some of the imagery in this book can be hard to translate into the 21st century (hi there, flocks of goats descending Mt. Gilead), a lot of us have known the sensation of wanting your beloved to come away with you into the fields.

What It’s Really About: Origen of Alexandria was one of the first, if not the first, to suggest that the Song of Solomon (or the Song of Songs) is really about Christ’s love for the church. In this reading, these verses and the others in the book are not exchanges between two people who love each other, but they are rather allegorical speech for the way Christ loves the church. This was a handy way of explaining away what appears to be a book of erotic poetry in the midst of Hebrew scripture, but it also serves to lay the foundation for a theology of the church, which is never really full articulated in the canon.

What It’s Not About: In that reading, then, this is not a book about desire, longing, sex, romantic love, or any such thing. In that way of understanding it, Song of Solomon is stripped of its human elements, and moved to the divine realm.

I think that’s a big mistake. I think we have to read this as what it is: the beautiful, honest, sexually-charged, and sometimes explicit story of two lovers longing for each other. It has always been a minor embarrassment that this is in the canon of scripture, but think about it. Wouldn’t it be an embarrassment if this weren’t in the canon of scripture? Isn’t there something amazing and edifying about our most sacred texts acknowledging and celebrating such a human condition?

Maybe You Should Think About: Maybe think about preaching this one. I am preaching on this text, and while it’s going to be challenging (it’s also an “intergenerational Sunday,” when we’re supposed to gear sermons toward people of all ages), I think it’s worthwhile to spend time, from the pulpit, talking about how central love and sexuality are to being human, and how amazing it is that the bible celebrates those things.

What It’s About: There is so much in here. These are some densely-packed verses. Gift-giving, personal comportment, and the kind of roll-up-your-sleeves talk that led Martin Luther to call James “an epistle of straw” are all are in evidence in these eleven verses. This is a potent list of exhortations.

What It’s Really About: The author seems to be addressing a series of concerns or questions–or perhaps this is simply the standard moral exhortation that he (or she) gave–something like a stump speech. It’s hard to see how some of the individual lines are connected to each other, but then when you step back, the whole is cohesive in a way that you don’t expect. The author here is arguing for something like what you see in the prophets: less talk, more action.

I’m reminded especially of Amos 5, where the prophet rails against empty religion, and advocates a return to authentic religion, which includes justice and righteousness in full measure.

What It’s Not About: This text really shouldn’t stand in for the Protestant Reformation, but somehow it often does. Luther famously held James in low regard, for its supposed works righteousness themes, and other Protestants have long neglected it. But we should remember that that’s not James’ agenda. It’s one that we’ve layered onto the text. James is speaking out of and into a first or second century context, well before Christians had gotten around to dividing up theology around the issue of faith and works. James, I suspect, would have been confused by Luther’s critiques. Of course works should follow from faith. And of course faith should precede works. It’s only in light of later conflicts that it makes sense to question that.

Maybe You Should Think About: Whatever issue is going on in your congregation right now, it’s a safe bet that these eleven verses say something about it. Spend some time with this one; this is a densely-packed text.

What It’s About: This is a conversation held between two rival groups of Jews, about Jewish law. On one side you have Jesus and his followers. On the other side you have the “scribes and Pharisees,” two groups that really stand in for “people who take the law really seriously.” The scribes and Pharisees were those who insisted in full attention to living a righteous life. So when they saw Jesus and his followers taking shortcuts, they asked, and I believe honestly, “hey, what interpretation of the law allows you to skip these steps?”

I think this is a lot like some of the debates that go on in Christianity today. For instance, I am a Christian Church (Disciples of Christ) minister who works in a United Church of Christ congregation and teaches at a United Methodist seminary. That first tradition, the DOC, allows anyone to preside at communion. The UCC and the UMC, however, have stricter rules about that, and usually the person presiding needs to be an ordained minister.

That’s the kind of conflict we see here. Nobody is advocating for dumping the Jewish law, and nobody is being hopelessly nitpicky. Instead, we see two rival interpretations of law and tradition, side by side.

Another way to think about it is this. Why does Jesus always seem to be in conflict with the Pharisees? The same reason liberal Christians are outraged by fundamentalist Christians, and vice versa. The same reason your parents’ politics make you angrier than your neighbors’. Because we tend to get into conflict with those with whom we have the most in common. Jesus and the Pharisees were very, very similar in history, tradition, outlook, and worldview. And that’s why their differences were so easily highlighted.

What It’s Really About: These kinds of debates accompany most religious and ritual systems, and Judaism was (and is) no different. At stake here is a simple question with a thousand smaller questions embedded in it: what is the right way to live? Debates about this started long before Jesus and lasted long after his death. So it’s best to view this as a conversation between two different factions of Jews, about Jewish law and Jewish practice.

What It’s Not About: Verses 14-15 and 21-23 are Jesus’ summation, and they give us a look at his take on the whole thing. Jesus wants to move the debate out of the realm of ritual and into the realm of ethics. It matters less, Jesus is saying, what you do with vessels, washing, your hands, etc. It matters a lot more how you live on a macro level. So Jesus, in a sense, wants to reject legalism but uphold the law. In the same way I, as a Disciples of Christ minister, might argue that it’s unimportant who presides at communion, Jesus wants to argue that big-picture ethics outweighs questions of ritual propriety. But, obviously, others disagreed.

Maybe You Should Think About: We have to learn to drop the Jesus vs. the Pharisees narrative. These folks were close cousins. They believed 99.9% of the same things. These are intramural disputes–the kind of debates that religious groups have all the time, about how to move forward and be faithful. I think we miss a lot of what’s important about their interactions when we see Jesus as some kind of superhero fighting backward religion, which is how Christianity has tended to see these conflicts. The Pharisees asked Jesus these questions because they wanted to know. They didn’t agree–but then, they didn’t have to, to be a part of the same family. 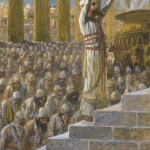 August 17, 2015
Powers and Principalities: The Lectionary for the Thirteenth Sunday after Pentecost
Next Post 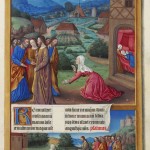 August 30, 2015 Faith, Works, and Being Human: The Lectionary for the Fifteenth Sunday after Pentecost
Recent Comments
0 | Leave a Comment
Browse Our Archives
get the latest from
Progressive Christian
Sign up for our newsletter
POPULAR AT PATHEOS Progressive Christian
1