Heaven and Earth: The Lectionary for the Fourth Sunday of Easter

What It’s About: The Acts of the Apostles got its name from the many deeds that it describes the apostles doing in its pages. This story is one of those; it is the tale of a miraculous healing/raising from the dead/miracle at the hands of Peter. The story of Tabitha–Dorcas in the Greek, we are told–has a familiar pattern for readers of Acts. The story is similar to that of Eutychus, in Acts 20, where Paul similarly raises a person thought to have been dead. The story of Eutychus is a bit more ambiguous than this one, but even here it is a little bit ambiguous. The language of “showed her to be alive” is not as forceful as “raised her from the dead,” so it leaves a bit of wiggle room with regard to whether she was dead all along, or just incapacitated somehow. Either way, it is experienced as a miracle by the people of Joppa.

What It’s Really About: I think that these stories are meant to demonstrate a continuity between Jesus’ ministry and the ministry of the apostles. It’s a way of showing that after Jesus’ ascension, people like Peter kept on doing the same kinds of things Jesus did in life. Nothing had changed, in other words, about the basic contours of the Jesus movement; only the personnel had changed. That’s a simplistic view, but I think that’s what the author of Acts wants us to come away with: that Peter was undertaking business as usual, and that Jesus’ power had passed to Peter and others.

What It’s Not About: The lack of explicit “and this is because Peter had raised her from the dead” language in these stories is a little confusing. Why not come right out and say it? Maybe it’s because it would have been understood to ancient readers, or maybe it was because they didn’t have our concern with biology and biological death. Either way, it seems like Luke, at least, didn’t share our criteria for miracles. We would want to know whether this was a miraculous recovery or something better: a raising from the dead. That’s because we understand that one is much more miraculous than the other. But that distinction seems to have been lost on Luke…and the people of Joppa.

Maybe You Should Think About: Healings and even raisings from the dead were common stunts by faith healers of the day. So why does Luke choose to tell the story in this way? Does Luke think of Jesus (and Peter) in the mode of traditional faith healers, or does he think of them some other way? Is this an artifact of Luke’s frequent borrowing from other sources?

What It’s About: This is a vision of the scene in heaven, where a mixture of earthly and heavenly beings stand in the presence of the Lamb, praising God. Prominent among these are white-clad persons, who draw the attention of one of the elders and our narrator/protagonist John, who asks about their identity. The answer to his question, given by one of the elders, tells us a lot about early Christian conceptions of martyrdom and the afterlife.

What It’s Really About: Revelation is the source of several important early Christian ideas about martyrdom. 6:9, for example, gave rise to the belief that martyred persons got to skip the grave and go straight to heaven, where they lived under the altar of heaven, while the rest of us moldered in graves, awaiting the general resurrection. And here in 7:9-17, we see a belief that martyrs (“those who have come through the great ordeal”) were in the presence of God, and that they would hunger and thirst no more. This sense that martyrs were rewarded would drive an intense period of martyrdom in the second, third, and early fourth centuries, when Christians accepted and even sought out martyrdom as a noble death that would please God.

What It’s Not About: It always surprises my students to learn that ancient Christians didn’t necessarily think that dead people went to heaven or hell. Early Christians thought that the dead were dead, and as such they dwelled in the grave (not unlike the Hebrew Sheol or the Greek Hades). There they awaited the resurrection, which many Christians believed was immanent. Today, at funerals, you will often hear claims that the deceased is “with God,” but early Christians would have believed no such thing. Only the martyrs got this do-not-pass-Go benefit, going on to their reward right away.

Maybe You Should Think About: Where do we get our notions of the afterlife? We most certainly don’t get them from the bible. The vision of hell comes from texts like Dante’s Inferno, and our heaven owes a lot to Renaissance depictions of angels. Notice that Revelation has a clear idea: a “new” Jerusalem is the model for what comes next. Not a cloud somewhere, but a newly made heaven and earth. This is quite at odds with the way we normally think about the afterlife, and it might worth doing a study of how we got to where we are in terms of understandings of what happens after death.

What It’s About: This is a little vignette of Jesus in conversation with “the Jews.” It has to do with what seems like genuine curiosity on the part of the Jews; they want to know if he is the messiah. Jesus’ answer is characteristically coy; he neither answers or refuses to answer, but claims that he has already answered. This satisfies no one, except maybe the followers who were with him, who must have felt very smug and accomplished in that moment.

What It’s Really About: “The Jews” are a common foil for the gospel of John, and elsewhere in the New Testament. There are complicated reasons for this; my favorite theory is Raymond Brown’s, which claims that the community of the beloved disciple later encountered hostile Jews, and wrote that conflict back into the story of Jesus. However it came into being, though, there are serious problems with translating the word in Greek as “Jews,” as Adele Reinhartz and others have recently shown. It can just as easily be translated “Judeans,” which actually might make more sense in the context of this dispute and others. No matter the identity of the conversation partners, though, it does seem like John is trying to show that there were some people who “got it” and others who didn’t.

What It’s Not About: This is just another example of Jesus’ steadfast refusal to completely own his identity. There were probably good reasons for this–he didn’t know it, wasn’t confident in it, didn’t want to get in trouble for it, etc–but it creates the sense that Jesus was hiding something.

Maybe You Should Think About: Jesus often came down on the secrecy side of things. Pray in private, don’t tell people who you are, go off alone, etc. It’s rarely suggested, though, that this virtuous side of Jesus’ personality might be a model for us. What if we conceived of a way of being Christian that was patterned on this side of Jesus? What if we publicly spoke about our Christianity only when we had to? I’m not advocating this, exactly, but it does seem like a humble posture toward the world that might greatly improve some of our dealings with non-Christian folks. 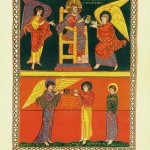 April 4, 2016
Scales and Sheep: The Lectionary for the Third Sunday of Easter
Next Post