Widows and Prophets: The Lectionary for the Third Sunday after Pentecost

Widows and Prophets: The Lectionary for the Third Sunday after Pentecost May 30, 2016 Eric Smith

What It’s About: This is the story of the widow of Zarephath–or, rather, it is two stories about the widow, and her interactions with Elijah the prophet. In the first story (8-16), God commands Elijah to go to the woman, and commands the woman to feed him, even though she and her son were already starving. The woman’s faithfulness in providing for her guest is rewarded, as the woman’s stores of food were miraculously replenished. The second story (17-24) is about the woman’s son, who falls ill, and her intervention with Elijah (who then intervenes with God) for the restoration of his health. Together they constitute a really interesting pair of stories that complicate and deepen notions of prophetic work, faithfulness, and the way God works in the world.

What It’s Really About: These two stories both center on questions of hospitality. In the first story, the woman is commanded to be hospitable, and she obliges, despite her poverty. In the second story, both she and Elijah appeal to notions of hospitality as a way of saying that the son’s illness is unjust. Elijah’s prayer sums it up: “O Lord my God, have you brought calamity even upon the widow with whom I am staying, by killing her son?” The woman’s faithfulness, she fears, has brought her sinfulness to the attention of God. It’s not really clear whether that’s actually the case; it almost feels like a case of oversight on God’s part, and not a case of retribution. Once Elijah brings the boy to God’s attention, the boy is restored to health. In both stories, there are powerful undercurrents of generosity and the unfairness of breaching that generosity.

What It’s Not About: This is not a typical prophetic story, and Elijah is not really a typical prophet. It’s interesting to think about this as a kind of enacted parable. If this had been told as a parable (“there once was a woman who lived with her son…”), we would have no trouble understanding the moral of the story. That it is presented as a narrative makes it a more difficult story (why does God have to be asked to heal the son of a faithful woman?) and higher-stakes. It puts the woman in the position of being the most just of the group; she is the one who sees and points out the injustice. Elijah is the next-most-just; he is able to see the injustice once it is shown to him. And God is the least just of all, or maybe God is just oblivious. But God does not come across as an attentively-caring deity in this story.

Maybe You Should Think About: Is this woman’s call (feed this prophet who will ask you for food) supposed to be generally applicable? Are we supposed to understand ourselves to be called in this way? Here is a limit of the narrative telling (as opposed to it being told as a parable); we don’t know whether we are similarly called. What would it look like if we were?

What It’s About: This passage follows up on a passage from last week, which was the opening part of Galatians. Here, Paul has launched into a defense of his apostleship and of the gospel he has preached. He has been accused of being a second-hand apostle; it seems that his opponents in Galatia (and others, like the later author of Acts) have depicted him as simply taking orders from the Jerusalem crowd. And those same opponents had been insisting that the gentile converts of Galatia needed to take on the marks of Jewish identity–circumcision and food laws–in order to be Christian. Paul, in this passage, is rejecting that, and defending himself. He does this with a narrative about his call (which he is clear is not dependent on anyone but God) and a short spiritual autobiography.

What It’s Really About: There were two narratives about Paul in the ancient world, and in the New Testament. One was that Paul was a kind of franchisee of the Jerusalem church, sent by them to the gentiles. The other–that comes from Paul himself–was that he was sent by God. This passage (and the verses before it in chapter 1) are Paul’s clearest articulation of how he sees himself as called by God. He is making as clear as he can that he has been commissioned by God and no one else; he denies even having much contact with the other apostles. It’s interesting to think about why he would have needed to say that. Were the Jerusalem Christians trying to control Paul by claiming authority over him? He was having none of it.

What It’s Not About: It’s not about rejecting Judaism. This is a complicated thing to describe in a short space, and for a fuller account I recommend my colleague Pam Eisenbaum’s book Paul Was Not A Christian. But briefly, Paul is referencing his “earlier life in Judaism,” in which he was a zealous and seemingly fairly normative Jew. This is, by the way, the only appearance of the word “Judaism” in the New Testament (verses 13 and 14). Paul’s earlier life in Judaism is contrasted to his current life, which is in service to the same God but with a very non-normative-Jewish message. Paul is very proud of his life in Judaism here and elsewhere (Romans 9:1-5, Romans 11:1, 2 Corinthians 11:22, Philippians 3:4-6), but he understands himself to have been called by God to be Jewish in a very particular way: to proclaim the opening of God’s family to the gentiles. For Paul there is no disruption between these identities, but a lot of continuity. Proclaiming Jesus is a function of Paul’s Jewish identity.

Maybe You Should Think About: What is at stake in the question of where Paul got his call and his information? If he was commissioned and sent by James and the rest of the Jerusalem crowd, then what is the upshot of that? And likewise, if he was commissioned and sent by God, what are the implications of that? Which account do you believe–the one Paul’s opponents in Galatia are claiming (and that’s supported in some ways by the author of Acts), or Paul himself?

What It’s About: This story has obvious parallels to the story of Elijah and the widow’s son in 1 Kings 17. In both cases a widow’s son is dead (or very nearly so, since 1 Kings is a little murky on this); in both cases the son is brought back to health and life. But the differences are also important. Jesus had no prior relationship with the widow or the son, as Elijah did. And Jesus healed the boy of his own volition; no one had to ask him to do it. Elijah was asked by the grieving mother. And Jesus does the healing himself, out of his own power. Elijah asked God to heal the child.

What It’s Really About: The differences in the stories serve to underscore the special-ness of Jesus. He is not a prophet. Elijah was a prophet and did a similar mighty deed, but ultimately that deed was done by God–and Elijah was not God. Jesus, though, heals the boy himself, without prayer to God. Jesus, then, plays the role of the prophet, but he also plays the role of God–he heals the boy and raises him to life. For someone standing by who knew the 1 Kings story, the implication was clear: Jesus was greater than Elijah, and possibly even divine.

What It’s Not About: It’s not about the boy or his mother. In contrast to 1 Kings, we don’t know much about this boy, his mother, or why he had died. Here the boy is an opportunity for Jesus to demonstrate his power–although the story is also about Jesus’ compassion.

Maybe You Should Think About: The story in Luke is much shorter than the story in 1 Kings, and yet it demonstrates much more power for its protagonist. Why is that? What are all the parts that are left out–the back story, the woman’s request to Elijah, Elijah’s request to God, the strange “stretched himself upon the child three times–doing to water down the power of Elijah, when compared to Jesus’ actions in Luke? 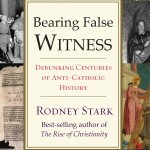 May 24, 2016
Debunking the Debunking: A Review of Rodney Stark's Bearing False Witness
Next Post 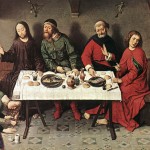