As Adam Kotsko says in his treatment of Irenaeus (The Politics of Redemption, 78), “the Incarnation of Christ simply taken in itself brings God into a much more intimate relationship with humanity, accustoming humanity to God and . . . also God to humanity.”

By the incarnation, we have become accustomed to a God who rages against our hypocrisy and self-importance; a God who has compassion on the weak and marginal; a God who takes the hit for humanity; a raucous God who eats and drinks with sinners; a God who feeds the hungry; a God who forgives.

We’d seen this before Jesus showed up. We’d seen prophets and humanitarians and acts of human kindness.We hadn’t been accustomed to this kind of God. 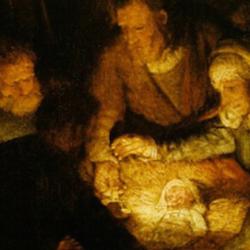 Evangelical
A Ruler in Israel
Leithart