When Pope Francis met with the Russian Patriarch Kirill met last Friday, it was an ecumenical moment of the highest order, the first meeting in history between a bishop of Rome and a Russian Patriarch. The meeting highlights two of the most important events of the 20th century – the ecumenical outreach of the Roman Catholic Church and the rise of Orthodoxy in the West.

Orthodoxy’s “invasion” of the West was partly an historical accident. When Constantinople fell to the Ottoman Empire in 1453, many Byzantine Christians fled to Italy. What was a disaster for Byzantium proved a boon to the West, as the influx of Greek-speaking refugees with their Greek books catalyzed the cultural resurgence we know as the Italian Renaissance.

The Soviet revolution had a similar impact, forcing Orthodox intellectuals from Russia into Western Europe and eventually to America. The Russian émigré community in Paris during the early and mid-twentieth century is a who’s who of modern Orthodoxy: Georges Florovsky, Vladimir Lossky, John Meyendorff, Sergei Bulgakov, Alexander Schmemann.

Over the past century, these and other Orthodox thinkers have had a massive impact on European and American theology. Every serious liturgical scholar today, Catholic or Protestant or Pentecostal, draws on the treasures of Orthodoxy. The ecclesiological and liturgical vision of Vatican II was molded by Catholic reformers who were students of the Orthodox tradition. The Trinitarian renewal in Western theology has partly been inspired by Orthodox Trinitarianism, and everyone wants to talk about deification these days.

Orthodoxy has also become more prominent on the ground. Overall, America’s Orthodox churches grew by 16% during the first decade of the twenty-first century. There are more than a million Orthodox Christians in the US, distributed among twenty churches in about 2300 parishes.

Yet Orthodoxy still gives off a whiff of the exotic orient. The BBC report on the Francis-Kirill meeting was followed by another piece, asking the question on every BBC reader’s mind, “What Is the Orthodox Church?” For many, it’s the church of icons and incense; of secretive rites, hushed chants, and garish ornamentation; of tall men with long beards and black cassocks. “Orthodoxy – it’s sort of like Catholicism, right?”

The answer is, of course, No. But as Nicholas Denysenko argues in his Liturgical Reform After Vatican II, the Orthodox influence on Catholic liturgical reform has been significant. He describes the mutual exchange of liturgical insight and resources among Orthodox and Catholics. One stream came from pre-Soviet Russia: “Liturgical scholars did not merely compile editions for the purpose of narrating liturgical history: they also posed questions directed towards understanding the historical development of the liturgy from antiquity to the received tradition of the synodal-era Russian church. In the late-nineteenth century, the bishops of the Orthodox Church in Russia inaugurated a process of church-wide discussion on potential reforms that would equip the Church to meet the pastoral challenges confronting modern Russia.” He concludes that “one of the most critical periods and contexts for Orthodox liturgiology was in pre-revolutionary Russia.”

Among the Russian emigres, however, “the Orthodox émigrés transitioned from liturgical archaeology to liturgical theology. Orthodox liturgical theology centered on the relationship between the Church and the Eucharist.” The most important insight to emerge from this Orthodox ferment, and one that had the deepest impact on the Catholic church, was the revival of an idea of differentiated priesthood, with a resulting emphasis on the priestly character of the laity. Denysenko writes, “the most important aspect of cross-pollination between East and West has been underdeveloped and functions as the apparatus for the liturgical reform: the common development of a definition of Christian priesthood grounded by Christ as the High Priest who eternally offers the liturgy to the Father, and the communication of this religious identity to lay men and women who actively participate in the liturgy to minister as God’s priests to the world. The multi-layered priesthood rooted in Christ the High Priest and the active participation of the laity in the liturgy are the two central pillars of liturgical reform that illuminate its ultimate aim.”

This priesthood was liturgical, but was not confined to the liturgy: “Liturgical reform does not stop at the transformation of the Church: through the service by the people of God to the world in their daily lives, liturgical reform seeks the transformation and transfiguration of the world as well.” Vatican II emphasizes the same point: “the council fathers elevated liturgy to the highest stature in the life of the people; liturgy provides the spiritual energy required to achieve the noble and bold objectives of Vatican II: to build up a church of priests who transform and transfigure the world.”

This is one of the main benefits of the Orthodox “invasion” of the past century.

February 17, 2016 What Anselm Didn't Do
Browse Our Archives
Related posts from Leithart 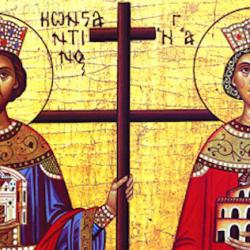 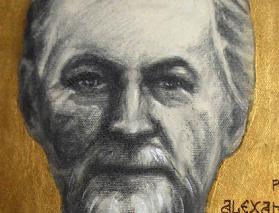 Evangelical
Sacred and Secular at the Lord's Table
Leithart