Sacred and Secular at the Lord’s Table

Sacred and Secular at the Lord’s Table August 31, 2017 Peter Leithart

Russian Orthodox liturgical theologian Alexander Schmemann died in 1983, but his importance continues to grow, and in surprising ways.  A Russian transplanted to Paris and then to Crestwood, New York, he was an acute observer of the American religious scene.  He possessed the clarity of vision the Spirit often grants to those who stand outside looking in.

Schmemann is, for instance, sharply critical of activist, pragmatic, progressivist American Christianity.  Writing in 1963 (For the Life of the World), he observed that the “simple optimism and euphoria of the ‘Social Gospel’” had collapsed before “existentialism with its anxieties . . . [and] neo-Orthodoxy with its pessimistic and realistic view of history.”

Yet, a fundamental premise of the social gospel remained, the notion that Christianity is “first of all action.”  For Christians of this mindset, “Christianity has simply lost the world.  And the world must be recovered.  The Christian mission, therefore, is to catch up with the life that has gone astray.”

Schmemann charges that many Christians take the “eating and drinking man,” the man of secular everyday life, “quite seriously, almost too seriously” since “he constitutes the virtually exclusive object of Christian action.”  Activists complain that the church has spent “too much time in contemplation and adoration, in silence and liturgy,” and not enough time “with the social, political, economic, racial and all other issues of real life.”

He mocked the vulgarity of books on “Religion and Life (or Society, or Urbanism, or Sex . . .),” and he slyly asked: “Suppose we have reached at least one of these practical goals, and have ‘won’ – then what?” Schmemann is musing on the flaws in mid-twentieth century mainline liberalism, but several of his criticisms hit home against twenty-first century evangelicalism.

Schmemann argues that the dichotomy between the sacred and common produces the pragmatic secularized Christianity that he abhors. He notes that at the opposite end of the spectrum from Christians who take the “eating and drinking man” too seriously are Christians for whom “life” means “religious life.”  According to these, “religious life is a world in itself, existing apart form secular world and its life.  It is the world of ‘spirituality’” (p. 12).  For religious believers, the church’s mission consists in “converting people to this ‘spiritual’ life, in making them ‘religious.’”

Schmemann wants a relevant Christianity, and he argues that the advocacy of “‘religious’ life makes the secular one – the life of eating and drinking – irrelevant, deprives it of any real meaning save that of being an exercise in piety and patience” (p. 12).  Schmemann sees clearly, however, that the way to relevance is not to leap over the wall of separation into a secularized form of Christianity, or to join religious and secular life with a copula. Rather, he argues that these two ends of the spectrum are two sides of the same coin, the two options left open once the sacred and secular have been cordoned off from one another in a natural/supernatural dualism.  Schmemann explains in one of the greatest opening paragraphs in the history of theology:

“Man is what he eats.” But what does he eat and why?  These questions seem naïve and irrelevant not only to Feuerbach. They seemed even more irrelevant to his religious opponents.  To them, as to him, eating was a material function, and the only important question was whether in addition to it man possessed a spiritual “superstructure.”  Religion said yes.  Feuerbach said no. But both answers were given within the same fundamental opposition of the spiritual to the material. “Spiritual” versus “material,” “sacred” versus“profane,” “supernatural” versus natural.

Faced with a choice between worldly activist Christianity and otherworldly spiritual Christian, Schmemann simply refuses to choose. Instead, he proposes an alternative that is creationist, eschatological, Eucharistic, liturgical. He started from creation, pointing out that Adam was created a hungry being, with a need to take life in from without, but insisting that the food Adam needed was never purely “physical” sustenance: “In the Bible the food that man eats, the world of which he must partake in order to live, is given to him by God, and it is given as communion with God.” Every eater enters a banquet of God’s bounty, and every meal occurs before the face of God.  For Christians, every meal is potentially eucharist, beginning from and infused with thanksgiving.

Further, it is precisely this world, the world of eating and drinking, of baking and banking, that Yahweh and Jesus put at the heart of Christian worship. At the center of Christian worship stands a table, and the climactic event toward which all liturgical action moves a meal of bread and wine, a feast on the good things of this earth.

That eschatological reality has come in Jesus, the firstfruits of the resurrection, and, as the church Fathers saw with great clarity, the eschatological banquet begins already now in the Eucharistic meal.  The bread and wine of the Eucharist are the this-worldly foretaste of the marriage supper of the lamb, and thus show the trajectory of the entirety of this world.  All of creation is destined to be what the Eucharist now is, all destined to be the medium of our communion in Christ with the Father through the Spirit.

For Schmemannm, the Eucharist is the clue to the relation of nature and the supernatural, sacred and secular.  The Lord’s Day feast and the weekday feast are not spatially separate, so that each is external to the other.  Rather, they are distinguished temporally, eschatologically, and the fact that the age to come has invaded this age means that the everyday meal becomes infused with Eucharist.

Anticipating the eschaton, the Eucharistic meal of bread and wine already enfolds the world of baking and banking into the sacrament, so that baking, eating, drinking, banking, and all else, become various modes of communion with God. 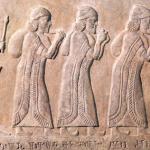 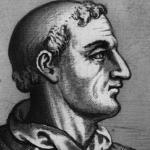 August 31, 2017 Medieval Impurities
Browse Our Archives
get the latest from
Evangelical
Sign up for our newsletter
POPULAR AT PATHEOS Evangelical
1