What do we do when we disagree about what the Scriptures say? Augustine’s answer to that question has rarely been put into practice.

This from The Literal Meaning of Genesis: “And when we read in the divine books such a vast array of true meanings, which can be extracted from a few words, and which are backed by sound Catholic faith, we should pick above all the one which can certainly be shown to have been held by the author we are reading; while if this is hidden from us, then surely one which the scriptural context does not rule out and which is agreeable to sound faith; but if even the scriptural context cannot be worked out and assessed, then at least only one which sound faith prescribes. It is one thing, after all, not to be able to work out what the writer is most likely to have meant, quite another to stray from the road sign-posted by godliness. Should each defect be avoided, the reader’s work has won its complete reward, while if each cannot be avoided, even though the writer’s intention should remain in doubt, it will not be without value to have extracted a sense that accords with sound faith.”

And this from On Christian Teaching: “Anyone with an interpretation of the scriptures that differs from that of the writer is misled, but not because the scriptures are lying. If, as I began by saying, he is misled by an idea of the kind that builds up love, which is the end of the commandment, he is misled in the same way as a walker who leaves the path by mistake but reaches the destination to which the path leads by going through a field. But he must be put right and shown how it is more useful not to leave the path, in case the habit of deviating should force him to go astray or even adrift.”

As anyone who knows Augustine’s career knows, he wasn’t advocating an interpretive free-for-all. He insisted that the Scriptures could be understood, and he knew there was a difference between true and false interpretation, a difference that was enforceable by church authorities (at least!). At the same time, he acknowledges that there’s a “vast array of true meanings” in Scripture, that various interpretations can achieve the aim of Scripture, which is love, and that there is such a thing as reaching the destination by the wrong route.

How different church controversies might have been if everyone had absorbed Augustine’s hermeneutical generosity. 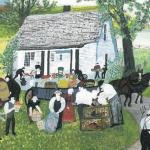 August 14, 2017 Welcome to Leithart
Browse Our Archives
get the latest from
Evangelical
Sign up for our newsletter
POPULAR AT PATHEOS Evangelical
1