Modernization is itself “about everyone becoming urban, mobile, literate, articulate, intellectually intricate, physically fastidious, and occupationally flexible. It is about learning how to cultivate people and symbols, not fields or herds. It is about pursuing wealth for the sake of learning, learning for the sake of wealth, and both wealth and learning for their own sake. It is about transforming peasants and princes into merchants and priests, replacing inherited privilege with acquired prestige, and dismantling social estates for the benefit of individuals, nuclear families, and book-reading tribes (nations).”

That is, “Modernization . . . is about everyone becoming Jewish.”

Yet other have taken up traditionally Jewish tasks: “Some of the oldest Jewish specialties— commerce, law, medicine, textual interpretation, and cultural mediation— have become the most fundamental (and the most Jewish) of all modern pursuits. It is by being exemplary ancients that the Jews have become model moderns.”

Nationalism is “the principal religion of the Modern Age,” since it “represents the new society as the old community and allows newly urbanized princes and peasants to feel at home abroad.” Many nationalisms are directly and explicitly inspired by the nation of Israel, especially biblical Israel: “Every state must be a tribe; every tribe must have a state. Every land is promised, every language Adamic, every capital Jerusalem, and every people chosen (and ancient). The Age of Nationalism, in other words, is about every nation becoming Jewish.”

Modern “prophecy” is Jewish in inspiration, as are anti-modern prophetic traditions: “Freudianism, which was predominantly Jewish, proclaimed the beleaguered loneliness of the newly ’emancipated’ to be a universal human condition and proposed a course of treatment that applied liberal checks and balances (managed imperfection) to the individual human soul. Zionism, the most eccentric of all nationalisms, argued that the proper way to overcome Jewish vulnerability was not for everyone else to become like the Jews but for the Jews to become like everyone else. Marx’s own Marxism began with the proposition that the world’s final emancipation from Jewishness was possible only through a complete destruction of capitalism (because capitalism was naked Jewishness). And of course Nazism, the most brutally consistent of all nationalisms, believed that the creation of a seamless national community was possible only through a complete destruction of the Jews (because Jewishness was naked cosmopolitanism).”

As Slezkine says, the Jewish Century is also the century of anti-Semitism.

Slezkine categorizes Jews as a paradigmatic “mercurial” people, wanders, merchants and travelers who in contrast to the settled devotees of Apollo: “Hermes’ protégés communicated with spirits and strangers as magicians, morticians, merchants, messengers, sacrificers, healers, seers, minstrels, craftsmen, interpreters, and guides— all closely related activities, as sorcerers were heralds, heralds were sorcerers, and artisans were artful artificers, as were traders, who were also sorcerers and heralds” (18).

They were both admired and feared by other peoples: “Whatever they brought from abroad could be marvelous, but it was always dangerous: Hermes had the monopoly on round-trips to Hades; Prometheus, another artful patron of artisans, brought the most marvelous and dangerous gift of all; Hephaestus, the divine blacksmith, created Pandora, the first woman and source of all the trouble and temptation in the world” (18).

Modern mercurial peoples “were perpetual resident aliens and vocational foreigners.” They were unsettled and their “origin myths and symbolic destinations were always different from those of their clients—and so were their dwellings, which were either mobile or temporary. A Jewish house in Ukraine did not resemble the peasant hut next door, not because it was Jewish in architecture (there was no such thing) but because it was never painted, mended, or decorated. It did not belong to the landscape; it was a dry husk that contained the real treasure—the children of Israel and their memory” (18-19).

Nomadic don’t define themselves by place by by heritage and time: “All nomads defined themselves in genealogical terms; most ‘service nomads’ persisted in doing so in the midst of dominant agrarian societies that sacralized space. They were people wedded to time, not land; people seen as both homeless and historic, rootless and ‘ancient'” (19).

The key thing was the difference itself: “Because only strangers could do certain dangerous, marvelous, and distasteful things, the survival of people specializing in such things depended on their success at being strangers.”

In our unsettled modern age, we are all “mercurial. Which is why, in Slezkine’s terms, the modern age is the Jewish age. 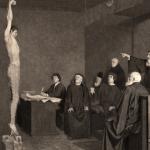 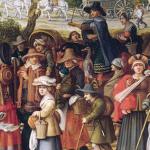 January 10, 2018 Aliens in the Mystical Body
Recent Comments
1 Comment | Leave a Comment
Browse Our Archives
get the latest from
Evangelical
Sign up for our newsletter
POPULAR AT PATHEOS Evangelical
1