In Saving the Appearances, Owen Barfield describes the consciousness of early humanity as follows: “The human soul may be one of the ‘stopping-places’ for mana, but what differentiates the primitive mind from ours is, that it conceives itself to be only one of those stopping-places and not necessarily the most significant. The essence of original participation is that there stands behind the phenomena, and on the other side of them from me, a represented which is of the same nature as me. Whether it is called ‘mana,’ or by the names of many gods and demons, or God the Father, or the spirit world, it is of the same nature as the perceiving self, inasmuch as it is not mechanical or accidental, but psychic and voluntary” (42).

This runs counter to the 19th-century explanation of primitive mythology, which Barfield describes as “the nineteenth-century fantasy of early man first gazing, with his mind tabula rasa, at natural phenomena like ours, then seeking to explain them with thoughts like ours, and then by a process of inference ‘peopling’ them with the ‘aery phantoms’ of mythology, there just is not any single shred of evidence whatever” (42).

That is: Early men initially encountered the world just as we do, since that’s the natural way to encounter it, and then projected onto the natural phenomena a host of ghosts.

On this basis, Barfield inverts the usual contrast between archaic and modern: “whether or no archaic man saw nature awry, what he saw was not primarily determined by beliefs. On the other hand . . . what we see is so determined. If I am right therefore, there is indeed a contrast between primitive and modern consciousness and that contrast is connected with beliefs, but in exactly the opposite way to what is generally supposed” (58).

How is this so? Barfield points to Galileo as one who exemplifies the shift. The shift wasn’t merely from Ptolemaic to Copernican theory; it was a shift in the nature of theory itself. The Ptolemaic system was defended as a theory that “saved the appearances,” that accounted for all the known phenomena. Galileo took the further step of arguing that an appearance-saving theory was physically true (50-1).

In sum: “Our collective representations were born when men began to take the models, whether geometrical or mechanical, literally. The machine is geometry in motion, and the new picture of the heavens as a real machine, was made possible by parallel developments in physics, where the new theory of inertia (in its early form of ‘impetus’) assumed, for the first time in the history of the world, that bodies can go on moving indefinitely without an animate or psychic ‘mover.’ It was soon to be stamped indelibly on men’s imaginations by the circumstance of their being ever more and more surrounded by actual artificial machinery on earth. The whole point of a machine is, that, for as long as it goes on moving, it ‘goes on by itself without man’s participation.’ To the extent therefore that the phenomena are experienced as machine, they are believed to exist independently of man, not to be participated and therefore not to be in the nature of representations. We have seen that all these beliefs are fallacious” (51).

We, not our forefathers, are bewitched by our beliefs. 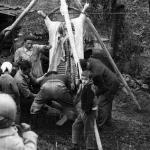 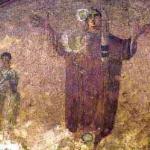