The Passion Narrative is  about Jesus’ arrest, trial, and death; it’s about the Son of Man being “delivered up.” But there’s a lot more going on. The story is actually woven of several distinct stories.

The disciples and a woman are central to the story in verses 6-13. During the last week of Jesus’ life, He has been traveling back and forth from Bethany to Jerusalem (21:17), and after He ends His discourse He and the disciples go back to the village to stay with Simon, identified as a leper (v. 6).

Apparently, he is a cleansed leper; it is unlikely that a leper would host a dinner party. Healed or not, he is one of the marginal, “poor” Israelites with whom Jesus identifies. While the chief priests and elders gather to plot in the official palace of the high priest, at the center of Israel’s religious power-structure, Jesus goes to a meal with a leper. At dinner, a woman anoints Jesus’ head with oil (v. 7), an extravagant act of devotion.

Jesus says it is for His burial (v. 12). The woman is the only one at the table who has believed what Jesus has been telling everyone for a long time – that He has come to Jerusalem to die. The disciples have heard this again and again, but even when Judas shows up with the soldiers in Gethsemane, the disciples try to fight them off. They don’t really believe that Jesus is headed to the grave, but the woman does.

Her good work is proclaimed with the gospel because she’s the only one to understand the gospel. She announces it ahead of time, just as women will be the first witnesses of the resurrection, and the first of the church’s evangelists. The anointing identifies Jesus as King and Priest. He goes to the grave not as a victim but as a triumphant conqueror, the Christ, the son of David.

He looks passive, as He gets traded from hand to hand. But He is the good Shepherd, and the Good Shepherd lays down His life of His own accord. His death is not a tragedy; it is not a sorry episode. It is the last triumphant act of Jesus, the Son of Man.

But the story turns on the price the woman paid for the perfume. Her prodigality highlights another part of her role in the story. She stands in contrast to the disciples. Matthew simply tells us that the perfume was “very costly,” but John says that the disciples estimate the value at 300 denarii, which is nearly a year’s worth of wages for a day worker. We’re talking about thousands of dollars, and it all pours out in a few minutes, all poured out on Jesus’ head and, John tells us, on His feet.

It’s an act of extreme extravagance, and the disciples are indignant. It’s easy to scoff at the disciples’ response. They say that the gift is excessive, extravagant, obscene. The same money could have been distributed to the poor, put to use, invested, shared, used in ministry. We would likely share the disciples’ objections.

The contrast with Judas is even sharper. She has spent a year’s wage honoring Jesus, preparing Him for death. Judas accepts thirty pieces of silver to hand Jesus over. Not every disciple is a Judas, of course, but eventually they will forsake Jesus and run away. They betray Jesus without being paid.

Besides, they, like Judas, apply standards of value that don’t fit. The Twelve complain about the extravagance of the woman’s offering. They value the perfume monetarily; how much does it cost – too much? They suggest that it would be better to choose something more prudent and reasonable to offer Jesus. They value Jesus too low, just as Judas does. Judas is the extreme example of a mindset that all the disciples share, a tendency to judge value in monetary terms.

When the disciples complain about the expense and suggest that the money used for the ointment should have been spent on the poor, Jesus defends the woman. She has done a “good deed” (v. 10). Jesus’ words sound cold, as if He is telling the poor to wait their turn while He bathes in luxury. Of course, the church’s first love is Jesus, her Lord, but in the previous chapter, Jesus identified ministry to the poor and ministry to Him (25:31-46).

Another key to understanding Jesus’ words is His reference to His body (v. 12). The woman anoints His head, but He speaks of His body. That helps us get a handle on what Jesus is saying. While Jesus sits at table, the woman pours perfume on His body for burial.  Soon that body won’t be there, but Jesus says at the close of the gospel that He will continue to be with them (28:18-20).

How?  Not in the buried body, but in the risen body, which is present through the agency of the Spirit, and which is also present in the Spirit-filled body of disciples. Me you will not always have with you, Jesus says, but He will be with them in the body, in the poor, the “least of these My brothers.” For Jesus, extravagant generosity to the poor and extravagant devotion to Him amount to the same thing. The woman is doing what the sheep do in the judgment scene in chapter 25 – doing good to the “least.”

We are about to hear the story of man putting God on trial, man rejecting God, man putting God to death on a cross, but also of a God whom death cannot hold, a God who will not accept man’s rejection but goes even through death to deliver us. Yet we start out the narrative with stories about a woman who wastes a year’s wages on a consumable gift for Jesus, about disciples wrangling about the extravagance, about Judas haggling over Jesus’ blood money and getting a bad deal of it. We’re entering on great mysteries, but Matthew wants to talk about money. No wonder: He’s a tax-collector, after all.

It’s not that Matthew is obsessed with money. The point is that that following Jesus, being a disciple, taking up the cross and following Him to His death and grave, requires a revaluation of our values.

Judas is the negative example, of course, but the disciples are only lesser versions of Judas’ system of values. The model is the woman. The woman knows that wealth is for worship.

Her act is, after all, an act of worship. The woman approaches Jesus, draws near like a priest to the temple. According to John’s account, the fragrance of the perfume fills the whole house, like the shining glory of the Lord descending on the temple. She is drawing near to honor her Lord, drawing near as the bride Israel to anoint and minister to her Lord. She gives extravagantly, imprudently, because she is giving to Jesus.

The woman is commended because she understands. She understands that Jesus is beyond price, and that He deserves everything we have, and more than we can give. She understands that if we want to follow Him our scale of values has to be remade from top to bottom. If we want to be Jesus’ disciples, and follow the woman’s example of “good deeds,” we must be prepared to follow this king, the king who is delivered up, and up, and up, finally delivered up to the cross. We need to learn to imitate her extravagance, which is the extravagance of Jesus Himself, the Good Shepherd who gives Himself for His flock. 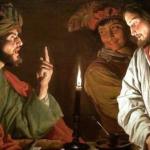 March 29, 2018 Do This
Recent Comments
1 Comment | Leave a Comment
"NOOOOOO 😭😭Z.2633K.US/ab4859Z"
Moon-Lily Tamar the Righteous
"wow! pretty fast, i must sayf.636WN.CO/Nq4859U"
joeman123456 The Hidden One
"I ship them, come at me however u want I don't care. I want them ..."
TheEventHorizon Tamar the Righteous
"After reading it, I couldn't help thinking of my favorite book💯W.GEOGIPHY.COM/R4859m"
FaqSands Divine Simplicity: An Experimental Response
Browse Our Archives
Related posts from Leithart 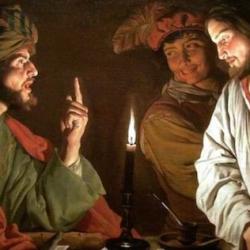