That refrain doesn’t just tell us that the discourse is over. We know the discourse is over because the red lettering stops, or the quotation marks end, or in the original Greek simply because Matthew goes on to begin telling us another episode. We know all this. Why does Matthew have to tell us?

Matthew is drawing on the language of the first chapters of Scripture. After Yahweh has created, Genesis 2 tells us that He “finished” His work. Yahweh is introduced to us in Scripture as a speaking and creating God, a God who creates by speaking, a God who speaks the worlds into existence. Jesus is the incarnation of that creating God; through His words, he is speaking a new world into being, speaking a new Israel into existence.

Matthew has used similar phrases before, but this one is different. This time, Matthew doesn’t simply say that Jesus “finished these words,” but that “Jesus finished all these words.” That “all” is a hint that we are entering a new phase of Jesus’ ministry. His words are ended. Jesus is finished speaking to Israel.

Matthew is alluding to the concluding chapters of Deuteronomy, where we learn that Moses’ words are “complete” or “perfected.” Jesus has said all that must be said; His discourses to Israel are perfect, and like a new Moses, He is getting ready to complete His work by His death, and then to send His disciples, like a new Joshua, off to disciple the nations.

During the next several chapters, Jesus says almost nothing. He’s been chatty throughout the book; He has offered long discourses, and when the Pharisees charge Him, He defends Himself. He doesn’t do that any more. He says only one word during His trial before the high priest – a warning that the Son of Man will be enthroned, and that the high priest will see it. He says even less before Pilate. He has finished all His words.

This is also an announcement of judgment against Israel. From the beginning of His ministry, Jesus has been talking – He’s laid out a way of righteousness and peace for Israel, commissioned His disciples, disclosed the secrets of the king of heaven, told His disciples how to govern their communities and about the demand for forgiveness, and the demand to avoid offense to children.

Israel never listens. Instead, the Pharisees try to catch Him in His words; priests and elders plot against Him; they accuse Him of being in league with the devil. So Jesus announces the judgment that waits for Israel, and then stops. He has no more words for Israel, and when He again turns to teaching at the end of Matthew’s gospel, He’s sending His disciples to the nations, the Gentiles, to teach them all that He’s commanded.

Instead of being an active teacher, Jesus is almost reduced to an object. Instead of speaking to adoring and attentive crowds, Jesus is passed from hand to hand to hand. The verb “deliver up” is used some 15x in Matthew’s final chapters, often translated as “betray.” Jesus says He will be delivered up (v 2), then Judas offers to deliver Jesus into the hands of the Jews (vv 15-16).

Matthew makes it clear that this is not the whole story, however. Jesus turns passive; He seems to lose control. But Matthew makes it clear that He in fact continues to be in control. Jesus knows that He is going to be delivered up, and He announces it again, as He has repeatedly, to His disciples. “After two days,” the Passover begins (v. 2). That is, on the “third day” Jesus the Passover Lamb will be slaughtered, just as He will be raised on the “third day.” His deliverance comes as no surprise.

More than that, Matthew makes it subtly clear that the chief priests and elders are not in charge of this plot. The one element of the plot that we know about has to do with the timing, and they stick with that plan for the space of about 10 verses before they begin changing course. Once Judas’ appears, the priests and elders abandon their careful plans and carry out their plot during Passover.

Worse, they aren’t able to avoid what they’re trying to avoid. The key element of the plan is announced in verse 5: “Not during the festival, lest a riot occur among the people.” The word for “riot” occurs only one other time in Matthew, where it describes the “uproar” among the Jews who are rioting in front of Pilate’s Praetorium (27:24). Because of the uproar, Pilate washes his hands and delivers Jesus up to the Jews.

The conspirators are not in charge. Their plots are not effective. They gather, they plot, they attack the Lord and His anointed. But the one who sits in heaven laughs at them. He knows that their plots amount to nothing, that what really determines the future is the word of God, the fulfillment of Scriptures, the plots of Jesus. So much for the careful plotting, shown to be comically ineffective insofar as it opposes the Scriptures and the Lord’s “counter-plot.”

Besides, the whole series of events is already scripted. It is part of the fulfillment of Scripture, down to the tiniest detail. Judas goes to the chief priests and offers his services in handing Jesus over, and they give Him thirty pieces of silver. The priests pay Judas 30 pieces of silver to betray Jesus (Matthew 26:15).  The amount of the payment takes us back to Exodus 21:32 and Zechariah 11:12-13.

In Exodus, this money appears in a law dealing with dangerous animals. An ox that is wild and dangerous, and is in the habit of goring people has to be restrained. If the ox kills someone, then the owner is responsible. If the dead person is free, the punishment can take the form of a ransom payment, whatever the family of the dead person demands. If the person gored is a slave, the owner of the ox pays the slave’s owner thirty shekels of silver as compensation. Thirty pieces of silver is thus the price of a slave; that’s how much Judas values Jesus.

And the thirty pieces of silver evokes the larger concerns of the law. Animals are supposed to be submissive to their owners, and animals that go wild and kill people are like the serpent, a beast of the field that attacked Adam and Eve. Israel is supposed to be like the Lord’s work animal, plowing and threshing the world in obedience to Yahweh, but Israel has become a demon-possessed ox.

Jesus charges that Israel is an ox that has a habit of goring. Every prophet, every servant that Yahweh sends ends up dead, gored by the ox that is Israel. Jesus, too, is going to be gored, surrounded, as Psalm 22 says, by the bulls of Bashan whose mouths are like the mouths of lions. 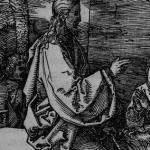 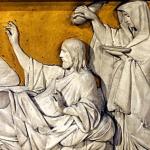