In the third volume of his magisterial Post-Reformation Reformed Dogmatics, Richard Muller offers a helpful summary of pre-Reformation discussions of divine simplicity. Today, simplicity is making a comeback, taken as essential to orthodoxy. Muller’s discussion is a healthy reminder that “the doctrine of divine simplicity has not always been understood in the same way or received the same emphasis in theology.”

At a minimum, simplicity provided a way of buttressing unity and heading off any idea of composition, and hence of dependence. Muller writes, ““The doctrine of divine simplicity . . . belongs to the full locus de Deo, the larger topics of essence, attributes, and Trinity—and it belongs there as having the specific function, not of ruling out distinctions per se, but of allowing only those distinctions in the Godhead that do not disrupt the understanding of the ultimacy and unity of the One God. With very few exceptions in the history of the doctrine, discussion of simplicity, in the context of the full locus, provides the place at which the datum of divine oneness is coordinated with one level of distinction ad intra, corresponding with the distinction of attributes, and another level of distinction ad intra, corresponding with the necessarily different distinctions among the three divine persons.”

Citing the work of Basil Krivocheine, for instance, Muller claims that in Nyssa, “the notion of simplicity is seen to be the exclusion only of compositeness and division, not of other kinds of distinction, notably the distinction between divine hypostases and divine energies or powers.”

In Augustine too, simplicity was compatible with certain kinds of ad intra distinctions: “Augustine affirmed the divine simplicity on the ground that God is not composite and is devoid of accidents and did so primarily in the context of the doctrine of the Trinity as an affirmation of the fundamental unity and uniqueness of the Godhead. Nonetheless, Augustine indicated that (in addition to the distinction of the persons in the Trinity), there was some distinction of attributes: he spoke of God as ‘both simple and manifold,’ having a ‘simple multiplicity or multifold simplicity.'” In his doctrine of divine ideas, further, “Augustine also assumed that God knows these distinct ideas as distinct ideas.”

Theologians of the middle ages “took a patristic conception that, in its most strict forms, could stand in a problematic or paradoxical relationship to the distinction of divine attributes and the doctrine of the Trinity, and worked to develop a more nuanced and flexible concept that could rule out composition while at the same time allowing for the ‘operational complexity’ of the Godhead.” More elaborately that patristic writers, the medievals “argued that the identification of ‘simplicity’ as uncompoundedness did not rule out either the distinction of divine persons or the distinction of divine attributes. Indeed, it would be one of the burdens of scholastic argumentation to identify precisely what kinds of distinction there might be in the simplicity or uncompoundedness of the Godhead.”

Operating within a Platonic frame, Anselm affirmed simplicity against the notion that there are accidents in God. For Anselm, this was largely a way to affirm aseity: “it is the same for God to be just and to be justice itself, given that the justness or righteousness of God is not a separable property as righteousness is in human beings. This must be so, Anselm argues, inasmuch as God is just through himself, not through or on the basis of a prior justice in another.”

Gilbert de la Porée’s theology sparked a debate over simplicity, which ended with “the rejection of a theory of real distinctions among the divine attributes and the affirmation of a basic doctrine of divine simplicity.” The debate didn’t, however, fully clarify “whether the attributes are merely distinct ad extra and in our human comprehension or are distinct in some manner ad intra apart from consideration by a human knower.”

Dolf te Velde (Doctrine of God, 58) draws this conclusion from Muller’s evidence: “Even around key concepts such as divine simplicity and freedom, Reformation and post-Reformation theology inherited a diversified tradition, of which it could weigh the elements on their own merits.”

As I say, a healthy reminder – of the ambiguity of the concept of “simplicity” and the dangers of assuming that Thomas’s doctrine simply is orthodoxy. 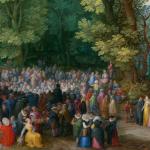 December 12, 2018 Mammon and Modern Economics
Recent Comments
1 Comment | Leave a Comment
"I'm pretty safe in telling you that you, like all human beings, interpret. Translation is ..."
Christopher Laird Theology’s Handmaid, Again
"In accordance with reason."
Mat Kay Don’t Do, Don’t Desire
"Very good, Peter- you clarified for me about Judah and Tamar. Thanks!"
JimBull2 Tamar the Righteous
"Fantastic essay and strong finish -- "Heraclitus has taken institutional form. Flux has become our ..."
tovlogos Apocalypse Now?
Browse Our Archives
get the latest from
Evangelical
Sign up for our newsletter
POPULAR AT PATHEOS Evangelical
1