The Pope, the atheists, and salvation by grace 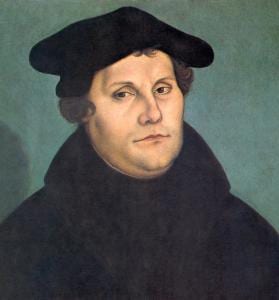 Some of my conservative evangelical friends have been upset (or perhaps even gleeful?) this past week over the rather old news that the Pope said that atheists could go to heaven. Apparently an article from the Independent in 2015 has been circulating on social media, no doubt because it was originally published in October. I mistakenly thought it was something new the Pope had said, at first. But it’s still worth commenting on, since this weekend is when many Protestants celebrate “Reformation Day.”

For many conservative Protestants, the idea that atheists can be saved by “following their conscience” is confirmation that “Rome” doesn’t teach the Gospel and that the Reformation was badly needed. On the face of it, saying that people who lack faith in God can be saved by striving to do good is a classic case of “works righteousness.”

But in fact, as I see it, it’s the other way round. It’s the conservative insistence (whether Protestant or Catholic) that a particular religious affiliation or set of beliefs is necessary that constitutes “works righteousness.” And it really doesn’t matter so much what we say the content of that required set of beliefs or practices is.

Consider first of all the things that we all agree on.

1. All traditions of Christianity agree that we do not earn our salvation by doing a certain number of “good works” or “more good works than bad,” however “good works” are defined. That’s an easy target for evangelicals and it’s an error into which poorly catechized Christians of nearly any tradition are prone to fall because it’s a kind of commonsense moralistic theism. But it’s not the teaching of any Christian church.

2. We also all agree that human beings cannot save ourselves by our own efforts: that the gift of eternal life is something that far surpasses the power of any created being to obtain. (This is actually something more clearly affirmed in Catholicism than in Protestantism. At least some versions of Calvinism seem to say that in principle unfallen humans could have kept the “covenant of works” and thus obtained salvation, and the Reformed tradition rejects the Catholic teaching of the “superadded gift” needed to elevate even an unfallen creature to union with God.)

3. Furthermore, the mainstream Western Christian tradition in particular (Catholic and Protestant) holds that because we are fallen we are no longer, without grace, capable of doing meritorious works (or, in classic Protestant traditions, any truly good works at all). Our will is “bent in on itself” and even apparently good actions are corrupted by the “lust for dominance” that pervades fallen human beings.

4. We all agree on what a regenerate, justified person looks like–a person who is pleasing to God. Such a person has a faith that consists not merely in acceptance of the truth revealed by God, but a trust in God’s mercy and a commitment of oneself to God that goes along with love of God and neighbor and expresses itself in good works (though marred by imperfection due to our fallen state and/or our creaturely limitations).

5. And finally, not only Christians but Abrahamic religions generally (Judaism and Islam) agree that God is good and gracious and forgives the sins of those who are repentant, so that in fact total moral perfection is not necessary. (Western Christians, particularly evangelicals and other conservative Protestants, tend to claim that in principle this perfection _is_ necessary and that God can only forgive because of the sacrifice of Jesus, while Jews and Muslims say that God forgives simply because God is merciful. But we all agree that God’s kingdom will be full of forgiven sinners rather than people who never failed in any way.)

Paul and the “works of the law”

A lot of the disagreement among Christians about salvation has historically focused on the interpretation of Paul’s writings, particularly Romans and Galatians. Paul argues that salvation comes through faith in Christ rather than the “works of the law” or sometimes just “works.” Traditionally, Christians assumed that Jews believed that they earned salvation through these works. Christians have argued whether the works in question are specifically the works commanded in the Mosaic law or good works generally. Before the Reformation, the latter position was understood to refer to good works done without the help of grace (as in the later writing of Augustine).

Luther introduced the radical idea that Paul was referring to all good works without exception, even those done by Christians who have received God’s grace and forgiveness. (Protestants often claim to find this in early Christian writers, but I think the passages they appeal to do not actually express a position as radical as Luther’s.) For Luther, the dichotomy between faith in God’s mercy and works that we do to “impress” God continues to operate even as we seek to obey the commands of Christ as Christians. If we ever think that the works of love that express our faith are themselves a basis for God’s acceptance of us as righteous, then, according to the mature Luther, we cease to be forgiven sinners and become self-righteous under God’s condemnation.

In recent decades, the “New Perspective on Paul” has returned to the idea that the “works” Paul dismisses are specifically the works of the Jewish Torah. (New Perspective scholars, particularly those like N. T. Wright who are evangelical Protestants, tend to minimize the agreement between their position and more traditional Catholic arguments, but in my opinion this is a rather unconvincing attempt to safeguard their Protestant credentials.) However, the New Perspective scholars seek to avoid the anti-Jewish implications of the older position.

The most revolutionary part of the New Perspective is the claim that Jews did not think they were “saved” in the Christian sense by doing the works of the Torah. It doesn’t seem that Jews of the “Second Temple” era (or their rabbinic successors) thought they could earn God’s favor by obeying the commands of the Torah. As I said above, all “Abrahamic” monotheists believe that ultimately we depend on God’s mercy and forgiveness.

Rather, according to the New Perspective scholars, the Torah was a set of commands that marked out the boundaries of God’s people. Obeying the commands of the Torah (the “mitzvoth” in Jewish terminology) was the sign of being in a covenant relationship with God rather than a way of earning God’s favor.

The New Perspective scholars don’t agree with each other, and I’ve skated over a lot of controversies and difficulties in their arguments. (For instance, many argue that the phrase translated “faith in Christ” actually means something more like “the faithfulness of Christ.”) And of course not everyone is persuaded by any version of the New Perspective.

Lest anyone should boast

But I think we can safely affirm this, whether on “New Perspective” grounds or on more traditional ones: whatever Paul meant by the “works” that are opposed to “faith,” they are inherently works that give one set of people a reason to “boast” over another. It is clear, if nothing else, that Paul was not opposed to the works that flow from love. In Galatians, his most “anti-works” letter, Paul summarizes it this way: “For in Christ Jesus neither circumcision nor uncircumcision counts for anything, but only faith working through love.” (Galatians 5:6, ESV.)

Therefore, I believe that insofar as conservative Protestants make “faith” something that visibly divides some people from others and gives one religious group the right to claim that other religious groups are damned, they are in fact making faith into a “work” in the Pauline sense and are no longer actually talking about saving faith at all.

Turning the Gospel of grace into self-righteousness

Luther’s message remains powerful 500 years later because he glorifies God’s grace, God’s ability to show mercy to those whom the pious think unworthy. But as long as we insist that this only applies to people who hold certain beliefs, we aren’t really following through on this radical insight at all. We are domesticating it and turning it into a new form of self-righteousness.

Luther argued, in some of his writings, that infants could have faith. Indeed, he suggested that they were perhaps the ideal believers, precisely because they couldn’t “do” anything. Many traditional Protestants express their understanding of faith with the metaphor of the “empty hand.” But if the hand is truly empty, doesn’t that imply, in principle, that it is empty of ideas as well? (To be clear–I’m well aware that I’m going beyond Luther in this, though I’m following in the footsteps of Barth.)

Opening ourselves to the fire of God’s love

God’s grace is like a great cataract, a blazing fire. We can close ourselves off to God’s action of mercy and thus turn the fire of God, for us, into a fire that destroys and condemns. But a lack of intellectual belief in the existence of God (God whose infinite reality makes every concept of Him pitiful and ludicrous) does not cut us off.

The one thing that does is a lack of love for our neighbor. The one sure sign of a person who is receiving God’s free and unmerited mercy is genuine love for neighbor. And the surest sign of a person who is in grave danger of damnation is a disposition to think oneself better than others, to condemn others. It doesn’t matter whether you do this in “Catholic” language (you don’t belong to the One True Church!) or evangelical language (you haven’t given your heart to Jesus) or any other language. Including, to be sure, liberal language (you are an intolerant, dogmatic person).

And so our best approach, for the good of our own souls, is not to judge. Instead, we should leave one another in the hands of the Infinite Mercy, and focus on exposing every cranny of our own souls to the transforming fire of God’s love.

It would not be a bad thing to say in the words of one of the Desert Fathers, “All, all shall be saved, and I alone shall be damned.”

That ancient monk was closer to the core insight of Luther than someone who uses the gospel of justification by faith as an excuse for condemning others.

November 29, 2020 The Parable of the Talents Revisited
Recent Comments
1 Comment | Leave a Comment
Browse Our Archives
Related posts from Light in the West

One response to “The Pope, the atheists, and salvation by grace”