While reading Omid Safi’s new book, Radical Love: Teachings from the Islamic Mystical Tradition, I was among editors from London’s media outlets attending a briefing on how the British public perceive Muslims, based on research commissioned by the Aziz Foundation. The book was sitting in my purse as we heard some staggering statistics: nearly one in three Brits feel negatively toward Muslims, three times higher than the closest religious group. Among these sceptics, 91% feel more suspicious of Muslims after terror attacks.

The findings were a jarring contrast to the passionate love that drips from the pages of Safi’s collection of poetry from several dozen Muslim mystics, passages from the Quran and sayings of the Prophet Muhammad. I walked out of the meeting with a visceral sense that the Islamic path of Radical Love, or Eshq, is the antidote for neutralizing the violent associations that Islam is readily smeared with in the mainstream imagination.

There are, admittedly, many books of sufi love poetry dedicated to the impassioned verses of Rumi, Hafez, Attar and others — my own Mevlevi spiritual teachers have translated stunning compilations of Rumi, in particular.

Safi adds something unique and important for this juncture of human history. He brings together the voices of generations of lovers of God into a single, richly nourishing anthology, translating them anew to take into account modern language, references and sensibilities.

It’s like a tasting menu; the reader gets a generous sampling of morsels of Islamic mystical wisdom drawn from sufis over the centuries. It’s ideal for dipping into for moments of inspiration in our fast-paced, distracting, consumer-driven lives, where spiritual growth is readily sidelined.

The Path of Radical Love, madhhab al-‘eshq, argues for a different way of relating to God than is typically associated with Islam. Emphasizing unity and oneness, it challenges human tendencies to divide and erect barriers among ourselves, often in the name of religion, culture or tradition. It is lived and breathed through humans who have done the personal work of confronting their own egoism to become reflectors of Divine qualities of on earth.

In his introduction, Safi posits that the lovers of God whose poems fill his book are “boldly impatient.” While everyone is promised to meet the Creator face to face in the Hereafter, these individuals long to know God here and now. Lovers strive to make the Divine real in their daily lives by living and breathing Love in every moment and circumstance. He likens Radical Love to alchemy: it illuminates everything in us that is cheap and base, transforming it into gold.

“As Rumi says, it is through this Radical Love that the bitter becomes sweet, the thorn turns into a rose, the pain contains healing, and the dead come to life,” writes Safi.

But Radical Love encompasses more than the inward psychological journey to our innermost hearts. It’s also about engaging with humanity by nurturing beautiful relationships and creating communities that are harmonious, promote dignity and bring about justice in the world. Radical Love needs to be lived and embodied here and now, in the “messiness of earthly life.”

“For the mystics of the path of radical love, love (Eshq) is not a sentiment or an emotion. It is the very overflowing of God onto this realm. It is this radical love that erupts out of God, bringing us into being. It is this love that sustains us, and it will be this cosmic current that will carry us back home.”

Safi’s book is an impressive undertaking. His delicate renderings of the Quran and Hadith capture the essence that’s been sorely lacking in the traditional translations many of us grew up with. I found his rendition of the Quran’s first verse, Al-Fatiha (The Opening), poetic and enchanting. His approach reminded me how important it is to consciously approach the Divine with love, rather than projecting our own egoism onto Him/Her.

A God Closer Than…

I created humanity
I know what whispers into your soul…

A Heart to Contain God

My Heaven cannot contain Me
Neither can My Earth

But the heart
of My faithful devotee
suffices Me
~Hadith

Dipping into Safi’s book feels like witnessing a spiritual conversation, or sohbet, between a lineage of God’s closest friends, all seated around the same circular table, united in their desire to “make God real, make love real and let love shine.”

Opening it at random, you find Fakhr al-Din ‘Iraqi, a contemporary of Rumi who died in 1289, seated next to Abu Abd al-Rahman al-Sulami, who lived more than 250 years earlier. Elsewhere, a drunk Rabi’a — a woman who lived during the eighth century in Iraq — staggers in intoxication with God’s love beside the 13th century poet Farid al-Din ‘Attar. His most famous work is Conference of the Birds, an allegory depicting the collective journey of mystics making their way to the Beloved — essentially, the very thing Safi brings to life in his book.

In our own times, Sufism is unfortunately sidelined from the mainstream conversation. It’s not as contentious or eye-catching to talk about ecstatic love of God as it is to give the spotlight to terrorists who have polluted faith with their own toxic egoism. Yet the lovers of God are always there, forming, as my teacher once put it, the endocrine system circulating through the bloodstream of humanity.

Several days after that media briefing, I tried to imagine what would have happened if I’d been inspired to pull out Safi’s book from my purse and had each editor seated around the boardroom table randomly open and read aloud a poem. That thought came to me as I lingered at a verse of Shams of Tabriz, the spiritual guide who ignited a flame of love in Rumi’s breast.

While Rumi’s words are sprinkled dozens of times in Radical Love, Shams makes only one appearance near the end of Safi’s book and — in his characteristic way — pierces right to the heart of the matter:

Imagine this:
People all over the world
are gathered
making a circle
around the Kaaba

They bow down
in prayer

Remove the Ka’ba
from the middle of the circle

Are they not prostrating
toward one another?

They are bowing down
toward each other’s hearts 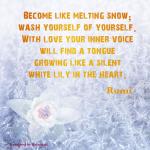 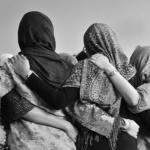 September 5, 2018 Struggling with Service
Recent Comments
0 | Leave a Comment
"I Think this is an informative and interesting blog so I think it is very ..."
Uniswap x How Awake Are We? When Waking ..."
"you weren't on this train i hope: https://www.bbc.com/news/wo..."
mike malzahn Entering the Garden
"what could a mere mortal possibly do to hurt the feelies of an all powerful ..."
crackerMF The Hajj and Forgiveness
"These are chemically induced delusions, and the real world is still there when the effects ..."
David Cromie What if Allah is Beautiful and ..."
Browse Our Archives
Related posts from The Living Tradition