The movement into a new year naturally makes us reflect on the passage of time. For me, it all began over Christmas as I watched the 2016 adaption of Tolstoy’s War and Peace on Netflix. I confess that long ago I once started reading the novel but never got round to finishing it – I wish I had now. The adaptation is one of the best things I have seen on the big or small screen in a long time. In portraying the romances and rivalries of the protagonists it captures human frailty so well. How foolishly they (like us) are swept away by their passions, as well as by the larger sweep of destiny. If I had to summarise the themes I took away from the adaptation, I would say the novel is about learning to forgive the moral frailty of others as we recognise our own, and learning to persevere, and even give thanks for, our suffering as well as our joy. And perhaps, on the deepest level, it’s about experiencing ecstasy in the face of an immense and magnificent process: God unfolding His/Her qualities in time – perhaps, even, as Time.

There is a memorable scene in which Andrei, wounded by cannon shot, is taken to the surgeon’s tent and finds himself lying on a bloody operating table next to his nemesis, Anatole, whom he has vowed to kill. Anatole is in the throes of agony as his shredded leg is being amputated. In that moment, Andrie reaches out his hand to take hold of Anatole’s. As I play this scene over again in my mind, these lines from Mevlana come to me:

Everyone in the world, whether man or woman,
is dying and continually passing through the agony of death.
Regard their words as the final injunctions
which a father gives his son.
In this way consideration and compassion may grow in your heart,
and the root of hatred and jealousy may be cut away.
Look upon your kinsman with that intention,
that your heart may burn with pity for his death agony.
Everything that is coming will come:
consider it to have already arrived;
consider your friend to already
be in the throes of death, losing his life.

Tolstoy and Rumi seem to be asking: What if we could live our lives from the vantage point of that surgeon’s table all the time? We have been gifted with an imagination that allows us to project back and forth through time to gain another, deeper perspective. How crucial it is that we use this gift! When Rumi urges us elsewhere to ‘Pass into sight, pass into sight, pass into sight!’ it is surely the kind of sight that Tolstoy is helping us to cultivate through his novel. One way or another, time is surely dragging us painfully towards this enlightened perception.

Our tendency is to experience time as an enemy. We have, at the very least, our inevitable physical decline and death to look forward to, and time has a knack of defeating all our ego’s ambitions too. The Quran puts it succinctly:

Consider time . . . .
Truly, human beings are in loss
Except those who have faith and do righteous deeds
And encourage each other in the teaching of Truth
And of patient perseverance.

In War and Peace, a striking example of time exposing human hubris is Napoleon’s failure to conquer Russia. His opponent, the Russian general Kutuzov, acts with rare restraint and understands the virtue of non-doing, despite being immersed in a culture of vain bravado, violence and excess. Engaging in combat only when absolutely necessary, Kutuzov allows Napoleon to capture Moscow without resistance, knowing that time will defeat him. Stranded in Moscow, running out of supplies as winter approaches, Napoleon seethes with frustration as Kutuzov refuses either to surrender or attack, but simply waits. In the end, Napoleon must retreat and suffer a prick to his grandiosity. But it is emblematic of what all the protagonists in the novel experience: each in their different way is eventually caught in a merciless circumstance which frustrates their ego’s ambitions. Yet the wisest perceive the mercy in their undoing; some other plan is unfolding, infinitely more beautiful and vast than their own.

Just before midnight on New Years’s Eve, I listened to a short talk by Elizabeth Hin that brings these reflections on time into sharper focus. In it she describes how, in the dichotomy of space/time, we tend to focus on space, grasping after, and fighting over, things on the material plane. But something transformative happens when we shift our focus to time instead, especially as we experience it through our breath. She offers us the following practice for 2020:

In our breath, let go of the breath, so we exhale gently. And on the inhalation, we let breathe in our next moment, so that we are receiving time as a blessing, as something beneficent, benevolent, a grace, a moment of life. And then what begins to happen is all of the material plane is secondary; space is following time, at least in our perception. So that we enter the next moment receiving time as a blessing, and then our consciousness tends to be so much more harmonious about space. . . .

For Beth, an appreciation of time through meditative breathing is key to developing virtue. Time should not be our enemy but our intimate friend, she is suggesting. Her perspective is supported by a striking Hadith Qudsi (words from Allah to Muhammad outside the context of the Quran) in which Allah says, “Do not blame time or despair of time, because I am time.”[iii] For the Sufis, ad-Dahr, Time Itself, is one of the names of God (though not part of the traditional ninety-nine). How crucial, then, that we cultivate a proper relationship to it.

Taking a New Year’s reckoning of myself, I find that my relationship to time is very poor. How petulantly I try to push and pull it; what little patient perseverance I show! Absorbed in my own desires, I pay little attention to its texture, its qualities. Attempting to develop a more attentive, intimate and loving relationship with time, even briefly over these last few days, has been a remarkable experience. This is my resolution for 2020: to court Time.

Our relationship to time is one of the key themes of the fantasy novel Uroboros: The Circle of Time by Tania Henzell-Thomas, which I had the honour of helping to publish in 2019. In the era of ‘grimdark’ fantasy, in which morally compromised or ambiguous anti-heroes battle their way through a world where virtue cannot be discerned from evil, let alone triumph over it (think Game of Thrones), Uroboros is an oddity. It harks back to the era of ‘high’ fantasy in which virtue clearly triumphs, but, for me, it pushes the genre even further into radically profound territory. Although there is suffering and hardship, there are no villains and no fighting (those looking for the gratuitous violence of grimdark will be sorely disappointed). The noble protagonists of the novel actually ‘do’ relatively little, and their salvation unfolds miraculously for them. The emphasis for the heroine is on patiently persevering, witnessing, and expressing wonder and gratitude, rather than on action. Time Itself is the main actor, unfolding as something vital and beneficent, the uroboros of the title being an ancient symbol of cyclical renewal.

Some historians (as well as many lovers of grimdark fantasy) would probably find such notions of time completely ridiculous. There is no justice in history they would say; the strongest and most ruthless thrive, not the most virtuous. They would find incomprehensible Rumi’s saying ‘Time is aware of kindness’[iv] – for them, time is without awareness, a meaningless march towards human extinction and, eventually, a cold, dead universe. Yet, this is tragically short-sighted, denying the existence of vast spiritual realms beyond the meagre material one on which we commonly base our assumptions. In War and Peace, as Andrei lies bleeding on the battlefield he gazes into the sky’s blue infinity and pierces through this illusion. Letting go of his ego’s ambition to be a great actor on the world’s stage, he begins to have a glimpse of the Actor.

This isn’t to say that War and Peace and Uroboros encourage passivity. Their protagonists must courageously play the part they are called upon to play, but both novels, like the famous Bhagavad Gita, direct us to the Actor beyond the human actors. History is not really made by great men or women, nor by blind unconscious forces, but by something quite astounding and miraculous. The great Sufi master Kharaqani put it this way: “Make extraordinary and bold efforts on the path, but remember who the Doer is.”[v] These novels drive home the second part of that aphorism at a time when we need to hear it more than ever.

However, as if to stress the first part of Kharaqani’s advice, a song has also been haunting me over the New Year: Bob Dylan’s ‘Up to Me’. Capturing the mood of our times, it begins on a startling note of dismay: ‘Everything went from bad to worse’ before making its way to this verse:

If I’d have thought about it, I never would have done it, I guess I would have let it slide
If I’d have paid attention to what others were thinking, the heart inside me would have died
But I was just too stubborn to ever be governed by enforced insanity
Someone had to reach for the rising star, I guess it was up to me

I never took this to be one of Dylan’s protest songs, but that is how I hear it as we now begin 2020. For things were bad, but since the general election here in the UK they have got much worse. We, the British people, bewitched by the media and ‘governed by enforced insanity’, have collectively voted against our own best interests in favour of a ruthless financial elite. Get ready: God’s plan is still unfolding, and it’s up to each of us to play our part. 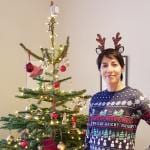 January 28, 2020 “God appears in the one in whom poverty is complete.”
Recent Comments
0 | Leave a Comment
Browse Our Archives
Related posts from The Living Tradition