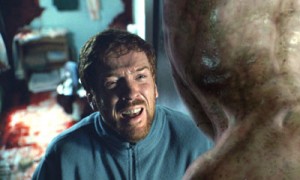 I don’t want to write this review.

But you are here to read about whether you should spend your hard-earned money on Dreamcatcher, and I don’t want you to waste your money, so let me exhort you: Run away. Run as fast as you would run if somebody invited you to a movie in which aliens burst, in bloody fountains, out of the characters’ backsides. Why? That’s what happens in Dreamcatcher. I am not making this up.

And that’s just the tip of the crap heap.

Usually I search a film for meaning or significance. But Dreamcatcher seems to start over every fifteen minutes, and none of its many and varying threads amount to anything like a meaningful story. Oh, sure, there’s Good versus Evil, so that must reflect something meaningful, yes? Well, not really, because “good” in this case refers to a group of chauvinistic, shallow, boastful, sex-obsessed guys who get drunk all the time. So it’s more like Stupid versus Evil.

The only insight to be gained from Dreamcatcher… How Not to Make a Movie.

Dreamcatcher was directed by Lawrence Kasdan from a script that he co-wrote with William Goldman. Kasdan once wrote The Empire Strikes Back, my all-time favorite sequel. And he directed The Accidental Tourist, The Big Chill and Grand Canyon which have some commendable qualities. Dreamcatcher is new territory for him. We should send in the paramedics to haul him out as quickly as possible. Perhaps his co-conspirator William Goldman is the same man who wrote The Princess Bride — I find that hard to believe, listening to the painfully non-humorous dialogue of these ridiculous, unpleasant characters.

Stephen King also has a bit of explaining to do, since this is based on his book. Even if the script fails miserably to represent the book, I wonder if King was on auto-pilot when he drew up the basic outline. The story revolves around a cabin in the snowy woods (as in Misery and The Shining) where characters with psychic powers (The Shining, Hearts in Atlantis) contend with sewer-related monsters (It) and a disfiguring plague (The Stand) The secret to their psychic power lies in the experiences they shared together as young boys dealing with bullies (Stand by Me). Adding to King’s self-plagiarism, the filmmakers heap on derivative special effects, borrowing heavily from Alien, Aliens, The Thing, Independence Day, and Donny Darko.

I’ll  try to summarize the plot, but it’s not easy. I challenge you to name a movie with a more convoluted or preposterous storyline.

Here goes: Four men were once “gifted” with psychic powers after they saved a strange handicapped child from bullies. Now grown men, with apparently nothing to do but get together, get drunk, and talk about their sexual exploits, they head out for a sort of male-bonding vacation in the snowy woods, where they stumble into something really disgusting. Monsters are taking over the bodies of human beings and animals, like the beasties in Alien and The Thing, and spreading fast. As their psychic powers prove to be of little help against these fearsome creatures, they end up in the middle of a war zone, while a Special Forces unit of the U.S. Military moves in to try and annihilate the monsters.

That’s the basic sketch. I’m biting my tongue here — to go further is to start revealing the gaping plot holes and inconsistencies. For example: These psychic powers only seem to work when they are absolutely necessary to advance the plot. Whenever they really need the powers, it never seems to occur to them to use them. If you removed the psychic powers from the plot, would it drastically change the story of the alien invasion? No. Do the powers end up saving the men in the end? Hardly. The powers, like most other things in the film, are just another borrowed device meant to lend some general creepiness to the experience but signifying nothing.

It’s even more complicated than that: One of the characters apparently has a very detailed memory. And this is made manifest in the film as an imaginary house, which we tour, watching him shuffle through old boxes of papers that represent his memories. Thus, when aliens try to take over his body and mind, we are treated to mad chase scenes through this “hall of memories.” But there’s a problem: Where is the suspense in chase scenes that aren’t actually taking place? The memory hall is not real… it’s just an image that’s supposed to be helpful. So what good are the mad dashes, the attempts to hold doors shut while claws come through, etc.? Do these represent, somehow, specific ways in which he is trying to protect himself from possession? Who knows? An interesting concept, but it doesn’t work.

Then there are all of the subplots about the military operation, about their leader (Morgan Freeman) who spouts nothing but military-movie clichés (“I’m ready to kick some ass!”) and black-actor action-movie clichés (“I’m getting too old for this shit.”) As if the clichéd dialogue isn’t enough… they also drag in the General Who Has Gone Mad formula. Freeman’s character is named Curtis — not Kurtz, but close enough.

Stupid, sex-obsessed, half-mad human beings versus aliens. It seems there’s no hope for earth… unless the aliens are even more stupid than the people. And that’s a good possibility. After all, we are told that if the aliens get one of their little worm-like spawn to reach a major water supply, they can infect the whole population. But for years, they have failed, crashing their spaceships into remote wildernesses. Why not just crash into an ocean or a water reservoir?

So goes the thought-process of an alien that lays eggs inside of human beings, causing serious bouts of indigestion, and then the babies come bursting out of their victims’ hind-quarters. And yes, we have to watch this happen — on toilets, in beds, with men, women, and dogs. You think diarrhea is unpleasant, you ain’t seen nuthin’ yet. Kasdan seems far more interested in sickening us than generating any real suspense.

Hollywood literally pulled this one out of its butt. I could go on providing evidence, but I’m already experiencing some of the nausea and disorientation that this film gave me as I suffered through it.

September 18, 1999
The Innocence Mission - Birds of My Neighborhood
Next Post