[This review was first published at the original Looking Closer website in December 2000.]

All the Pretty Horses, director Billy Bob Thornton’s adaptation of the great Cormac McCarthy novel, must have been a marvelous film.

But this is not that film.

This feature-length montage of scenes from Thornton’s as-yet-unreleased movie has breathtaking cinematography, reminiscent of the wild and beautiful natural world captured in Terrence Malick’s films. Its performances, especially the crucial roles played by Matt Damon and Henry Thomas, are engaging, tough, and convincing. The music, when Daniel Lanois is playing guitar, is enchanting. The story is compelling, full of challenging ethical dilemmas and soul-searching dialogues.

But everything else is a problem.

When Billy Bob Thornton put together his final cut of All the Pretty Horses, it ran more than three hours long, reportedly. And rightly so. The novel is a strong, sweeping epic. But here, in the movie that resulted from the studio’s demand for cuts, it is barely two hours long, and it rushes frantically to pack in the important events of the first two acts so that Acts Three and Four have some resonance. What we have is are big-screen Cliff’s Notes for the novel.

The credits claim that the movie stars Matt Damon, Penelope Cruz, Henry Thomas, Ruben Blades, Bruce Dern, and more. I saw Damon and Thomas, and there were brief appearances by Cruz. Blades showed his face a few times, but rarely spoke. And Dern… well, he gets a few choice moments at the end, and that’s all.

The opening act is a choppy ride across the border into Mexico. John Grady Cole (Damon) and his pal Rawlins (Thomas) are headed out to find ranch work, when they are joined by a suspicious youngster named Blevins (Lucas Black, who starred in Thornton’s Sling Blade.) Blevins is a tough-talking kid on the run from something, who knows what. He also claims to be a human lightning rod. Grady is patient with the youngster, but Rawlins is worried. Before long, Rawlins’ worries will prove to be frighteningly well-founded, and Cole will find that he is kindness has led the two of into deep trouble.

During this chapter, the music by Marty Stuart seemed to me all wrong… a bombastic, stereotypically American anthem, announcing that something quite exciting was going on, when it wasn’t. The occasional flourishes of the musical score by Daniel Lanois sound much more fitting to the tone of the story: tentative, spooky, spiritual. I suspect that the Stuart soundtrack was inflicted on the picture by the studio, to give it a more commercial and traditional flavor. Thornton had worked with Lanois just fine on Sling Blade, and I can’t imagine why he’d toss away such evocative work.

Grady and Rawlins, as the story goes, gets a good job on a ranch and falls for the ranch owner’s daughter Alejandra (Penelope Cruz), just in time for old ghosts to come back and haunt him. The romance at the heart of the film happens so rapidly, with so little development of dialogue or relationship between Grady and Alejandra, we don’t understand Grady’s compulsion, his willingness to risk all that is important to him in order to be her man.

Later, when he suffers horrible injustice in a Mexican penitentiary, we begin to truly fear for what will become of him. Damon’s performance here is especially strong, looking at first like he expects to wake up from this nightmare, then slowly accepting its agonizing reality. Then, the prison chapter of the story ends so abruptly you might swear that somebody has loaded the wrong reel of film!

The concluding episodes feature a violent adventure, which seems to be intact (because, of course, audiences love adventure), but then wraps up with a fleeting courtroom scenario that seems implausible due to its brevity.

I have not seen this film yet. Instead I have seen broken pieces that promise a wonderful whole. It taunts us with glimmers of greatness, but then tells us what the studio thinks audiences want, not what the director wanted us to see. Watching this film is like being told you’ll have a scenic tour of the country on horseback, and then you’re strapped to a bucking bronco. I walked away saddle-sore and disillusioned, having only glimpsed the greatness of what I’d come to see. 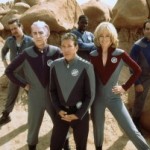