[This review was first published at the original Looking Closer website in 2001.]

Sometimes humans are more beastly than their pets.

Christopher Guest’s new “mockumentary” about dog shows, Best in Show, revels in that fact. The nine human beings that converge on Philadelphia for the Mayflower dog competition seem themselves to represent a wide variety of breeds, grooming styles, and gaits, regardless of the quality of their dog. They all want to be validated by the success of their particular pooch. And the pressure has them all on the edge of cracking.

Guest is drawn to this sort of context. In This is Spinal Tap, which he co-wrote with Rob Reiner, he spoofed heavy-metal showbiz, turning the volume up to 11 on the pomposity, lunacy, and theatrical bombast of arena rock. In one of the 90s most underappreciated comedies, Waiting for Guffman, he painted an affectionate portrayal of a small town drama group dizzy with Broadway ambition while they prepare a musical. In both films, most of the humor came from a wide array of characters who are blind to their own eccentricities. But Guest was able to treat them warm-heartedly, so audiences could enjoy their company and see themselves mirrored in these exaggerations, like looking into a warped mirror at an amusement park.

Best in Show continues the tradition. In the company of spoiled dogs, these characters reveal their own pride, their own aspirations, and their own alarming breaking points. The movie might as well have been about a fashion show for children, a sports car exhibit, or an art show. The owners are the real subject here. Their treatment of each other, their bark, their bite, and, of course, their mating habits… we learn more than we might care to from behind-the-scenes bickering and boasting.

Guest has an affection for human oddities. He isn’t afraid to tell us the embarrassing and alarming truths about his subjects, but, as Steve Martin does with characters in his own films, he finds room to forgive and even admire them. They’re too crazy to be real, and yet I’ll bet we all know people who behave like these folks. And if we’re honest, we’ll admit that we sometimes can be so petty ad so proud.

The film focuses most on Gerry and Cookie Fleck (Eugene Levy and Catherine O’Hara), a middle-class, rural couple whose unlikely marriage is peppered with uncomfortable mysteries. Levy has a strange disorder of the feet. O’Hara’s has a list of ex-boyfriends a mile long, and it’s a small world; much to Gerry’s chagrin, these exes seem to be waiting behind every tree. Their journey to the dog show becomes something of a marriage encounter, and we wonder if the trials of their journey will break them apart or bring them together.While almost all of their scenes are laugh-out-loud funny, they do become endearing personalities; we care about what happens to them in the end.

Stefan Vanderhoof (Michael McKean) and the flamboyant Scott Dolan (John Michael Higgins) are a gay couple who spend more time grooming themselves than their criminally-cute canine. Harlan Pepper (Christopher Guest himself) southern-drawls about his bloodhound’s telepathic powers, his own strategies in fishing, and a budding interest in ventriloquism. Kennel owner Jane Lynch (Christy Cummings) brags about the champion poodle owned by the grossly-glamorous Jennifer Coolidge (Sheri Ann Ward Cabot). And Parker Posey and Michael Hitchcock are the far edge of frightening, their marriage based on name-brand fashion wear preferences and varities of Starbucks coffee.

The most outrageous personality of all waits until the final chapter of the film to appear. Fred Willard plays Buck Laughlin, the show’s television broadcast announcer, and he brings down the house with his dimwitted commentary, self-absorbtion, and unintentionally revealing one-liners. Willard became one of my favorite comic actors in Roxanne, when he played the small town’s mayor and declared, “I would rather be with the people of this town than with the finest people in the world!” Here, he’s funnier than he’s ever been, as Laughlin relentlessly delivers inappropriate banter. (”It’s terrible to think that in some countries, these dogs are eaten!”)

Best in Show stretches out its scenes to allow for more improvisational genius, more unlikely moments of manic hysteria, more subtle observations about its characters. Frankly, I think the movie could have used another twenty minutes. Not more laughs, necessarily. But 90 minutes doesn’t give us much time to think about what Guest might be suggesting about human nature. Perhaps he just wants to have fun, but I sense a striving for something more. I suspect he wants to show us something about the nobility of simple accomplishments. There is a celebration of simple folk, of teamwork, of small victories. And, as in Guffman, there’s an appreciation for the spectacle of those events… dog shows, community theater, or whatever…that bring people together and challenge their creativity. If Guest wants to do this, I think he might dig a little deeper.

But that’s a minor gripe. In a year when comedies are rushing to new lows in crass humor and mean-spiritedness, Best in Show is an excellent example of how funny a movie can be merely by observing human nature honestly, at its brilliant best and miserable worst. It’s only 90 minutes long, but I’ll bet it’s the best hour of laughs you’ll find at the movies all year, and probably one you’ll want to revisit again and again.

May 11, 2004
Coming Home to Ohio: A conversation with Over the Rhine's Linford Detweiler about the New Double Album
Next Post 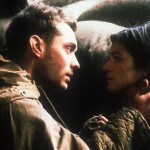