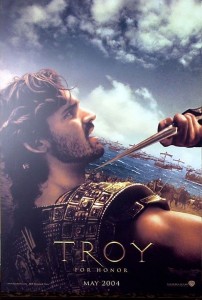 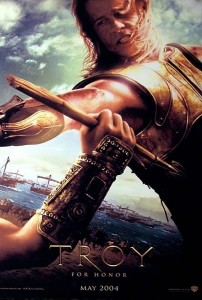 There are many all-star players on the court for this exhausting, energetic tournament, but Achilles (Brad Pitt), a point guard with a deadly jump-shot is the superstar. He’s also a free agent. The Spartans have had him in the starting lineup for many spectacular match-ups, but they’re not guaranteed that they’ll hang on to him for this championship match. Achilles doesn’t like the Spartan coach, Agamemnon (Bryan Cox). Agamemnon has never been defeated, and his ego has swollen to Shaquille O’Neill proportions. He wants to defeat every team in the league and use his riches to secure the crown, not just this year, but for many years to come. He’s all about establishing the ruling franchise all around the Agean Sea.

Achilles hates Agamemnon’s arrogance. He also refuses to respect any of the corporations that own the teams. In fact, he scorns them — both Zeus and Apollo — saying that corporations aren’t all that, and really it’s the athletes themselves that deserve the glory, since they do all the hard work, suffer so much, and burn so brightly.

The Spartans are marching to take on the Trojans of Troy, a formidable team led by Coach Priam (Peter O’Toole), the only one that the Spartans haven’t defeated. The Trojans also have a remarkable record. They’ve never been beaten on their home court. Their defense is simply unbeatable. And they’ve got Priam’s son Hector (Eric Bana), as dominating as any power forward in the league. The imminent showdown between Achilles and Hector is going to have the sportscasters hyperventilating with excitement.

But the Spartans may have the momentum in this tournament. They have rage on their side. If you’ve read the gossip columnists in the sports section, you’ll know that Paris, Priam’s other son, a guard who usually sits on the bench for his lack of natural talent, also happens to be a “hottie” with the ladies. He’s stolen the heart of Helen, wife of Agamemnon’s brother. So in this war, it’s personal. Agamemnon’s happy to have that kind of scandal going on — it gives his team added emotion that they will use when they’re out on the court. If only Agamemnon can keep from alienating Achilles with his ego, victory seems assured.

Okay, as you know… I’m lying to you. Troy isn’t about basketball franchises at all — it’s an adaptation of Greek legends that have been told and re-told, most famously by Homer in The Iliad. Wolfgang Petersen’s supersized-budget version boasts a big, brawny, superstar cast including Brad Pitt (Achilles), Bryan Cox (Agamemnon), Eric Bana (Hector), Orlando Bloom (Paris), Brendan Gleeson (Menelaus), and, best of all, Peter O’Toole at the top of his game (Priam). Playing the cheerleaders—er, I mean, the hapless, fickle, hunk-worshipping women—Diane Kruger (Helen) and Rose Byrne (Paris’s “virginal” sister Breisis) do their best to show us that neither royalty nor religious conviction stood a chance against Paris’s salon-styled curls or Achilles’ oiled pectorals.

No, this movie isn’t about sports page superstars, but it might as well be. These characters — almost to a man — are concerned about only one thing: themselves.

Side note: I should confess that part of my dislike for this film stems from my dislike of its source literature. I’ve always loved The Odyssey, but The Iliad always struck me as empty, chaotic, and hellish in its free-for-all of proud fools up against the wills of ridiculous gods.

Achilles lives to be worshipped and remembered, and he’ll consent to fighting for a craven king in order to secure his place in history. Since the gods he’s been brought up to believe in have very little to promise in the way of an afterlife or peace, he’ll settle for earthly gold. The filmmakers present Achilles with just the sort of treatment he would have wanted. He’s a muscular war machine, so idealistically toned and conditioned that he could probably have earned far more fame and glory as a Calvin Klein underwear model than he did on the battlefield.

Agamemnon is a bile-spewing conqueror who doesn’t much care if his brother gets satisfaction for the infidelity that set off the rivalry. He just wants to rule, to knock down enemy gods. He’s happy to keep his men content by casting Trojan women to his men to play with like blow-up dolls.

Menelaus? We have no sympathy for this cuckolded husband, since he clearly doesn’t know the meaning of the word Love.

Hector teases some of our sympathies out, in that he clearly cares about his father, his lovely family-oriented wife (the always-stunning Saffron Burrows), and his daughter. But he folds far too quickly after his initial protest of his brother’s hormone-driven foolishness. And when the world’s greatest point-guard challenges him to a one-on-one slam-dunk contest in front of the main gates, he goes out to accept the challenge in the name of some kind of “honor” that out-ranks the importance of his wife, child, and the people depending on him for battlefield performance. Eric Bana’s whole performance is in that angst-furrowed brow. If the script had given him more interesting material, he might have been a real highlight of the film.

Paris? A lot of fans have come to see Orlando Bloom play. It’s not hard to see why — Viggo Mortensen may have won the hearts of those who long for integrity and leadership, but for the high school girls, The Lord of the Rings was The Legolas Show. Every three-point shot hit its mark, even those he fired off at the buzzer. Here, though, Bloom plays almost the opposite. He’s preens and struts for a while, but when he steps out on the court, the other team knocks the ball from his hands, humiliates him, and sends him crawling back to the bench. I’ll bet a lot of Legolas fans are disillusioned now, available for the next heartthrob to step into the spotlight.

No, it’s Achilles glory that wins out as the most memorable and remarkable factor in this tournament. Look at that effortless skill on the court! Look at the flicker of compassion he feels for Breisis, the Trojan woman who has pledged herself to chastity and a service of the gods. He cares about her and her values so much, he seizes upon the first moment of weakness and spoils her in a hotel room, an act for which he can never be arrested, for which he will never be scandalized or placed before a jury. And all the while, he waxes eloquent about how the management — I mean, the gods — are not to be admired or served, because only an existence like his own is really valuable.

Since this film focuses only on the humans, writing off Homer’s fantastic gods as merely the delusions that drive men to foolishness, the unethical men maneuvered by those gods in the legends become merely unethical men making bad choices.

Priam lives and dies by the will of the gods, giving his religious advisers the strongest influence in his military decisions, which vexes his reasonable son Hector. Although O’Toole gives Priam a few Oscar-caliber scenes, and indeed almost makes the film worth seeing when he pours out his love for his family in a confession to his sworn enemy, his character still repels our sympathies. He makes his decisions on the “will” of some absent god whose nature remains a complete enigma to us. Who is this Apollo he claims to worship? Is Apollo in any way worthy of worship? If so, why? Apollo’s certainly not showing up in the VIP Box at the games, where Priam perches watching the battles play out.

Petersen’s Troy is certainly relevant. As I hope my metaphors suggest, we’re living in a culture where men still seek glory, behave as if they are above the law, spurn any real interest in religious conviction or spirituality, and engage with women only as accessories or escapist pleasure on the side, letting other priorities outshine the importance of their own families.

But rather than provoke us to reflect on the emptiness of lives lived without the fear of a benevolent god, Troy does its best to make us admire and respect these reckless, self-absorbed fools. What makes the film fail in the end is its earnest attempt to act as though there was honor in that world of spiritual chaos.

Audiences will come away with the “buzz” that an energetic, skillfull action epic can give. Their base appetites for violence will be satiated, and that violence will not have been placed in any truly meaningful context. Their appetite for sex will have been titillated … by male T&A rather than Hollywood’s preferred variety. And for those who didn’t get enough CGI ‘crane-shots’ of ocean-sized armies crashing into each other in The Lord of the Rings, they’ll get a large helping of those.

And yet there’s nothing original or creative about Petersen’s direction. David Benioff’s script admirably distills the main points of The Iliad and other Troy-oriented stories into storytelling that is somewhat engaging and well-paced. He and the cast make the faux-Shakespearean language sound convincing enough—Sean Bean’s brief appearances as Odysseus are inspiring enough to make us long for a Peter Jackson-directed Odyssey, which would be a much better film. Many critics have criticized it for not selecting a central character for whom we can develop sympathy. But that’s not the problem. Many films — Robert Altman films like Gosford Park, The Lord of the Rings films, and recently The Alamo — have been successful and compelling while tracking a variety of characters. The problem here is more fundamental — there are no sympathetic characters.

If there’s any reason to see Troy, its for the sensational tantrums of Bryan Cox and the riveting pathos of Peter O’Toole. “War is young men dying and old men talking,” sighs Achilles. That may be somewhat true. Similarly, this movie is “young men flaunting and old men acting.”

Nevertheless, as the clock winds down, you’ll probably find that Troy is an empty and dispiriting game, a contest of steroid-ingesting brutes who have made themselves gods in their own minds. And as the film fades out with the voice-over narration of Odysseus, waxing euphoric about how he lived in the time of these heroes, we should stop to count ourselves blessed to live in a world where there are much greater heroes to admire and emulate.

May 25, 2004 Anne Quote of the Day
Browse Our Archives
Related posts from Looking Closer