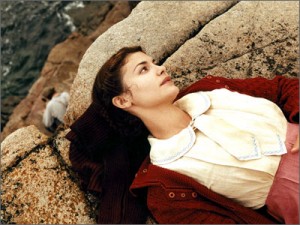 During wartime, art about war can play an important role. It can coax us into contemplation and dialogue about the ethics of violent conflict. It may remind us of the lessons we can learn from the past. Sometimes it offers comfort and even hope during a time of fear, uncertainty, and loss. You could probably name a few favorites with such redeeming qualities: David O. Russell’s Three Kings, Terrence Malick’s The Thin Red Line, Steven Spielberg’s Saving Private Ryan, Edward Zwick’s Glory, and Stanley Kubrick’s Paths of Glory. Kubrick’s later work, Full Metal Jacket, and Francis Ford Coppola’s Apocalypse Now, are sobering portrayals of the madness that war can unleash.

Jean-Pierre Jeunet’s A Very Long Engagement, based on a novel by Sebastien Japrisot, aspires to be a meaningful war film about holding on to hope against all odds. Unfortunately, it assaults our senses with imagery so intense, subplots so disposable, and tones so different that we’re likely to find ourselves bewildered instead of moved, overly entertained instead of enlightened.

Here’s the premise: In the wake of World War I, Mathilde, a beautiful young woman crippled by polio, longs to know the fate of Manech, her fiancé who went off to fight for France. Manech, convicted of self-mutilation on the front lines, was punished alongside four other condemned soldiers. He was ordered to make himself an easy target for the enemy, and he never returned. Conflicting reports about his fate have thrown fuel on the feeble fire of Mathilde’s hopes. She will stop at nothing to find out if Manech survived.

If you’re feeling any déjà vu, that’s because the premise is similar to another epic that arrived at this time last year—Anthony Minghella’s Cold Mountain. But it would be better to describe A Very Long Engagement as a collision of Minghella’s melodrama, Jeunet’s 2001 blockbuster Amelie, and Spielberg’s Saving Private Ryan. Watching it feels like going to an amusement park in the middle of a war zone while a battle is underway. We’re strapped into dozens of dizzying rides, some of which are sickening and terrifying, others that are goofy and strange, and every few minutes our faces are shoved into the grisly horrors of war. There’s no reason that a war film cannot blend comedy and tragedy. But Jeunet is in such a rush that he fails to give us enough opportunities to catch our breath, to consider what’s happening, or to care about the characters.

Engagement, one of only a few films to examine the Great War of 1914-1918, captures battlefield bloodshed in way that will test your nerves, your stomach, and your patience. Bayonet-impalements, shattered heads, bomb-blasted showers of body parts, corpses used as shields against bullets—some moviegoers should steer clear of such sights. In a parallel narrative, an assassin performs brief but severe executions, one involving shards of glass that will make even the toughest viewer wince in dismay. The bloody chaos is interspersed with tangents of Jeunet’s famously comical cleverness and fairy-tale whimsy. One minute, we’re watching French troops charge unshielded into machine gun fire, the other we’re watching Mathilde have sensual daydreams about her missing boyfriend, or we’re chuckling at the way her bicycling mailman tumbles onto her doorstep.

Just as our emotions are jostled back and forth, our sense of chronology is challenged as the narrative makes acrobatic leaps backward and forward in time. A narrator introduces us to enough eccentric supporting characters to fill a phone book. They each have their own particular histories, which are presented in high-speed flashbacks, Amelie-style. Like Amelie, Engagement charges ahead like a runaway freight train, and if you miss anything along the way (which you will), Jeunet seems confident that you’ll take the ride again in order to catch glimpses of the things that you missed. You certainly won’t be bored.

But is all of this excitement worth the exhausting journey?

Some will think so, and they will defend it on the grounds of the cast and the visual wonders.

Amelie‘s Audrey Tautou is a beautiful and engaging Mathilde. Her performance seems like Amelie a few years older, quieter, and more melancholy, but that’s forgivable considering how powerfully she commands our attention. Gaspard Ulliel, who looks like a young Matthew Modine, plays her lost lover with innocence and gentleness. Jeunet gives them some wonderfully intimate moments, including an enchantingly romantic scene lit with matchsticks, that give us reason to believe this is true love that will last a lifetime … if Manech survives the war.

Many of France’s finest actors show up along the way. Fans of French cinema will be glad to see Dominique Pinon (Amelie, Delicatessen), Denis Lavant (Beau Travail), and Jean-Claude Dreyfus (The Lady and the Duke) in memorable supporting roles. The true performance highlight of the film is a show-stopping turn by a famous American actress. (I won’t spoil the surprise here, but if you read other reviews, you’re sure to stumble onto her name.) She’s so fluent in French, so convincing as the tormented wife of a missing soldier, you’re sure to hear viewers whispering in amazement. This unfortunately works against the film; we end up marveling at a conspicuously clever acting stunt instead of being drawn into the story.

These actors move through a whole library of unforgettable—often stunningly beautiful—images. The animators who recreate France circa 1920 have done their work so well, viewers will never suspect that the backdrop is artificial. Production designer Aine Bonetto makes every frame exquisitely elaborate, and director of photography Bruno Delbonnel guides us through as many styles of cinematography as there are chapters in this story. Jeunet brings trenches, a Paris marketplace, and a train station up from the dusts of history, three-dimensional and beautifully illuminated. Even the most fleeting moments leave you awestruck, asking “How’d they do that?” If you blink, you’ll miss a glimpse of Mathilde’s face in a train window that looks like a breathtaking impressionist portrait. In the opening scenes, the famous trench warfare sequence from Paths of Glory is surpassed so powerfully that Kubrick, were he still alive, would have considered it a challenge. Near the end, there is an explosion that would be best described as “gorgeous” if the circumstances surrounding it were not so horrific.

Therein lies the central problem of the film: In his dedication to dazzling spectacle, Jeunet ultimately distracts us from attending to the central story. Instead of arriving at a meaningful conclusion, he wraps up his mixed-media marathon with a solemn acknowledgment of war’s consequences and an optimistic flourish. The film’s overriding sentiment—that hope is a good thing—feels trite and ultimately unsatisfying. If the film is seen by anybody with family members currently on duty in Iraq, it’s more likely to encourage their nightmares than to offer them comfort. In what are we to place our hope? Mere chance? This war movie seems to think so.