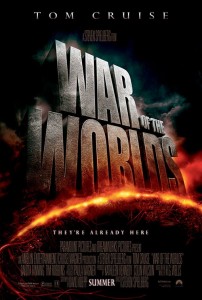 In Steven Spielberg’s War of the Worlds, Tom Cruise runs for his life. Of course he does. That’s what Tom Cruise was born to do. Somewhere, somebody’s adding the latest scenes of Cruise pounding the pavement to an already impressive career-spanning montage. It seems that he’s run from every imaginable threat except Jurassic Park dinosaurs. But has he ever had a better reason to run than he does here? Spielberg’s vision of H.G. Wells’ otherworldly invaders is so terrifying, it made me want to flee the theater.

And, in retrospect, that might not have been a bad idea.

Unleashing some of the most alarming special effects and some of the most upsetting displays of destruction and urban chaos ever filmed, War of the Worlds excels in its technical execution. ILM serves up visual wonders and virtuosic set pieces that make Revenge of the Sith‘s animation look dated already, raising the bar so high for scenes of realistic devastation that it’s unlikely to be surpassed… even when Peter Jackson’s King Kong wreaks havoc in New York later this year.

The film features one of Tom Cruise’s best performances. He’s Ray Ferrier, a dock worker in Bayonne, New Jersey who also happens to be an irresponsible father and divorcée. He gets no respect from his rebellious teenage son Robbie (newcomer Justin Chatwin), and it’s not hard to see why. He’s a selfish, immature pain in the … well, you name it. His young daughter Rachel (Dakota Fanning), who must have inherited her maturity from her mother (a genuinely pregnant Miranda Otto), sees right through him, but she loves him because she should. And we love her for it. Fanning’s performance is so strong, both severe and subtle, that she deserves an Oscar nomination. Spielberg proves he’s still the greatest American director of children.

Too bad he can’t find better writers. War of the Worlds is an impressively compact bit of storytelling, but it gives us only sketchily developed characters… more types of people than people. Rachel has more character than the rest of them combined, so it’s too bad that she spends most of her time screaming and looking traumatized. The mayhem is far more realistic than the people suffering through it.

But mayhem is clearly the film’s strongpoint, and it’s the reason most people will go to see it. After all — it’s War of the Worlds! We’re not here for political commentary or deep, distressing dilemmas of the spirit. We want to see buildings blown up by big alien machines! We want to see special effects that blow our minds! We want dizzying camerawork! And we get all of that. This is Spielberg’s first must-see film since Saving Private Ryan, only because it is so brilliantly executed. There is one camera trick in particular that will make you believe a cameraman can fly. (Watch for it when you see Ray at the wheel of a minivan.)

When it comes to blowing things up, this is Grade-A filmmaking. Grade-A, but harsh enough to deserve an R-rating… even though the MPAA didn’t see it that way. Yes, the film is PG-13. There’s no excessive gore or profanity and nary a mention of sex — but the violence is as troubling as anything in Aliens. Hear this: The MPAA is useless when it comes to movies like this. This is no more appropriate for small children than The Passion of the Christ. The camera doesn’t flinch when fleeing citizens are incinerated by alien death rays right before our eyes. And wait until you see what the aliens do to the poor people that aren’t immediately blasted into clouds of ash. This film will give nightmares to grownups. War of the Worlds is 117 minutes of unrelenting bloodshed and chaos and nerve-grinding tension, at times as fierce as Saving Private Ryan.

The first 30 minutes is the strongest part of the film. The revelation of the alien machines will leave you thunderstruck. And I mean that almost literally. From the dazzling lightning storms, captured brilliantly in all kinds of reflections by the great Janusz Kaminski, to the way the earth erupts all around our frantic heroes, you won’t believe your eyes. As Ray and his family run from one dismaying brouhaha to another, we hardly have time to ask if what we’re watching makes sense. (And sometimes, it doesn’t at all. Who in their right mind with a massive, laser-gunning machine pursuing them would try to escape by jumping on board a slow-moving ferry boat that has “I’m an easy target” painted on the side?)

Spielberg probably would have made a better War of the Worlds in his younger days. It would have been an adventure. There’s nothing here as gloriously thrilling as the first time the T-Rex attacked in Jurassic Park. But now he takes himself so seriously as an Important Filmmaker that he’s turned a sci-fi classic into a brow-furrowingly grim piece of summer blockbuster. It feels like watching Indiana Jones and the Temple of Doom with all of the humor and whimsy drained out of it, and just the torture and heart-extraction scenes left in.

Since it’s about an attack on New York out of the clear blue, Spielberg doesn’t miss any opportunity to draw parallels to September 11th. It looks the same… and it feels the same… from the falling scraps of clothing to the wreckage of airplanes to the “Have you seen so-and-so?” signs. There’s no attempt at subtlety here. There are obvious references to contemporary quandaries about terrorism, a culture of fear, and the appropriate uses of violence in response to violence. There are quick quips about military occupations and joining the army that echo present-day debates about the Iraq war.

And yet, somehow he avoids turning this into a soapbox. Instead of preaching about current events, Spielberg seems to be offering War of the Worlds as a context in which to help us process our current fears and our recent nightmares. His alien invaders are not meant to represent Al Qaeda terrorists or American “shock and awe” tactics, even if they remind us of both. They’re just mean, violent, heartless invaders, made up of many classic movie-villain characteristics: menacing silhouettes, a thirst for blood, sounds that strike fear into your heart.

Still, it’s hard not to wonder if this isn’t closer to exploitation of recent events than exploration. Remember when, soon after 9/11, many predicted we’d never see this kind of thing served up as entertainment again?

I suppose it could have been worse — it could have been merely sensationalistic. But after unleashing two hours of big city chaos and destruction, it’s truly astonishing that Spielberg has once again blown the ending of an otherwise amazing film. With a lot of help from screenwriter David Koepp, he settles for an abrupt, predictable, sentimental, thoroughly unsatisfying conclusion. That feeling of 9/11 nausea and horror is a difficult thing to revisit, but a good storyteller could make something truly worthwhile out of it. There are so many meaningful directions it could have gone. How about exploring where we might find refuge or comfort when our military, our family members, and all of humankind lets us down? Spielberg can’t seem to find anything more than “Deadbeat dads, get your act together!”

Want to see a courageous, challenging film about humanity at the end of the world? Try last year’s apocalypse movie — Michael Haneke’s Time of the Wolf. Haneke’s film is a harrowing look at a world in which “the center did not hold,” but it’s also an uncompromising study of a society in chaos, people trying to learn who they can trust, who they can help, who can help them, and how to form a safe and productive community. And when it comes to offering comfort and perspective in a time of extraterrestrial siege, M. Night Shyamalan is the superior storyteller. Sure, Signs ended with a sentimental bit about faith… but God is a far stronger refuge to recommend than anything this film has to offer.

Having registered that complaint, I must admit — Spielberg avoids many of his common mistakes here. There are no goofy sidekicks or sermonizing asides. Things actually look lived-in, dusty, and real. With the exception of one painfully derivative scene that copies other blockbusters (Remember the “Eat me!” trick that concluded both Men in Black and Hellboy? Here it is again, as ho-hum as it was the first time!), it’s refreshing to see him insisting that human endeavor is not enough to save the world… just as Indiana Jones learned, once upon a time. In fact, “God in his wisdom” gets a fleeting bit of respect, just before the end credits. Thank the Almighty for that.

All in all, I’ll recommend War of the Worlds as an unforgettable special effects extravaganza, with some moments of pure cinematic genius… but I do so reluctantly, and with grave caution, due to the severity of the emotional ordeal. Spielberg’s conclusion may be faithful to Wells’ original text, but the ending arrives so suddenly that it’s as though the project suddenly ran out of the time and money necessary for a proper finish. War of the Worlds may be meaningful for some, but for this moviegoer, it felt like watching 100 minutes of the actual apocalypse and then switching to the climax of a sappy TV movie about parenting. Personally, I found the film difficult to stomach because of that, and I don’t plan to see it on the big screen again.