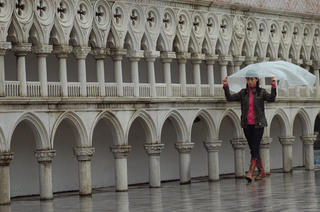 J. Robert Parks says he’s found one of the best films of the year.

A few days ago, my friend Garth asked what I was reviewing this week, and I replied “The World.” He was confused at first, and I hastened to add “The World” was the film’s name. “That’s a pretty broad title,” Garth joked. It is, and yet I’m not sure I could think of a better one.

The movie stars Zhao Tao as a young woman named Tao who works at the World Theme Park. The park is an actual (and bizarre) tourist attraction in Beijing that advertises, “See the world without leaving Beijing.” What visitors see are half- and quarter-scale replications of famous landmarks like the Leaning Tower of Pisa, Moscow’s Red Square, and even the twin towers of the World Trade Center. The fictional Tao is a dancer in the numerous cultural productions the park puts on, as well as a stand-in at various exhibits (she plays a flight attendant on a replica of a plane, at one point).

Tao is dating Taisheng, a young man who’s migrated from a rural province and who works as a security guard. Their acquaintances include other young people who work at the park (dancers and security guards mostly). The film follows them over the course of several months, as they meet new people, fall in love, try to switch jobs, and come to terms with what their lives are going to be like.

One of the many great aspects of the movie is how writer and director Zia Jhangke captures that restless feeling of being in your twenties: not married but dating, striving but not a success, working at jobs you plan on leaving, hanging out with friends but not sure they’ll be there for you next year. Tao’s story, with its struggles and joys, can be found on the streets of Chicago, Berlin, Tel Aviv, Tokyo, Buenos Aires, and any city where young people come to find their lives and reach their dreams. That The World reveals the details in that tale as well as the larger themes and lessons is testimony to the richness of the characters and their interactions.

The World is different from almost every movie, though, in its use of visual motifs and stunning cinematography. If you’ve ever wondered what film critics are talking about when they mention “film space,” The World is a perfect example. Zia often contrasts what’s happening in the foreground with what’s occurring in the background. A peasant with a bag full of pop bottles walks in front of the park’s replica of the Eiffel Tower. Tao and a migrant worker talk on a construction site while a plane takes off behind them. The movie takes advantage of its widescreen framing, often filming a conversation while also allowing us to see how other people are acting and reacting. But the film also shrinks that distance in an amazing sequence when a young couple, using video technology, take a magic carpet ride over the Paris landscape.

Zia also highlights foreground and background through powerful diagonal shots. One conversation in the park takes place while a group of tourists watch a dancing troupe in front of the Taj Mahal. The mix of banal and strange is amplified by cinematographer Yu Likwai’s amazing composition. And I can’t leave out the movie’s opening scene–an incredible Steadicam long-take through the subterranean hallways of the dancers’ dressing rooms.

World Park is a spectacular setting for a movie, but Zia Jhangke does so much more than just use it for visual flourish and ironic counterpoint. He integrates the theme of travel and culture into his characters’ lives. Taisheng and a number of his friends have migrated from the rural province of Shanxi to Beijing (just as Zia did) looking for work, and their contrast with the more sophisticated urban residents highlights one of China’s primary conflicts. As Tao and Taisheng struggle in their relationship, Taisheng meets a woman whose husband has left for France, and Tao strikes up a friendship with Anna, a Russian woman who’s come to dance at the park. Though they can’t speak each other’s language, they still communicate through hand gestures, facial expressions, and, in one moving scene, song.

There’s also a provocative scene when Tao’s ex-boyfriend comes to visit her. He has a passport to go to Mongolia, and Tao and Taisheng are envious, and so they take him to the train station, which functions as a metaphorical crossroads. Western audiences who use Mongolia as a stand-in for the last place on earth they’d like to visit will find that amusing, but it’s also a reminder that simple geography goes a long way toward determining how we see the world. When the average Chinese doesn’t have a passport and the government still attempts to control the flow of information, the park functions as a locus of longing to see and understand the outside world.

Yet, what do these characters and the others who come to the park learn from their experience? They take pictures in front of the scaled-down monuments, and they see lavish productions. Even those, though, are fuzzy facsimiles at best. At one point, Tao is assigned to play the “African” dancer, not because of any racial distinction but because there is no one darker than she. And how is the U.S. portrayed? America is a “green country,” a taped message at the park states. “They are not cultural snobs. They know how to create a show business culture.” Guilty as charged, but I can’t imagine any American who’d be happy with such a basic characterization. Of course, the average American’s view of the world is probably even less sophisticated. When MSNBC claims, without irony, to bring us up-to-date in 15 minutes and FOX News gives its tour of world events in 90 seconds and CNN’s entertainment coverage lasts longer than any foreign news that doesn’t involve bombs, is it no surprise that Americans still can’t pick out Iraq and Afghanistan on a globe? The fact that we don’t have our own world theme park is due only to the fact that we have Las Vegas instead.

In that sense The World is more than just one of the best movies of the year. It is, like all great foreign films, an absolutely necessary window onto a part of the world that we know little about and a timely reminder of why we must broaden our horizons. That it ends up showing us how much we have in common is icing on the cake.

37 responses to “J. Robert Parks Raves about "The World"”