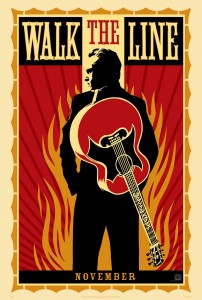 Imagine a film about the life of Tom Cruise that pretends that his marriage to Katie Holmes was a thrilling triumph, and all of that stuff about Nicole Kidman and Mimi Rogers was just an unfortunate prologue. Now imagine if that film only made a couple of sketchy, passing references to Scientology. Would you accept this film as the proper monument to Cruise?

Or better, imagine a film about the story of Bono and U2 without mention of the Bible study where the band members became close friends and began their career-long exploration of Christian faith. Imagine if that film avoided scenes of Bono in daily prayer. And how could we accept a film about Bono that said next-to-nothing about his journeys to Africa and his passion to bring help to the poor and the dying there?

James Mangold’s new film about the life of Johnny Cash, Walk the Line, burns, burns, burns with energy and explosive musical performances. Following the narrative arc of last year’s musical biopic Ray, screenwriter Gil Dennis brings spirit, energy, and humor to the story, with both eyes on Cash’s autobiographies. And the words ignite onscreen, fueled by volatile and Oscar-worthy turns by Joaquin Phoenix and Reese Witherspoon.

But oh, what a mangled mess Mangold has made of things.

First: Let’s give credit where credit is due. The biggest star of this show is T-Bone Burnett, who pulls off what may be his most accomplished work of film soundtracking so far, making these songs sound like they’re catching fire on Cash’s strings for the first time. You can sense the giddy fanboy enthusiasm Burnett and Mangold have for recreating such legendary hours as Cash’s audition for the famous producer Sam Phillips (played here by Dallas Roberts), which stands among the film’s most compelling and memorable moments, and Cash’s subsequent rise to fame on Sun Records, alongside such giants as Elvis, Orbison, and Jerry Lee Lewis. (While the actors playing these superstars deliver utterly unconvincing impersonations, they are properly presented as human beings rather than a pantheon of gods.)

Burnett’s work shines even brighter because, as the actors walk onto the musical platform he has built, they perform as if their careers depend upon it. This is a season in which huge personalities are coming to life in masterful performances — Truman Capote by Phillip Seymour Hoffman, Edward R. Murrow by David Strathairn, and now Phoenix and Witherspoon as Cash and his beloved June Carter. They’re every bit as successful, if not more so, than their colleagues.

Phoenix brilliantly develops Cash from a naïve young soldier to a battle scarred, reckless, rock-n-roll Tyrannosaurus Rex. No actor we’re familiar with could have done it better. He masters the walk, in which it appears Cash’s upper body is a size too large, creating something between a swagger and lurch. And, better than anyone might have guessed, Phoenix finds Cash’s deep drawl — a voice as distinct as John Wayne’s. His singing might convince some viewers that it’s actually a clever work of lip-synching to the master’s voice, but no… that’s Phoenix finding a whole new register. Years ago, in films like Signs and Gladiator, this intriguing actor stepped out of the shadow of his famous brother River, who played a country music singer in The Thing Called Love after owning the spotlight in My Own Private Idaho and Stand by Me. But now he’s made the move that will ensure him leading roles for years to come. He’s becoming more interesting all the time.

Witherspoon matches him, stride for stride, song for song, in her best performance yet. She turns Cash and Carter’s debates and duets into fiery, compelling sequences. Her accent never stumbles. They’re a joy to watch. And she makes the turbulence in June Carter’s heart convincing, flinching during romantic interludes as she keeps Cash’s wife and kids in her peripheral vision.

But as a telling of the story of Johnny Cash, Walk the Line is so misguided that it almost ignores the very thing that Cash himself says saved him from his weaknesses: the light of love and wisdom emanating not from June Carter, but from the Gospel… the message and the promises that brought him out of the darkness and saved him from himself.

Even worse, the film portrays Cash’s pursuit of Carter as belligerent, irresponsible, and disrespectful … which may have been the truth, but certainly should not be presented as romantic and excusable. After all, according to this movie, Cash’s hell-bent pursuit of Carter went on while he was still married to the suffering Vivian Liberto (Ginnifer Goodwin). The way Walk the Line is crafted, the audience is prompted to erupt in hallelujahs when the “happily ever after” banners fly, as June’s resolve finally collapses under the force of Cash’s egotistical appeals, and Cash’s family gets left in the dust.

Now — let me be clear — Mangold’s version may, indeed, stick to the true details of this chapter of Cash’s life. But we need more information. Given only these details, viewers who don’t know the whole story will come away with the wrong conclusions, learning the wrong lessons.

Alas, the filmmakers have forced Cash’s story into a mold that his life does not fit. They want us to take this as a story of two lovers “destined” to be together, a marriage that nothing could stop. The fact that Cash found “true love” with Vivian previously, and that they brought daughters into the world… these details become, in the film, just a complicated obstacle postponing Cash’s collision with Carter… the collision the audience is waiting to see. Thus, even though Mangold admirably avoids villainizing Vivian, his choices cannot help but incline the audience against her and the girls. They’re a technicality, the unfortunate casualties of Cash’s rise to fame.

In this regard, Mangold repeats the mistakes that Hackford made in Ray, who seemed think he could absolve Ray Charles of his sins by glorifying the man for his successes. Both directors admirably allow their central characters to exhibit shocking and dismaying behavior onscreen, to reveal their flaws without flinching… and that’s a good thing, because it’s the truth.. The two stories are so similar that it’s uncanny — from the way both Cash and Charles lost their beloved brothers during childhood to their eventual plunges into drug abuse. Mangold does a good job of showing us where Cash’s drive comes from, illustrating the abuse and contempt Cash suffered from his father well into his adult life. (Robert Patrick gives one of his finest performances as the insufferable Ray Cash.)

Still, the revelation of the source of Cash’s wounds should not justify, in our minds, the misbehaviors that Cash indulged so recklessly. Nor should his eventual success make up for the mistakes he leaves in his wake. But Mangold builds suspense all the way through the film, urging the audience to long for that eventual consummation of the illicit love growing between Cash and Carter. The fact that Cash finally kisses the principled girl he’s pursuing does not the selfishness that led him to that moment. And Vivian’s disinterest in Cash’s musical talent does not give us the right to root against their marriage. This film does not earn its happy ending.

And yet, audiences are proving content to accept this portrayal, surrendering to the gravity of this Hollywood love story rather than caring about conscience. Mangold has viewers cheering when the credits roll, as if they’ve somehow forgotten that Vivian is still out there, just out of the camera’s reach, with wounds that haven’t healed and issues that haven’t been resolved.

Nor do they seem to care that this romantic peak is reached by Cash’s continual disregard for June Carter’s own feelings and convictions. As portrayed, Cash conducts his courtship with the manipulative tactics of a monster, not a romantic hero. The crowd should remember that they also cheered, just a few minutes earlier, when June threw beer bottles at her drunken pursuer, outraged that he and his Neanderthal cronies could behave with such crude irresponsibility.

Again — these may, indeed, be the true details of Cash’s life. I am no expert on how this romance actually came about. But that does not mean we should celebrate this behavior. According to this interpretation, June’s love is not a flourish of grace that saves him, but a blessing Cash takes by force while he’s still indebted to another family.

Think of what men who are tempted to be unfaithful to their wives might learn from watching this version of the Johnny Cash story. It might affirm their belief that the other woman is actually a better option. It might suggest to them that, although their children will have broken hearts, the glory of a new romance, and the adventures it opens up, will make the damage worthwhile.

When Cash finally takes his talents into Folsom Prison for that legendary concert, thrilling the damaged souls there with some vibrant rock-and-roll shot through with gospel hope, Mangold misplaces his focus again, highlighting Cash’s defiance toward authority. And the subsequent text onscreen thrills us with the news that the recording of this concert became a bestseller.

No, no no… this is not the true triumph of Cash’s life. The real victory is expressed in the hope glimmering on the edges of Cash’s lyrics. In Folsom Prison, Cash could testify that, in spite of the darkness he brought upon himself, he was saved by a loving God who extended grace to him.

Cash’s story is not the Frank Sinatra story… that “he did it his way.” No. When Cash did it his way, he nearly destroyed himself. Don’t be fooled — Cash’s refusal to accept “no” for an answer was not what saved him from his flaws. Cash spells it out, plain as day, in his music and his own stories about his life, that he was ultimately rescued by the gravity of the gospel, by the way Christ prodded his conscience. Was June Carter one of the people who made a significant difference in his life and redemption? Yes. But to give her the glory shows a profound lack of vision.