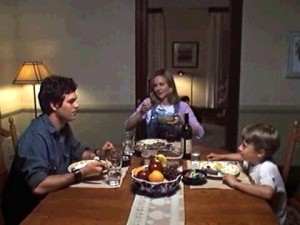 2007 Update: It’s been a few years since I’ve seen this 2000 film, and yet I remember moments from it so vividly. Terry and the boy taking a nature walk. The reverend informing Sammy that fornication is a sin. Sammy’s office confrontation with the boss. And yet, I wonder… what has become of Ken Lonergan, who wrote such a delicate, heartfelt screenplay? He was a co-writer on Gangs of New York, and then what?

Turning to the IMDB, I learn that he’s written and directed a drama called Margaret, starring Anna Paquin and Matt Damon. Where is this film?

Kenneth Lonergan’s You Can Count On Me is about a young woman trying to leave the past behind and live life on her own terms. And, of course, the past catches up with her.

This Sundance Grand Jury Prize-winning film is a small movie with a big heart. Lonergan, who also wrote the mediocre comedy Analyze This, strives for something more meaningful here, and the story sounds like it was based on personal experiences.

Set in Scottsville, a quaint small town in upstate New York, the film introduces us to Sammy (Laura Linney of The Exorcism of Emily Rose), a nervous, struggling single mother and bank worker. Sammy lives a seemingly simple life, trying her best to raise her son Rudy and to cope with a tyrannical new boss at the bank. But she is also haunted by the long-ago tragedy of her parents’ untimely death in a car accident.

When her reckless and wandering brother Terry (Mark Rufalo) shows up in Scottsville, their happy reunion takes an abrupt turn into a nasty argument over responsibility and money. The problems in both of their lives surge to the surface, and Sammy and Terry’s lives spiral downward into chaos until they hit bottom and learn something that just might help them back to some semblance, order, and peace.

Laura Linney plays Sammy with such confidence that it makes you wonder how much she actually identifies with the character. Sammy’s just trying to set a good example for her son, even as her own loneliness causes her to stumble into foolish and potentially disastrous errors in judgment. Linney’s performance is a dramatic pendulum, swinging from moral outrage to moral lapses, with amusing and understandable motivations for both. She makes us nervous with the tightwire she walks, but we never stop caring for her all the same.

Rory Culkin (fortunately starting his career out on something more admirable than a goofy Home Alone flick) gives a delicate, quiet performance as Rudy, Sammy’s eight-year-old son, who is watching grownups carefully and learning from what he sees.

Newcomer Mark Ruffalo… give the man an Oscar nomination… makes a strong first impression as Terry, Sammy’s brother, who has drifted around the country with a feeble grasp on order and responsibility, returning home only to occasionally borrow money from his hardworking sister. Ruffalo’s halting speech reveals a man who is poorly educated, lonely, and still a frightened little boy under the unshaven good looks and the cocky Brando-like machismo.

Matthew Broderick and Lonergan himself contribute memorable supporting work as Sammy’s boyfriend and the neighborhood cleric.

In a season of showy, aggressive films, You Can Count On Me is a modest, quiet work but its virtues are profound. (And apparently, audiences and critics appreciate it: the film won the Sundance Grand Jury Prize and the Waldo Salt Screenwriting Award.) Lonergan’s writing is exceptionally honest, sensitive, and revealing. The camerawork isn’t showy; it’s just what it needs to be, standing back and letting us watch, never drawing attention to itself. And the music is equally appropriate, featuring soft country flourishes by Steve Earle.

Lonergan avoids the faults of so many other contemporary American storytellers by refusing to cast his characters in a judgmental light, giving each one just enough dignity to make him or her convincing and sympathetic. I believed in the characters, I winced when they stumbled, and I was moved when they learned and grew. I was especially pleased to see a Christian character portrayed without evident prejudice on the part of the director; he seemed as decent, as sincere, as real as the others, and he also seemed to have some wisdom to impart. In this way, Lonergan reveals himself to be more of an artist than an entertainer.

January 9, 2007
Join us for the "Through a Screen Darkly" release party.
Next Post