A Very Great Loss in the World of the Christian Imagination 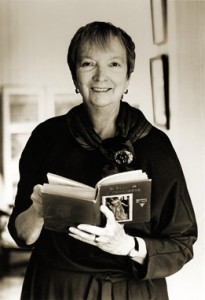 Madeleine L’Engle is one of the artists whose views and work have inspired me the most. As I was writing Auralia’s Colors, I frequently revisited her thoughts on the power of art. She referred to great artmaking as “collaboration with God.”

On Thursday night, at the age of 88, Madeleine L’Engle made her journey through a wrinkle in time and space.

And I feel that I lost a grandmother and a mentor. Most of that guidance came through her nonfiction work — Walking on Water, The Rock That is Higher — although she certainly manifested what she believed about faith and imagination in great novels like A Wrinkle in Time and A Swiftly Tilting Planet.

I met her once when I was a student at Seattle Pacific University. I sat with her after her presentation, and I told her what Walking on Water meant to me, and how I wanted to follow in her footsteps, and the footsteps of Tolkien, as a storyteller. She was so inspiring and gracious to that audacious youngster. And she was so enamoured of Seattle and its view of Mt. Rainier, which often seems to hover above the horizon as the layers of low clouds blend in with the sky. “I love it here,” she gushed. “Yours is the only place I’ve ever seen that has its own flying mountain.”

Writing about her enduring affection for children’s stories, she insisted that her age was not an isolated chronological statistic, but only the most recent addition of a year to her life: ‚ÄúI am also four, and twelve, and fifteen, and twenty-three, and thirty-one, and forty-five and . . . and . . . and . . .‚Äù

May God continue to bless her work for ages to come. She’s one of the few who embraced the freedom that Christ gives us in art and imagination, and as a result, her work has a reach and influence that so many others don’t.

If you haven’t read it, pick up a copy of Walking on Water, L’Engle’s reflections on faith and art, and discover one of the richest treasures in the library of the Christian imagination.

Much, much more about her to come. Stay tuned.

UPDATE #1: Here is Christianity Today’s report, along with a previously published 1979 interview with L’Engle.

Why do you find the form of a children’s book compatible for what you want to say?

The fantasies are my theology. In a way, I’m going to say things in my new book, A Ring of Endless Light, that I said in Planet. People who can’t understand the earlier book may understand this one. But I couldn’t write Ring if I hadn’t first written Planet.

Theologically, I suppose that there is an openness and an aliveness to many young people that ceases in adulthood. Jesus said, “I thank thee Father of heaven and earth that you have revealed these things to children and hidden them from the wise.” Maybe I’m still trying to grow up myself.

The act of honest work‚Äîwould you call it a form of worship?

Yes. I’ve called it a form of prayer before, but I think prayer is largely worship. Prayer may be work. Adam worked in the garden. His work was his play. For me that’s true. I think the awful thing is that for many people their work is drudgery‚Äîneither a gift, nor a vocation. Hugh and I are both lucky that we do work we love.

Would you say that art is religious?

Whether artists are aware of it or not, art is always incarnational. True art is Christian. Sometimes I know that my work at its best keeps me from straying, keeps my faith intact. Someone once asked me if the fact that I was a Christian affected the way I work. I said no, but the way I work affects my Christianity.

Are you a universalist?

UPDATE #2: Here is a link to the biography at her official website. Here is the acceptance speech Madeleine gave upon receiving the Newberry Award in 1963. And look at the list of honors and awards. Want to read more interviews? Here you go.

Thanks to Glenn McCarty for sharing the news with me. 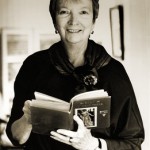