This review was originally published at Christianity Today Movies in March of 2007.

Jaws introduced us to the shark-cam. From the shark’s perspective, we saw the vulnerable legs of that oblivious swimmer just before the deadly strike. Then, blood stained the water.

David Fincher’s new film Zodiac, based on a murder mystery that began in 1969 and continues today, opens with “the incoming mail cam.” We’re drawn into the offices of The San Francisco Chronicle, moving along with a letter penned by a murderer who calls himself “the Zodiac.” And when the letter is discovered, fear stains the air … and spreads.

Okay, so the shot isn’t as immediately terrifying as that moment in Jaws. But gradually, the Zodiac’s letters — which often include puzzling cryptograms, and claim responsibility for brutal murders — inspire a citywide terror. As the cops, investigators, and journalists discuss strategies for catching this shark, they seem every bit as frantic and flustered as the men who hunted the sea monster in Spielberg’s famous thriller.

Zodiac‘s screenplay is as labyrinthine as Oliver Stone’s JFK, but Fincher never lets things become a preachy or ponderous commentary. Screenwriter James Vanderbilt took the wealth of information compiled by Robert Graysmith and wove facts, testimonies, and terrifying events into a screenplay that snaps, crackles, and pops. Fincher focuses on recreating these events with meticulous visual detail. He recreates the period with such precision that Zodiac looks like it might have been made at the same time as All the President’s Men and The Conversation, films that clearly influenced Fincher’s work. It’s hard to believe such a studious work would come from the man who crafted such sensual thrillers as Se7en and Fight Club.

But when the killer strikes, Fincher fans will feel the same paralyzing fear that the director brought to Panic Room. And this time, he doesn’t turn away from the bloodshed. This isn’t Se7en. We don’t arrive on the crime scene after the fact. No, this time he brings the camera in so close to the victims as the killing blows are struck that many will turn away in horror.

Moviegoers should consider ahead of time whether or not they want to witness these depictions of senseless brutality. But it’s easy to see why Fincher includes them. He wants us to get angry. He wants us to share the maddening obsession of those who try to track this sadistic monster. He wants us to feel their frustration when the clues lead nowhere, theories fall apart, and trails go cold.

Hannibal Lecter, Keyser Söze, and Se7en‘s John Doe scared us with intelligence. But the Zodiac’s messages are far from eloquent—he’s not a genius, he’s just a bloodthirsty egomaniac. Like Jack the Ripper, his obsession with becoming a criminal celebrity should make him an easy catch. What makes him scary is his ghostlike ability to remain untouchable and enigmatic.

His homemade PR campaign seems like a boilerplate for today’s viral marketing efforts. He has an insignia as catchy as Nike or Target; his messages are interactive, challenging us with puzzles; and his messages pop up when you least expect them. And, as in advertising, the more he claims about himself, the more his audience begins to doubt him. Did the Zodiac actually commit all of the murders he claimed? Or did he only carry out a few, but convince us of the rest through his power of persuasion?

The killer becomes such a powerful presence that the film’s main characters seem pale by comparison, drained by the vampire. The Chronicle‘s crime reporter Paul Avery (Robert Downey Jr.) and cartoonist Robert Graysmith (Jake Gyllenhaal) give us a good sense of how the Zodiac disrupted everyday procedure. The editors’ debate about whether to indulge the killer’s exhibitionist ambitions and publish his letters for the public, or to refuse and test his temper, is the film’s most compelling ethical dilemma.

Homicide inspector Dave Toschi (Mark Ruffalo) and his wingman William Armstrong (Anthony Edwards) acquaint us with the corridors of the San Francisco Police Department. We feel their pain as the laws fail to empower them to make an arrest. And eventually, they begin to succumb to despair as they revisit cold crime scenes, like the intersection of Washington and Cherry where a murder happened in front of witnesses, wondering if they’ll ever find that clue… the one that will solve it all. Before long, they’re aggravated by movies about the very crime they cannot solve.

The actors do an impressive job of developing convincing characters without distracting us from the mystery. Gyllenhaal’s performance is a more adult version of his haunted Donnie Darko character. His is face drawn and sad, his large eyes staring half at the details and half into nightmare, he wanders into a downward spiral, longing to find that missing piece so that he can rest.

Ruffalo is equally engaging in his most demanding role since You Can Count on Me. He makes Toschi a thoughtful cop who internalizes his rage, where other actors would have wanted to dramatize this character’s desperation and disintegration.

Downey Jr., on the other hand, can’t help but ham it up as he always does. And he gives the film some much-needed humor, even if he is a bit out of step with a rather sullen supporting cast, which includes Donal Logue and Elias Koteas as weatherbeaten cops. Chloe Sevigny does what she can with the thankless role of Graysmith’s increasingly frustrated wife. But the film is almost stolen by John Carroll Lynch (better known as Norm Gunderson of Fargo), who plays a creepy child molester.

If the film has a weakness, it’s the predictable story of Graysmith’s family troubles. The more the movie zeroes in on his solitary quest to catch a killer, the more it steps into the territory of conventional thrillers.

Eventually, when Graysmith emerges as the closest thing to a central character, we see that families are being destroyed by the Zodiac’s tactics as well.

Nevertheless, Zodiac remains riveting for its entire 154 minutes. We’re led in a mad dash through a maze of forks in the road, dead-ends, and strange new paths that lead us right back to where we started, until we’re dizzy. Clues are strewn like candy all along the way, and they prove to be just as empty, just as useless.

Zodiac is sure to cause complaints that it’s just a parade of information that leads to nothing at all. But dig deeper, and you’ll find a story about the elusive nature of evil in a world that thinks information, knowledge, and technology will eventually solve our problems.

Dig even deeper, and you’ll feel the vibrations of 9/11. While Toschi and Graysmith panic and plot, applying all their powers of reason, technology, and information to try and eliminate the threat, it’s hard to miss the implications. The Zodiac slips through every net, just like that present-day criminal mastermind who taunts America with video appearances instead of writing letters. After all of the post-9/11 investigations, manhunts, arrests, theories, and invasions, the threat is still out there. Our government, law enforcement agencies, and media have failed to find a solution. We’ve witnessed an epidemic of fear and the escalation of a worldwide conflict.

Reason and information are certainly helpful in bringing criminals to justice, but humankind will never muster enough resources to solve the problem of evil. That kind of salvation can only come by grace. But no one looks up in this town.

Still, Fincher does give us a few glimpses of the city from above. Whatever he intended, it’s just enough to make us wonder what God sees as he watches us scurry about in our futile efforts to solve problems on our own, as he waits for us to remember how much we need him.

But even if we believe that God will someday right all wrongs and heal all wounds, Zodiac still leaves us with chilling questions. If he is benevolent and all-powerful, why does he allow such acts of cruelty? It’s the kind of conundrum that can challenge a person’s faith. The answer lies buried in a history of sin, in the glaciers of an ice age. We can only hope, as the earth groans, that all will come clear someday in the light and heat of a just and merciful God. 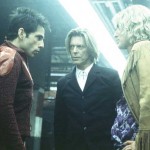