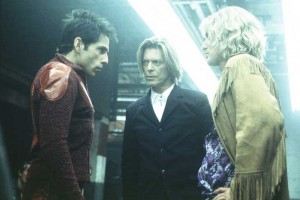 2007 UPDATE: It’s been more than five years since Zoolander, and the movie still holds up. Glancing back over my original review, I still feel the same way about it. It’s a hoot and a holler, and well worth revisiting. It’s a shame Stiller hasn’t done anything more in this vein…

It may seem strange to use the word “discernment” when talking about a Ben Stiller comedy.

But good satire has always exaggerated the good and the bad of reality, allowing us to discern the differences between wisdom and folly more clearly. Even children laugh at fun-house mirrors. We can’t help but laugh when we see reality deliberately distorted in representation, and our reaction indicates we know the difference between what is real and what is fake.

Satires come in many shapes and sizes. Some are cartoony and obvious, blowing things way out of proportion; others are subtle, twisting the reality just enough to make you wince. Either way, watching a good satire can be a rewarding experience. you with better discernment of reality, in which things aren’t so clear. Good satire is like a health-food dessert — you’re enjoying it so much that you don’t even realize it’s good for you.

Zoolander, writer/director/actor Ben Stiller’s latest comedy, is a light-hearted, energetic, and outrageous romp through a grossly exaggerated representation of the fashion world. In this spoof, male models are the focus of the fashion industry, which strikes us as funny because we can all probably name a supermodel woman or two (or ten). As we follow the rivalry of two supermodel men, Derek Zoolander (Stiller) and Hansel (Owen Wilson), we’re treated to a long list of celebrity behaviors being delightfully skewered:

The notorious egos and sorely lacking intellects of spoiled-brat celebrities are severely spoofed. Our hero not only struggles with simple pronunciation, but is also afflicted by a strange handicap… he doesn’t know how to turn left.

We’ve all seen arrogant and often poorly informed celebrities try to make themselves feel important by attaching themselves to political or social action; Zoolander underlines the oxymoron of “supermodel” and “activist” by impersonating a skin-deep glamour boy who wants to help the needy by opening the “Derek Zoolander Center for Children Who Don’t Read Good.”

Many of these highlighted indulgences and misbehavior may offend sensitive viewers, especially if they have experience with such failings. And the crass sexual jokes get somewhat out of hand. But I applauded the entire film. Stiller does not ignore the widely recognized sins of the rich and famous; he blows them up like balloon animals so we can see just how ridiculous they really are.

The plot? What plot? The string of events in Zoolander is preposterous and impossible to take seriously. It is merely a structure that allows Stiller to fool around with a wide range of issues and sad truths, and sometimes just have fun.

Derek, in a ludicrous send-up of meaningless pop culture award ceremonies, is up against his rival, a bone-headed blonde named Hansel, for the Male Model of the Year award. What he doesn’t know is that the outcome of the award ceremony will result in his being chosen to be brainwashed by sinister villains, led by a wicked fashion mogul named Jacobi “Jacko” Mugatu (the shameless Will Ferrell, in an inspired turn.) Mugatu’s fashion empire is threatened by the new and ethical prime minister of Malaysia, because Mugatu’s textile production depends upon child labor in third-world countries. He hypnotizes Derek and trains him to be an undercover assassin who will throw Malaysia back into turmoil and make the world safe for fashion again.

Sound completely stupid? It is. But the movie doesn’t ask you to take anything seriously. It’s meant to entertain, surprise, and make you laugh. And you just may well return to the real world with a better sense of how responsive we are to such false advertising, to such ridiculous trends. You might pause during the next fashion advertisement and see more clearly how much ego, attitude, and emptiness are on display. It might make you ask yourself whether the shoes you’re wearing were made at the cost of suffering somewhere else.

Or it might just make you laugh. But even that is a valuable experience, especially these days, when 9 out of 10 comedies earn their laughs by mean-spiritedness and lazy locker-room humor. Zoolander doesn’t have a mean-spirited bone in its body. It’s a movie about the excesses of celebrity, but it’s made by a celebrity, and the advantage of Stiller’s insider perspective is that he is able to separate the sinner from the sin. He is able to demonstrate contempt for the folly of the Industry of Image even as he shows affection for the people that are in it.

Stiller is enjoying immense success, having starred in a string of comedy hits including There’s Something About Mary and Meet the Parents. He knows about celebrity. And he comes from a family of entertainers, many of whom are in the film. His father Jerry Stiller has a significant role, his mother Anne Meara plays a protester at a rally, and Ben’s own wife, Christine Taylor, plays his love interest. It’s clear that the cast enjoyed working together; everyone in the movie cooperate like good friends at a grand costume party, and their enthusiasm is contagious. I haven’t sat in an audience that laughed so loud and so long in a good while.

Dozens of celebrities appear in cameos, and almost all of them are poking fun at their own mistakes, their own indulgences. Even Winona Ryder, who has made more of a name for herself in shoplifting and celebrity romance gossip than she has for her onscreen performances in the last few years, shows up trying to romance Derek Zoolander, the world’s dumbest hero. Another star shows up as the “informant,” an expert in conspiracy theories; it’s perfect casting, and the actor gives such a fun, humble performance that I don’t dare spoil it for you. Even Billy Zane’s cameo is memorable. Best of all, when the rival models challenge each other to a duel, a runway “walk-off”, yet another cameo occurs: both audiences I sat with burst into applause at the first appearance of the man who will judge the contest

Once upon a time, Steve Martin gave us outrageous comedies that made us laugh without giving us any reason to feel guilty about it. Ben Stiller here demonstrates a flair for the same thing. I can only hope we see more, and better, comedies with this signature on them. I laughed until it hurt watching Zoolander… and then I went back to laugh at it again, and again.

September 12, 2007
"Through a Screen Darkly" at Fuller Theological Seminary
Next Post

September 13, 2007 Zodiac (2007)
Browse Our Archives
get the latest from
Entertainment
Sign up for our newsletter
POPULAR AT PATHEOS Entertainment
1