A Dark Day for Seattle Music

That abrupt, last thump was a solo set from David Bazan (formerly of Pedro the Lion).

I’ve lost track of how many concerts I’ve enjoyed at the Croc. So many memories: Sam Phillips, T-Bone Burnett, Over the Rhine, They Might Be Giants, not to mention that full day of waiting there and eating and drinking on a tip that R.E.M. was going to play a surprise live show (they didn’t that night, but did a few months later)…

This is just awful.

The Crocodile Cafe, a legendary Seattle rock club where many local up-and-comers played before launching into the national spotlight, has closed its doors, said Eli Anderson, the club’s booking agent.

The Belltown venue, at Second Avenue and Blanchard Street, shut down abruptly this weekend after more than 15 years ‚Äî apparently leaving behind a legacy that stretched from Nirvana to Death Cab for Cutie.

Anderson said he received the news in a voice mail from owner Stephanie Dorgan on Sunday.

“She said ‘I have to close the Crocodile immediately,’ ” Anderson said Monday, adding that the locks had been changed. Anderson and other Croc staffers were permitted to go to the club Monday afternoon to pick up personal belongings, he said.

Chairs were up on the tables and countertops at the locked club, though the club is normally dark on Mondays. Efforts to confirm the closing with Dorgan were fruitless; calls to her at the club were not returned.

“Everybody that got fired [Sunday] got together and had drinks,” Anderson said. One of his former co-workers heard the club could reopen under new ownership. “But from what I was told, it sounded permanent.”

The news came as a shock to many in Seattle’s rock music circle.

“I think it’s a blow to the scene,” said David Meinert, a local promoter and publicist, “part of the side effect of the mayor’s downtown development plan, which seems to have no room for live music in it. … Keeping a venue open as long as the Croc has been, through all the changes the music scene has been through, is a very difficult job. I feel for any club owner trying to make it in Seattle.”

Local musician Chris Martin, a guitarist in local rock band Kinski, called the Crocodile Cafe “the most exciting club to play in town.”

“There was something about walking out on that stage that we always found really exhilarating,” he said. His band had its record-release shows at the club, he said, adding the sound in the room was “always top notch.”

John Richards, a DJ for KEXP who met his wife at the club, said he was devastated by the news.

“It’s one of the landmarks of music in this city … that place is Seattle music,” Richards said.

The Crocodile Cafe was opened in 1991 by attorney-turned-businesswoman Dorgan and quickly became a local music-scene fixture.

It opened that spring, just in time to ride the grunge wave. But it had a hearty life after the demise of grunge, and the Crocodile helped launch the likes of Modest Mouse and Death Cab.

Nirvana, Sunny Day Real Estate, Band of Horses and just about every other Seattle band that has gone on to national prominence played the Crocodile. It was also a prime venue for touring acts, landing the likes of the Strokes, Sparklehorse, Badly Drawn Boy and Cheap Trick.

Dorgan later married Peter Buck, the R.E.M. guitarist, who became a partner in the Crocodile, and often played there with his other band, the Minus 5. Dorgan and Buck divorced last year. 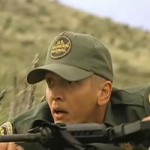 December 18, 2007 Peter Jackson to Make "The Hobbit"
Recent Comments
3 Comments | Leave a Comment
Browse Our Archives
get the latest from
Entertainment
Sign up for our newsletter
POPULAR AT PATHEOS Entertainment
1

3 responses to “A Dark Day for Seattle Music”