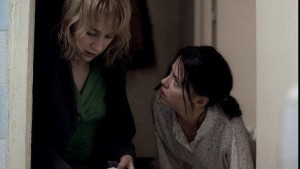 This is a revised version of a capsule review that first appeared in a recap of favorite 2008 films, published at Image:

Gabriela (Laura Vasiliu) seeks an abortion, which is illegal in her part of the world. This is Romania, and it’s 1987. She can’t just purchase whatever she pleases. If she wants quality in anything from cigarettes to medical attention, she needs to work around the restrictions of Nicolae Ceauşescu’s communist regime.

Gabriela has a resourceful friend in Otilia (Anamaria Marinca), who finds an abortionist and sets up the appointment. But they’re in the wilderness now, beyond the eyes and reach of the law. Who can promise them safety? When their gamble goes bad, and they end up caught in the clutches of a monster, they will have to make painful sacrifices in order to escape.

It sounds like the setup to one of those lurid horror films that seem to appear every week on American movie screens, right? But it isn’t. This is one of those rare works of horror that demands to be taken seriously.

Mungiu’s goal isn’t just to scare you. He’s telling a story that exposes not only the evils perpetuated by a Communist regime, but the evils awakened by consumerism, and by those who do not question the impulses they indulge. The film surpasses other scary movies by turning our expectations upside down. Instead of luring us into a typical scenario where dumb but sympathetic characters fall into the clutches of a villain and then seek to escape, we end up as troubled by the nature of Gabriela and Otilia’s friendship as we are by the behavior of the figure who looks most like a conventional villain.

What kind of friendship is this, anyway? Is Otilia’s faithfulness really so honorable? Is the capitalism that these young women covet really going to make them happy? Which are more destructive: Oppression and limitations, or the choices we would make if we were given greater freedoms?

In the film’s concluding scene, we’re given an unsettling picture of what can happen when the sacred mystery of life is, for a price, cut to pieces for our own satisfaction. (Much to my bewilderment, Roger Ebert seems to have completely overlooked the significance of the film’s closing scene in his own review.)

Much of the power of Cristian Mungiu’s film comes from his long, unflinching takes of human beings in states of emotional turmoil. This allows his actors to truly perform, and this cast is up to the task, speaking to us with so much more than mere dialogue.

Mungiu’s impressive patience allows us to settle into particular times and places for long stretches of time, so that we feel the weight of silences, share the discomfort of the characters, and find our own way through complicated emotional circumstances. By eschewing conventional plot twists or stylistic flourishes, he creates scenarios as unnervingly unpredictable as real life. This transforms a story that could have been a simple narrative about friends trying to cope with oppression into something much more complicated and true.

Haunted and distraught about the film’s bleak vision, I shared my feelings with a Romanian exchange student. He answered with furious affirmation: “This film is the truth about Romania under Communism. Ask my mother. Ask my father. It’s a psychology that very familiar to them.”

That unflinching vision of the depravity in human nature is likely to haunt audiences for a long time after the credits roll. I suspect that is why the film earned the Palme d’Or at the Cannes Film Festival in 2007, as well as the Best Film and Best Director honors at the European Film Awards.