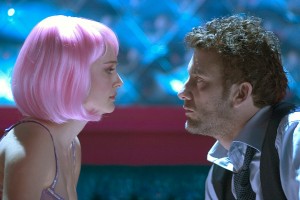 Closer, the new film from Mike Nichols (Who’s Afraid of Virginia Woolf?, The Graduate), has a lot in common with the “smoker’s lung” billboard.

You know the one — there’s a cigarette in the left frame, and a blackened, diseased lung on the right. It’s a troubling image. You’re driving along sipping coffee or tea, you see the picture, and you choke. Nobody wants to see such ugliness. But it works. Sometimes. Especially for young people. That nauseating image of rotten tissue is enough to make a few of them say, “Not in my chest cavity!” It exposes the glamour of cigarettes as a lie, a short-term, feel-good rush that leads to long-term heartache.

Closer works like that. But it’s not about smoking — it’s about unfaithfulness. And instead of showing us ruined lungs, it exposes ruined hearts. Instead of disintegrating organs, we see souls sickened from dishonesty, anger, hate, emotional violence, grief, loss, and loneliness.

How interesting that Closer arrives while Bill Condon’s film Kinsey is still in theatres. Kinsey celebrates the “scientist” who told the 1960s to stop thinking about sex in a restrictive moral framework, and to enjoy it in any way we please. After all, we’re animals, and sex is “animal behavior.” Closer contradicts this, suggesting that when people behave like animals, adhering only to their base desires and self-centered impulses instead of to conscience, morality, and promises, they end up lacking the blessings that human beings have the capability to enjoy. Closer — like We Don’t Live Here Anymore, 2004’s other “adultery film” — demonstrates that saying “It feels good, so it must be okay” leads to a relentless, heart-hardening search for satisfaction.

Adapted from Patrick Marber’s play, Closer deals with themes as old as the story of David’s malevolent conspiracy to take Bathsheba from her husband. Like Adam and Eve, the characters want whatever is out-of-bounds, and when they transgress, they tear the seams of their own lives and the lives of others.

Dan (Jude Law), a British obituary writer, is “in love” with Alice (Natalie Portman), an American dancing at a London strip club. Their eyes first met a few fluttering heartbeats before a truck knocked her flat, and Dan hurried her to the hospital — what a noble hero! — for some band-aids. Charmed, Alice flirts with him by polishing his glasses and performing other small revisions. Similarly, Dan writes a novel in which he “revises” Alice into a fictional character of his own fantasies. The reality, however, is sure to disappoint them in the end.

Riding high on his novel’s success, Dan seizes an opportunity to seduce a photographer named Anna (Julia Roberts) when their first meeting generates romantic sparks. After an initial kiss, Anna’s conscience prods her to break free of him; she knows about Alice. But it’s not long before Alice’s heart is broken by the truth, and her trust in Dan is broken. Ever opportunistic, Anna snaps a photograph of Alice in her ruined state. With that, the relational disintegration begins in earnest.

Who’s the fourth player? A dermatologist named Larry (Gosford Park‘s Clive Owen), who spends his professional time giving prescriptions and his spare time surfing the Web for pornography and cybersex. Online, he unwittingly becomes the pawn of a practical joker — Dan — who uses him to make Anna pay for her rejection. Dan doesn’t realize he’ll become the butt of his own joke. (Do Anna and Larry actually fall in love? Or is Anna merely working out a counter-revenge ploy against Dan?) Before you know it, two of them are married, adultery’s close behind, one is paying for the indecent exposure of another, and they’re all angrier, emptier, and placing the blame on everyone but themselves.

It’s an ugly film … like that picture of the ugly lung, but withoutthe picture of the cigarette. We see the disease, but we have to interpret for ourselves the source of the problem. Closer isn’t just sensationalized misbehavior; it’s an earnest search for the root of unhappiness in the lives of four very different, yet similarly depraved people. It doesn’t condone the sin; it exposes it.

Interpretations will vary. But any close consideration of these characters should lead viewers to the conclusion that — for all of their talk about “love” (and there is a lot of talk) — love is the very thing that’s missing. They prioritize the thrill of “falling in love” over the work of “staying in love,” and thus they can’t even guess at the rewards of mature love, a love that remains steadfast even when disappointed, even when fickle feelings falter.

Moviegoers and even critics aren’t always interested in interpreting a movie, however. They’ll line up to see Law, Roberts, Owen, and Portman in steamy, intimate situations, and they’ll discuss possible Oscar nominations. Critics will praise the film for its audacity and intensity. Like Closer’s characters, many will be disappointed, and some may even “break up” with the film halfway through. Most will fail to notice (or avoid acknowledging) the troubling truth it reveals. Like the scene in which arts patrons praise Anna’s photograph of the heartbroken Alice, they will say “marvelous” and “compelling,” whiling ignoring the truth the image communicates.

The film earns some of that praise. Roberts makes Anna subtle, complicated, and burdened with conscience. Law (in his fourth of six 2004 performances!) turns Dan into an egotistical monster with the emotional maturity of spoiled child. Most famous for her monotone performance in the Star Wars prequels, Natalie Portman revels in the role of Alice, who conceals her dying heart behind a façade of carefree sexuality; this ensures Portman will hereafter be treated as a “serious actor”—and as a sex object.

Nevertheless, Nichols and Farber have transferred the play to the screen without imagination. The non-stop dialogue is better suited to the stage. In the realism of a film, the characters seem to speak too intelligently, at times too poetically, and sometimes just too much. “Talky” films have always been Nichols’ specialty, from Who’s Afraid of Virginia Woolf? to Carnal Knowledge to his recent, award-winning HBO films. But Closer lacks the thoughtfulness of Wit, the situational comedy of The Graduate, the exaggerated personalities of Primary Colors and The Birdcage, and the sympathetic characters of Angels in America. The wordy wickedness becomes wearying.

Closer isn’t a film I’d eagerly recommend, just as you wouldn’t want to pay for the privilege of examining that diseased smoker’s lung. Dan, Alice, Larry, and Anna behave so badly, many viewers will ask (to borrow another Nichols film title) “What Planet Are You From?” Here’s a heavy caution: Scenes set in a strip club may lead some viewers into dangerous thoughts (even though these scenes, taken in context, reveal the emptiness and sickness of loose sexual behavior). Those of you who want to avoid foul-mouthed characters—steer clear of this film. The R-rated language employs every obscenity and expletive in the book, loudly and viciously, several times over. Divided lovers interrogate each other with more graphic specificity than we heard in the interrogation of President Clinton.

But just as we should be glad that the smoker’s lungs are posted on that billboard, so we should be glad that this film speaks the messy truth to those who do see it. It is not a film to be flatly condemned or disregarded. For those deceived by the seductive glamour of tabloid personalities, this could be a nasty wake-up call. It might make people hesitate before “hooking up” over the Internet or fooling around behind their spouse’s back. Like its literary cousin, Dangerous Liaisons, it’s not pleasant, it’s not “clean,” but it is, like it or not, true.

Closer could have brought us “closer” to apprehension of the whole truth. It could have given us an example of integrity. That’s where post-viewing discussion could be valuable for discerning viewers. But the consequences of wrongdoing serve as a strong signpost, directing us away from danger. In the song “A Man and a Woman,” one of the tracks on U2’s new album, Bono sings, “I could never take a chance / of losing love to find romance.” These characters take that chance. And they pay the price.