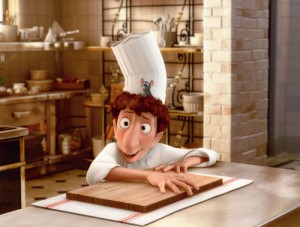 My review of Ratatouille was originally published in June 2007 at Christianity Today Movies.

Attention, parents, kids, anybody who appreciates good movies and great food!Ratatouille is a feast so fantastic you’ll go running back for seconds. And if you pay close attention, you’ll also see that it’s a film that tells two great stories at the same time.

The first story is what you’ll see on the big screen. And the second—at least the way I see it—is a more subtle, almost allegorical re-telling of what really happened to one of the 20th century’s most-loved and enduring pop culture icons …. Walt Disney himself.

Once upon a time, there was an adventurous French chef named Auguste Gusteau (think Walt Disney) whose Paris kitchen (think Disney studios) was famous for awe-inspiring cuisine (Disney’s classic animated features, like Pinocchio).

Gusteau knew his strengths and focused on them, serving up heaping plates of excellence to the delight of the customers at his self-titled restaurant. Gusteau’s and its namesake became legendary worldwide.

But then, for one reason or another, the quality of his work began to falter. He died, and his successors (think …. Michael Eisner?) sold out, stamping the Gusteau (Disney) name on all manner of mediocrity. The master’s face and name eventually flew like a banner over mediocre microwave meals (frivolous features like Pocahontas, and disposable straight-to-video sequels to Disney classics). And eventually his name represented fare that seemed completely unrelated to his legacy (The Muppets?).

And while the masses seemed content to choke down anything contained in a Gusteau can (or released on a Disney label), it looked like Gusteau’s name would become synonymous with trash.

Enter Remy, a little rat with a nose for excellence and a passion for cooking. (Enter director Brad Bird, the brilliant storyteller and filmmaker behind The Iron Giant and The Incredibles.)

Remy would never, in normal circumstances, be allowed into the great Gusteau’s kitchen. He’s a rat after all, likely to be exterminated before his extraordinary talent wins the attention it deserves. (Bird’s Iron Giant was badly botched by Warner Brothers, who didn’t know that they had a classic on their hands. Thus it never got the box office it deserved.)

But then, Remy meets Linguini (voiced by Lou Romano), a gawky, insecure fellow who works as the kitchen garbage boy. He couldn’t cook a microwave dinner if he tried. And yet, when Remy climbs beneath Linguini’s chef hat and begins to direct Linguini around the kitchen by pulling on his hair—presto! Or should I say, Pesto?

Can a little guy with a big imagination step into that famous kitchen and restore it to its former glory? Yes. (And yes!)

With Remy’s creative genius and Linguini’s access to the pots, pans, and ingredients, a new Gusteau masterpiece is just a matter of time. (In the same way, Pixar’s powerful chemistry has produced a string of masterpieces …. delivered with the Disney label: A Bug’s Life, Toy Story 2, Monsters Inc., Finding Nemo, The Incredibles, and Cars.)

The story then begins to resemble the Coen Brothers’ Hudsucker Proxy. By underestimating a simpleton who works at the lowest level, Skinner the wicked franchise-master (voiced brilliantly by Ian “Bilbo Baggins” Holm) unwittingly jeopardizes his moneymaking empire.

When the simpleton serves up a super soup, it seems that the Paris spotlight just might shine on Gusteau’s again. It all depends on the reaction of the city’s most demanding food critic, Anton Ego, who looks down his nose at almost everything. And with his nose, that’s a very long way indeed.

While it seems inappropriate to equate Brad Bird with a rat, Ratatouille clearly reflects what has happened since Pixar arrived in the Disney kitchen (for more details, see this book and/or this). It isn’t just the audience that has responded with enthusiasm. The critics—snobs, crowdpleasers, egomaniacs, and experts of all stripes—have lavished Pixar’s productions with rave reviews.

But whatever you make of the subtext, you’re likely to agree with the hard-to-please critics who embrace this dazzling—dare I say profound?—motion picture. No matter your age, you’ll probably find Ratatouille both satisfying and nourishing. In fact, it may be the first Pixar production more likely to win fans among adults than children. (At 111 minutes, it may test some toddlers’ patience.)

A few words about animation: Just when you think that Pixar has set an unsurpassable standard (Finding Nemo, The Incredibles), they astonish us with new innovations.

The most impressive aspect of Ratatouille‘s animation is its depth and color. When the Almighty sees the glory of a Paris sunrise in this movie, he might just give Pixar the controls for real-world artistry. The dark, reflective surface of the rushing stream that washes Remy away from his family of thieving rodents proves that even the gutter can be beautiful through the eyes of an artist.

Even more surprising is Pixar’s continuing progress in creating animated human beings. Ratatouilleintroduces two outrageous cartoon personalities—Skinner the diminutive head chef, and Anton Ego, the stilt-legged restaurant critic whose attitude fits his name (voiced with grandiose contempt by Peter O’Toole). Both of them command our attention even more powerfully than the fuzzy little critters. Ego, with his magisterial condescension and Nosferatu posture, deserves a place in the Disney villain hall of fame alongside Cruella de Vil and Captain Hook.

But Linguini (Lou Romano) is the main event. He’s the most reluctant of Disney heroes since The Rescuers‘ Bernard, but what he lacks in personality he more than makes up for in choreography. Cooking up a storm, Linguini flails about the kitchen like a marionette in the hands of a particularly animated (pun certainly intended) puppeteer. Remember when Steve Martin was possessed by Lily Tomlin’s ghost in All of Me? You get the picture.

It wouldn’t be Paris without romance, and this stew is spiced with the help of a beautiful, hard-working chef named Colette Tautou (Janeane Garofalo), who laments the difficulty of being a woman in the dog-eat-dog restaurant industry.

And as you watch Colette and Linguini work, you’ll be enthralled by the animators’ attention to detail. These kitchens bustle in a way that shows the animators’ research in some first-rate kitchens. Ratatouille is probably the first animated feature to deserve inclusion on the list of great “foodie” films, alongsideBabette’s Feast, Mostly Martha, Big Night, Like Water for Chocolate, Sideways, and Eat Drink Man Woman. Fine restaurants located alongside movie theaters are about to experience a boost in their business.

Enough about animation: Any movie helmed by Brad Bird is just as much a feat of storytelling as it is a triumph of animation. And Ratatouille is no exception.

From Cinderella to An American Tail, we’ve seen a lot of rodents on the big screen. (Watch for one clear visual nod of acknowledgement to Don Bluth’s The Secret of NIMH.) But Remy, voiced by comedian Patton Oswalt, is remarkable. Where most famous rodents are merely clever, Remy has a passion for culinary creativity.

As Remy tries to save his fellow rats from the humiliation of swallowing trash, he discovers what so many art lovers already know: It’s hard to teach good taste. To steal a phrase from Franky Schaeffer, this fast-food nation is addicted to mediocrity. As we content ourselves on junk food, avoiding the opportunity to experience new things and discover delicious, nourishing fare, we also demonstrate our lack of discernment in what we choose to watch on television, order from iTunes, or see at the movies. Excellence matters, says Remy. And he tries to awaken his friends to a new world of flavor. As he does, savory sensations are illustrated brilliantly through abstract explosions of color.

There is so much to enjoy and celebrate here, Ratatouille deserves more than a review: it could (and probably will) inspire books about creativity and good taste. First and foremost, it’s a story about claiming your passion, and pursuing it with excellence, whether you make big bucks or not. Children and grownups alike will learn the joy of adventurous taste—not just in the kitchen, but in art.

And as it urges us toward an appreciation of excellence, it also gives snobs a roundhouse kick to the palate. In the film’s closing act, the storytellers dare to address the role of the critic in society. They remind us that, while we should certainly set our standards high and muster the guts to call garbage what it is, we should also remember that criticism must come from a place of love and passion, not cynicism, arrogance, or condescension. We should recognize greatness, originality, and vision wherever we find it—whether it’s from an unknown Ukrainian director at the Venice Film Festival, or from an American storyteller inside Disney studios. It’s an ambitious subject for an animated feature. Handled with such grace and insight, it raises Ratatouille to greatness.

So go ahead, serve yourself a heaping plate of Ratatouille, which is likely to be remembered as 2007’s summer moviegoing peak. It’ll be hard for some to admit, but thanks to this Parisian fairy tale, Walt Disney Studios is once again the premiere filmmaking kitchen in America. Like those diners who swoon at the aroma wafting from Remy’s restaurant, moviegoers will keep coming back for seconds, and thirds, so long as Brad Bird is in the kitchen.

November 26, 2008 Make your case: Why We Love WALL-E.
Browse Our Archives
Related posts from Looking Closer